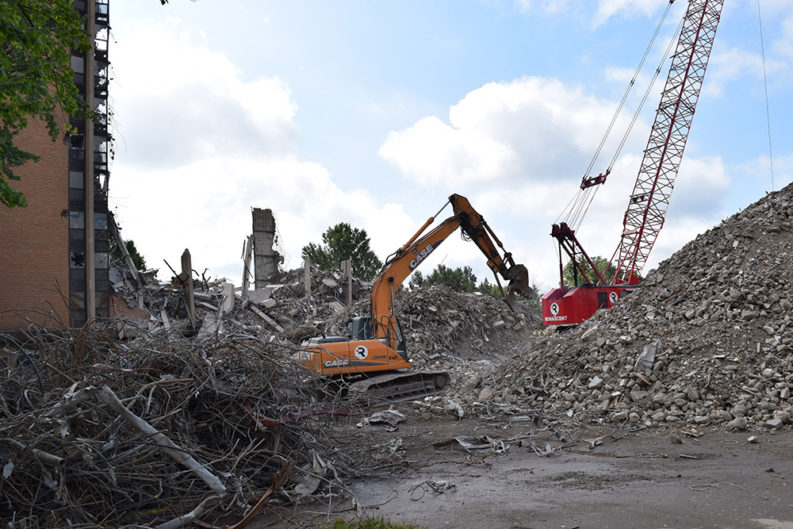 In August 2015, the University of Tennessee demolished the Apartment Residence Hall dormitories on its Knoxville campus, not long after the decade-older Shelbourne Towers were leveled. This in itself shouldn’t surprise anyone keeping abreast of the local news. The university’s most recent Master Plan—adopted after a rocky rollout during the 2011-12 academic year—had foreseen the discarding of Shelbourne.

It’s true that Shelbourne and the redundantly named Apartment Residence Hall (ARH) were admittedly humorless hulks, designed during what many consider the last century’s architectural nadir, one that regrettably coincided with the zenith of post-war campus construction across the country. (Shelbourne was originally a private senior residence and only recently added to the university’s building stock.) Yet, they were built to last. The slow and daunting demolition of the ARH attests to this. Moreover, when one compares the material quality of what was demolished to the physical and fiscal reality of the replacements, a pall begins to spread across UTK’s colorful multi-phase Master Plan. Indeed, in the 2011 Master Plan, only Shelbourne was slated for demolition; the ARH was budgeted as a “Near Term” $41,000,000 renovation project. So what changed?

A brief article in the Aug. 5, 2015 issue of the Knoxville News Sentinel did little to help explain the rationale for what is only the start of planned mass demolition of apparently all post-war high-rise concrete and masonry housing along Andy Holt Avenue.

But certainly this must not have been a recent discovery, something learned after the 2011 Master Plan was codified? While these claims may not be the equivalent of euthanizing someone because they need a new hip, it’s much closer than you’d think. 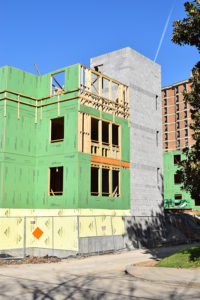 Why—at the state’s flagship campus that makes claims to “green” environmental practices—does it seem like a good idea to raze reinforced concrete and masonry dormitories that have lasted several generations and are quite capable of lasting several more (albeit in desperate need of renovation)? Why cart them off to a landfill and replace them with something intentionally inferior? Once you take into account that all old buildings tend to have old HVAC systems, that many concrete and masonry buildings have been renovated quite successfully during the past few decades, and that there are relatively inexpensive little digital devices that help bounce wireless communications even in the most challenging of interiors, one is left to wonder how such a monumental decision could have been based on what seems such a seemingly thin argument.

In the case of Shelbourne, this hundred-year-building has already been replaced with low-grade low-rise “courtyard” dorms, the architectural and material equivalent of something found in the terra incognita of Westland Drive. At the risk of stating the obvious, all buildings decay over time, beginning the moment they are finished, particularly if not properly cared for. The new dormitories intended to replace Shelbourne and ARH, however, are not only relatively maintenance-free, they are intentionally disposable—intended to last about 25 years, at which time they will be demolished and replaced by other 25-year buildings. Why?

In this second decade of the third millennium, advances in building technologies have advanced as much as certain aspects of medicine and other sciences. In 2015, a design studio of UT’s Governor’s Chair for Energy + Urbanism, Phil Enquist with Brian Lee (of Skidmore, Owings, and Merrill, Chicago), produced a “3-D printed” building, AMIE, in conjunction with Oak Ridge National Laboratories. But more to the point, during the 2014 fall term, professor James Rose worked with Keith Boswell FAIA of SOM’s San Francisco office and teams of College of Architecture and Design students (led by graduate architecture students) to reconceptualize and re-sheath one of the hopelessly frumpy TVA “towers” and the seawall-like plinth that adds a frothy chill to the end of Market Square. The Governor Chair’s Studio designs demonstrate how using existing technologies, one can make a fine work of architecture and a highly useful building complex out of something that is neither. 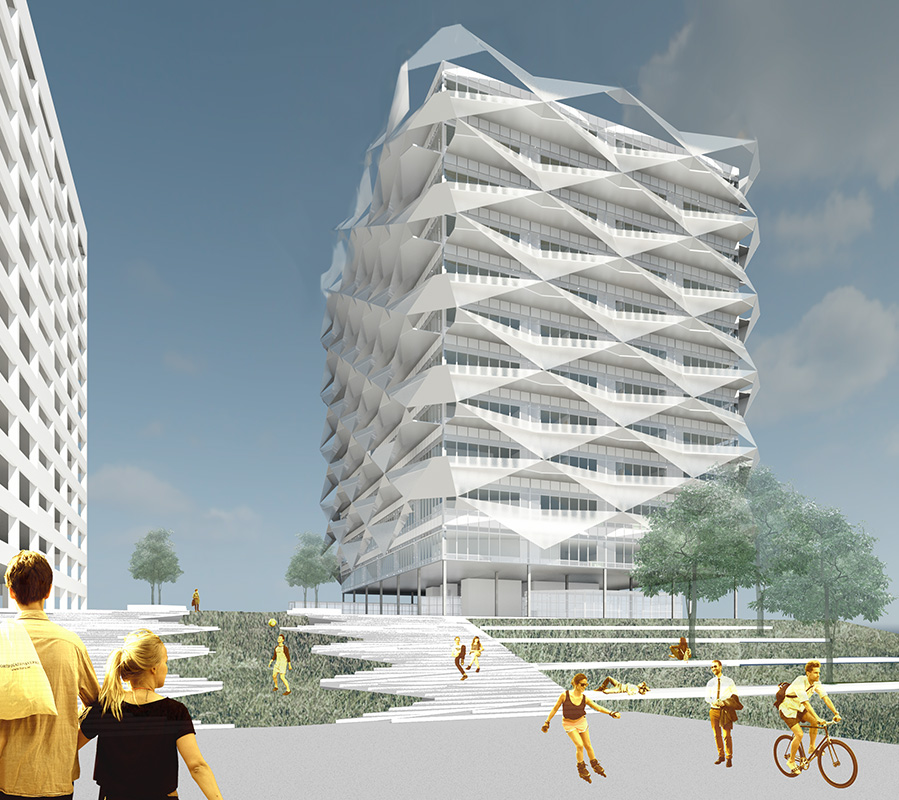 Build, maintain, retain: long the mantra for college campus infrastructure and the estates of the well-heeled, is now—in cases such as the existing UTK dorms—supplanted by build, raze, repeat. The reasons of this are several and certainly not solely the fault of those in charge of planning, design, and construction on campus. Our state is disinclined to adequately support the maintenance of existing buildings, regardless of their architectural merit. Moreover, with deliberate and sustained effort, university administrators may occasionally convince families or individuals of great wealth to subsidize the construction of new buildings and facilities; yet there seems little glory in underwriting the care and management of a building with someone else’s name on it.

A principle reason for this lack of concern is simple ignorance (even in one’s own belief system) at both the university and among the state’s citizenry at large. Tennessee is, in the main, a politically and culturally conservative state—a worldview in no small part grounded in the preservation of capital and maintaining cultural stability. And while our state is home to a wealth of excellent buildings, urban centers, and constructed landscapes, nonetheless we have not a single university degree-granting program to educate its future design professionals in the conservation and stewardship of these invaluable cultural artifacts. How can we expect administrators with educational backgrounds in finance, animal husbandry, or chemistry to make informed decisions on the embarrassment of riches that is this state’s patrimony—especially when the design and planning professionals to whom they so often look to for guidance are themselves unschooled in such matters? 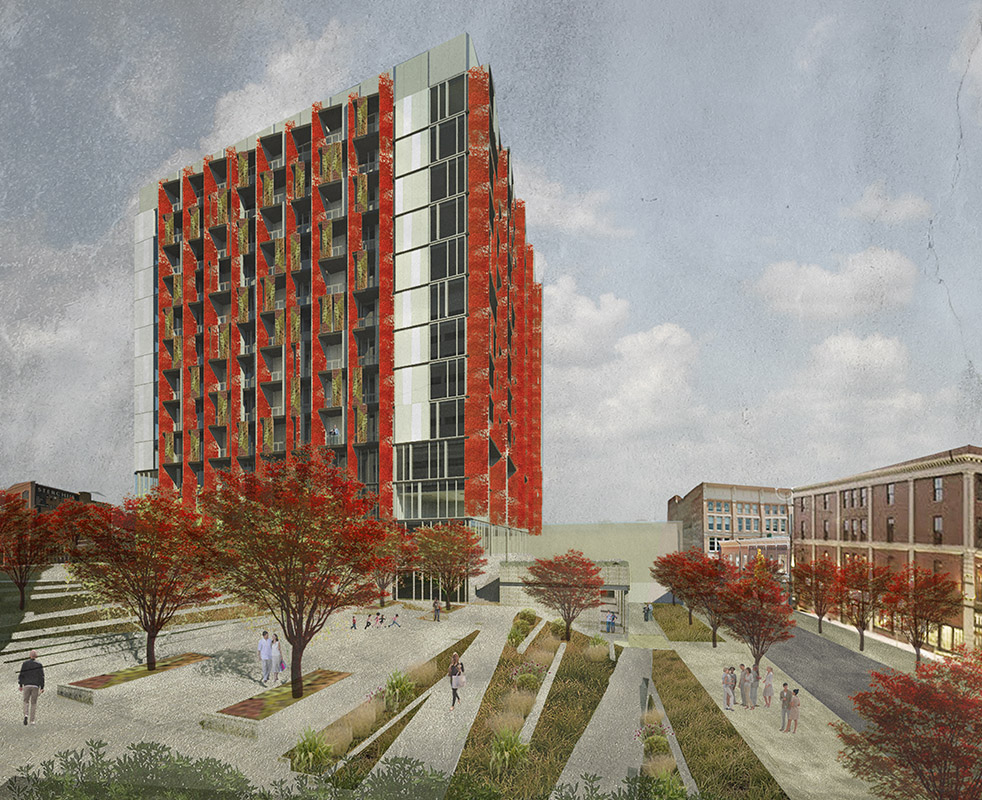 Of course, the problem is more complicated still for UTK’s administrators. Faced with the prospect of a growing building stock (the maintenance of which is constantly underfunded and often arrives too late), there is also the perceived need to create market-driven housing that rivals, or is superior to, places that students are currently choosing off campus, such as The Heights or Quarry Trail. One could argue that the moment universities re-conceptualized its student population as “customers,” the invisible hand of the market became increasingly opaque on college campuses everywhere. All one need do is visit the website of any middling college or university and you will be hard-pressed to distinguish the bulk of the images encountered there from those advertising a vacation getaway. Which is precisely why the bar was set so low for the quality of construction in the new residence hall while a premium was set on interior amenities. Meanwhile, the building’s exterior seems one part Potemkin Village, one part MGM back lot. The height of the buildings, for example, are entirely a function of building codes; had they been a single floor higher, the cheaper wood framing could not have been used for buildings that are, in effect, scenography.

It is not as if the university is making these decisions in the dead of night, nor without oversight, both on campus and in Nashville. In the case of Shelbourne, public hearings were held to first acquire, and then demolish the building. During a meeting of the Tennessee State Building Commission (established in 1955) on Jan. 14, 2016 to adjudicate the second phase of construction to replace the ARH the committee vice-chair, Lieutenant Gov. Ron Ramsey, earnestly inquired about the quality of the roofing material the architects intended for the new dorms. He seemed heartily satisfied that the asphalt shingles were of the 30-year variety owing to the nasty hailstorm Knoxville experienced several years earlier.

The difference between 20- or 30-year shingles in a storm of such magnitude is not the issue here, as both would fail. Rather, what is truly lamentable is that it did not register in the least for the Lt. Governor that one of the state’s most important institutions had—at the center of its decade-long building program costing hundreds of millions of dollars—planned buildings with roofs covered in the same “contractor-grade” material as Habitat for Humanity houses. While many of us live in houses with this sort of roof covering, it remains the lowest form of standard roofing material and something typically never used for multi-generational institutional buildings. When the lowest type of finish material is approved unquestioned to sheathe the highest level of building type, when decisions such as these seem normative to those empowered to oversee the cultural patrimony of not only a single campus, but an entire state, it is cause for concern. While one expects to see this lower order of design and construction along the edges of Northshore Drive or in the hinter regions of Cedar Bluff and scattered along Kingston Pike, it rightfully remains a shock when artifacts of this ilk rise between Cumberland Avenue and Neyland Drive. 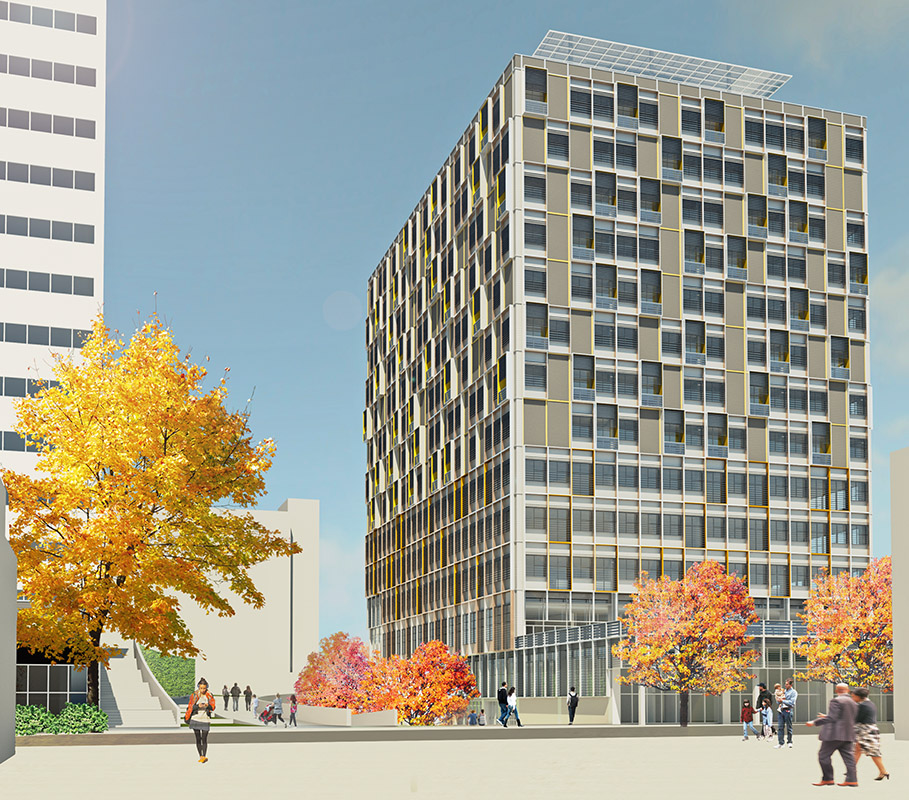