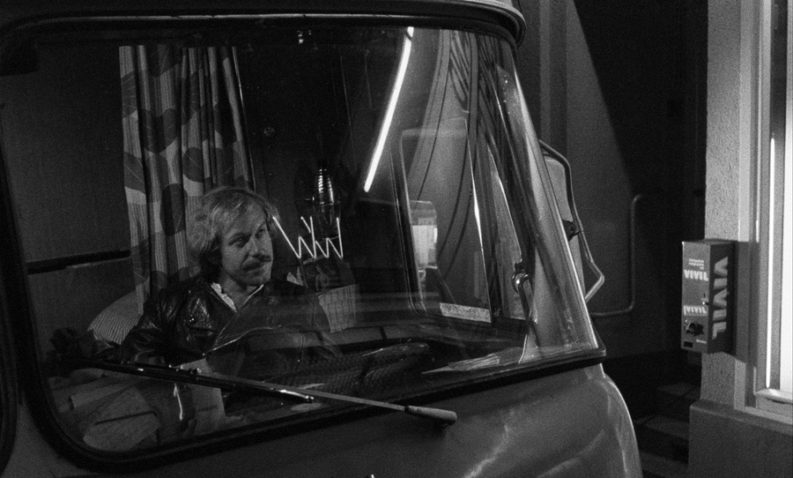 Wim Wenders: The Road Trilogy
This new Criterion package bundles three of Wim Wenders’ earliest feature films—Alice in the Cities, Wrong Move, and Kings of the Road, all made during the mid-1970s with overlapping casts and themes. It is a calming pleasure to accompany Wenders as he taps out the boundaries of the emotionally barren landscapes where he will spend so much of his career. Any of these films would serve as fair warning for Paris, Texas, which followed them by a decade.

While Wrong Move (1975) and Kings (1976) occasionally feel like academic exercises, Alice in the Cities (1974) is a treat. German journalist Philip Winter (Rüdiger Vogler, the male lead in each of these films) bails on an American assignment and an airport flirtation leaves him in charge of a 9-year-old girl bound for Europe. Back in Germany, Alice (Yella Rottländer) and Philip search half-heartedly for the child’s mother and grandmother.

Philip seems never to have had cause to care for anyone before, and though he’s too broke to spoil Alice, she delights at having an adult actually listen to her. The film pits roots against rootlessness and innocence against the longing for its end. Ultimately the film celebrates each of those elements.

A Whit Stillman Trilogy: Metropolitan, The Last Days of Disco, and Barcelona
Whit Stillman’s trio of 1980s dramedies are fresh out on Blu-ray and worth a rewatch. The deluxe art direction and cinematography render the posh digs and discos of these bored and precious young people beautifully unbearable. Stillman often draws comparisons to Woody Allen, but now that you can view this core of his career’s output at the comfort of a two-decade remove, it’s easier to see how closely Stillman aligns himself with the worldview of Noël Coward and even Jane Austen. The tropes and trappings of privilege will always be, at end, more burden than blessing.

Barcelona (1994), with its Cold War jingoism versus Communism, makes an even more successful time capsule than The Last Days of Disco (1998) and its predictably embarrassing soundtrack. Fred (Chris Eigeman) and Ted (Taylor Nichols) are American cousins reunited in Barcelona. Fred is a U.S. Naval officer on assignment, keen on making the most of his good fortune and lack of real responsibilities. Ted is a salesman for an American corporation, without confidence or respect for his own line of work. They are a believable odd couple. But instead of Felix and Oscar, who were truly annoyed by each other’s presence, Fred and Ted’s relationship is shaped primarily by grudges held over from their too comfortable formative years.

The Taviani Brothers Collection
The paisano brothers Paolo and Vittorio Taviani have been codirecting films together since 1962. Their method supposedly involves taking turns and directing alternating scenes as the other silently observes. Their subject matter and sugar-free method of presentation descend directly from postwar Italian neorealism. In Padre Padrone (1977), The Night of the Shooting Stars (1982), and Kaos (1984), we see that life is mostly difficult but eventually justified by fleeting moments of magic or beauty. Like the currently popular pseudonymous Italian writer Elena Ferrante, the Tavianis have been inspired by—and have given due credit to—the Sicilian playwright and essayist Luigi Pirendello. The most potent of these midcareer features is the three-hour-long Kaos, which dramatizes four of Pirendello’s most enduring short stories and a brief memoir.

If you found yourself unable to make it to the Mediterranean this summer, these sumptuous films might be a balm upon your land-locked spirit.