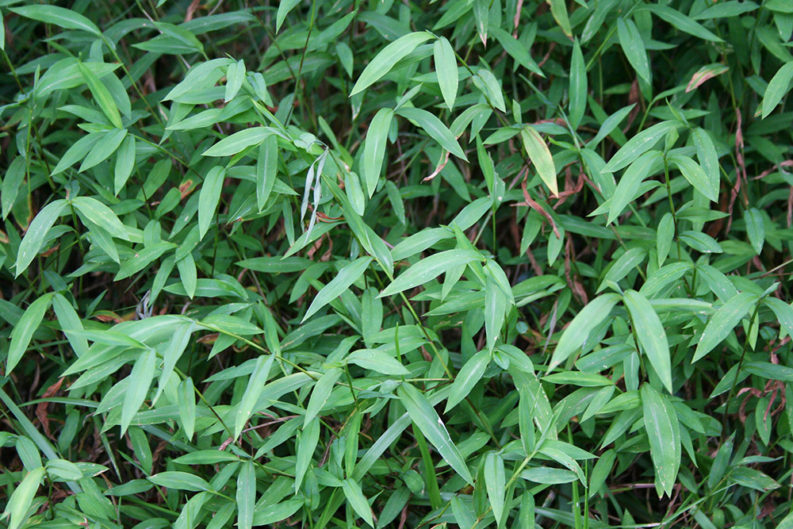 Xenophobia, the fear and hatred of anything that is strange or foreign, seems to drive the geopolitical upheavals plaguing our nation and others. Most of us would hate to be called xenophobic. Yet many of us are deeply concerned about the presence of certain plant species in places where they don’t belong.

There was a time when I might have argued that this amounts to botanical xenophobia, but eventually I saw the light. It seems the federal government did, too, about the same time. A 1999 executive order requires all federal agencies to have a program for identifying and managing non-native species and their impacts. The Oak Ridge Reservation—which includes Oak Ridge National Laboratory, the Oak Ridge National Environmental Research Park, and former federal manufacturing facilities that were part of the Manhattan Project—is one of the nearest examples of a large-scale effort to keep the alien weeds down.

Non-native species are those that become established in a place where they are not indigenous. Because plants tend to stay put, non-native plant invasions can be especially visible. Everyone knows about kudzu, and pretty much everyone hates it. When a vine is capable of covering and killing mature trees, engulfing buildings and abandoned cars, and taking over acres of land in just a few years, that vine is clearly a problem. But those in the know will tell you there are worse actors in the plant world, species that might look innocent enough but are causing undesirable ecological changes at many scales.

Japanese honeysuckle behaves similarly to kudzu. Its infestations are not as visible as kudzu at highway speeds, but it is much more prevalent across the landscape, growing under, over, around, and through all the other plant species in sun and shade. Chinese privet is likewise almost anyplace you look in the eastern U.S., changing understory habitats to dense shrubbery. These are two of the most common and hard to get rid of non-native invasives in North America, but there are many others that land managers and conservationists would like to see eradicated.

For many years ecologists hypothesized about what characteristics would make a species an especially successful invader, and what kinds of habitat would be most vulnerable to invasion. After many studies, the answers are not so surprising. Habitats rich in resources like water and fertile soils, where some kind of disturbance like fire or flood has removed some of the plant cover, offer opportunities for plant invaders to establish and thrive. Especially successful invaders are those that have lots of propagules, such as seeds, that easily disperse and grow quickly, robbing their neighbors of access to light, water, and nutrients.

It’s that part about disturbance that likely explains the particular problem the Oak Ridge Reservation experienced with non-native, invasive plant infestations. When the federal government decided to locate part of its Manhattan Project in East Tennessee, earthmoving on an unprecedented scale removed thousands of acres of forest practically overnight. The rapid, enormous influx of people and materials to the new city of Oak Ridge and its three huge industrial facilities brought non-native plant propagules along for the ride. Some, like periwinkle, were planted intentionally. Others, like Japanese grass, arrived as unseen contaminants in soil and straw brought in with other construction and landscaping materials. By 2003, at least 18 non-native plant species known to be significantly invasive had become pests on the reservation.

That’s when the Natural Resources Management folks for the Oak Ridge Reservation went into action. They first had to document which invaders were where and prioritize them based mainly on how widespread they were. Coming in at number one was Japanese grass (Microstegium vimineum), followed by Japanese honeysuckle, Chinese privet, and kudzu, in that order.

Starting in 2006, the Reservation hired contractors who do invasive species removal for a living. Working through the summer growing season, they mainly use herbicides to kill the invaders. That’s rarely a one-time solution, so several hundred acres are treated each year on an ongoing basis. That level of herbicide use can be disturbing to environmentalists, but herbicides may be the only effective remedy past a certain point of infestation. Also, the cost must be weighed against the benefit.

Once a non-native infestation has been effectively controlled, the native plants that held their own during the siege rebound remarkably. There are benefits for wild animals as well. Native plants often provide better food and overall habitat than non-natives. Dense stands of understory shrubs like privet interfere with the forest-to-field transition for wildlife movement across the landscape. Research is underway to study the effects of such barriers on the three species of bats on the reservation.

The best strategy for minimizing herbicide use is early detection and aggressive control. Vigilance concentrates on routes of incursion—the roads, trails, and waterways where humans and their vehicles can unwittingly harbor invaders.

Non-native, invasive plants are not inherently evil. They are simply doing what any form of life tries to do: gain as much territory and leave as many offspring as possible. But not being sentient creatures, as far as we can tell, they cannot negotiate or cooperate with their neighbors, agreeing to share space and resources. As such, they are biological pollution that displaces native species. Eradication is not possible for most of these invaders, but land managers at Oak Ridge and elsewhere are fighting the good fight to keep them at bay. We can all do our part by employing the stitch in time principle to weed them out early and avoid buying landscaping plants that are not from around here. We’re not being xenophobic, but we are looking out for our own.