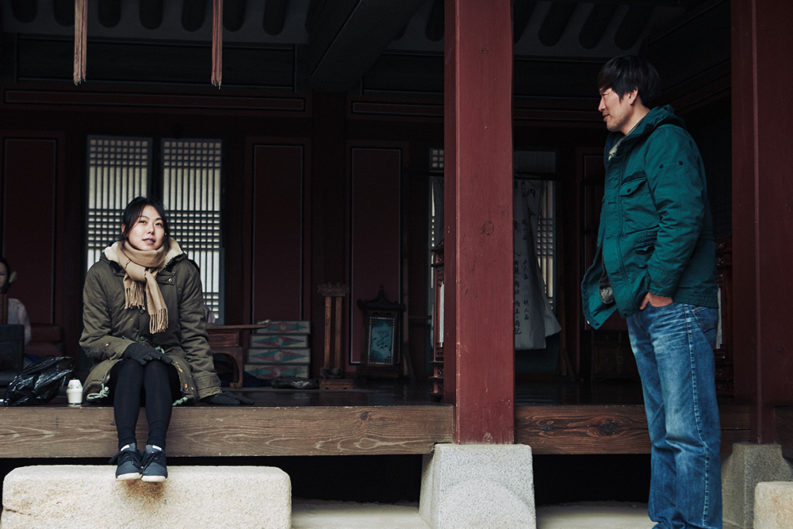 Who hasn’t had a chance encounter with someone who sends the pulse racing only to find any budding rapport falls apart in embarrassing disaster? And what wouldn’t you give for one more chance to not offer that opinion, or to turn down that fourth drink? The idea of a romantic do-over has served as the germ of a slew of romantic comedies, and it also shapes the twist to Korean writer/director Hong Sang-soo’s new film Right Now, Wrong Then. But Hong is after much more refined, and elusive, revelations from the cinematic second chance.

Art-house film director Ham (Jung Jay-yeong) is hosting a screening of his latest film in a new town, where he meets and chats up lovely local Hee-jung (Kim Min-hee). They have coffee, they talk, they walk, he praises her paintings, they get sushi, they talk some more, they drink. She seems sweet, if perhaps a bit ingenuous. He comes across as pleasant, but maybe too much so—like the kind of thirsty front one might put on for a beauty who could be a decade younger or more. He pounds soju and starts to slur. She drags him to a friend’s gathering, where his praise for her work is busted as interview boilerplate and his infamy as a womanizer is revealed. He ends his night alone, and his trip in ignominy.

An hour into Right Now, Hong restarts the movie—title card, theme music, and all—and throws Ham and Hee-jung back together. But it isn’t a simple Groundhog Day-style rewind. Some elements in this take of their story change or disappear, and it’s unclear whether they’re just elided, or, in this version, they never existed. More importantly, Ham actually criticizes her paintings instead of just flattering them, flaring her temper and risking getting kicked out of her studio. Hee-jung is more assured, and more forthcoming, talking about her own drinking, and about her absent father. In place of clumsy come-ons, Ham blurts out his love for Hee-jung, and in the next breath reveals that he’s married with kids. It makes them both sad, but not completely dissuaded.

Right Now has the stately progress and plain-Jane surface look of a tedious indie, but Hong and company are subtly on their game here. The director makes use of blatant zooms to bore in on the key characters in some scenes—and to perhaps poke pilot holes in the film’s veneer of sober realism. Subtle cues underline the more obvious differences between the two versions of the story. When Ham’s drunkenness rears its head in the first hour, Hee-jung swivels slightly away on her barstool. In the second hour, it’s his direct gaze that makes her pivot an inch or three.

Yet you sit through an hour of banal romantic fumbling before you get to the ambiguity, and emotional gravity, that lends Right Now, Wrong Then its beguiling complexity. Not that there aren’t compensations throughout the first hour, especially some moments of exquisitely dry wit. But the first half of Right Then is a movie you don’t really want to finish, while the second half is the movie you wish the first half was.

And maybe that’s Hong’s point in the end: Honesty and forthrightness pay off for both characters, if not necessarily through the expected romcom formulas. But thinking of the film as a simple polemic—basically, an elaborate episode of Goofus and Gallant—is far less satisfying than puzzling over its oddball narrative physics. As good as it is to see Ham and Hee-jung get another chance, and to see where they end up, Right Now almost can’t help but make you question the point of the journey.

The Public Cinema presents Right Now, Wrong Then on Sunday, Aug. 28, at 2 p.m. in Room 109 of the University of Tennessee Art and Architecture Building (1715 Volunteer Boulevard). Admission is free.