After a Decade, Change Remains the Only Constant for Hudson K - The Knoxville Mercury 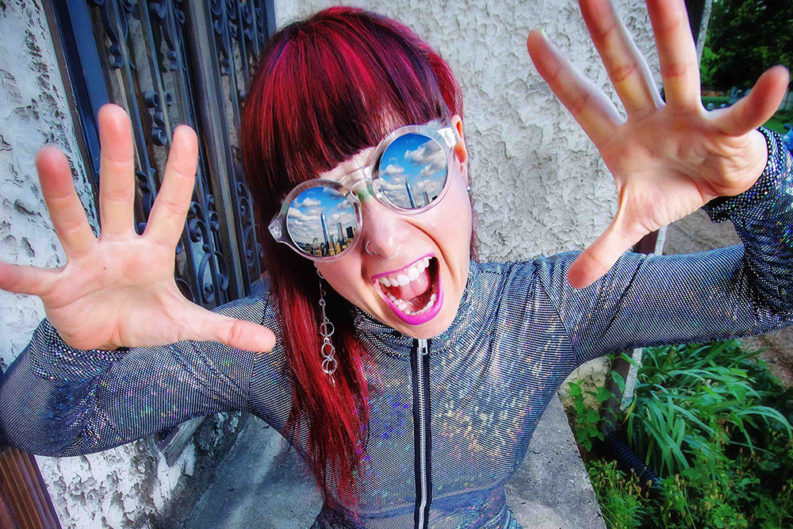 Christina Horn’s powerful voice and funky keytar have set synth-rock band Hudson K apart in the Knoxville music scene for a decade. But it’s still hard to predict where the band’s upcoming record will take its sound, because Horn prides herself on trying to constantly evolve as a songwriter and musician.

“I’m a bit of an experimenter and mad scientist, so to speak,” says Horn, who basically plays all the instruments in the band electronically—except the drums, ably driven by Nate Barrett. “I think I’ve always been inspired by artists like David Bowie or Beck. Each time they make a new thing, they kind of challenge themselves to make something a little bit different.”

Horn certainly reinvented Hudson K between the 2009 album Shine, which had a chamber pop feel, with acoustic piano, flute, and cello, and 2013’s Ouroboros and the Black Dove. (The name Hudson K is a mashup of Horn’s Northern roots and her adopted Southern hometown; she grew up in the Hudson Valley of New York, but after 16 years in Knoxville, she considers herself to be from here—thus the K.) In between the two albums, the band shrank and the reference points moved from the jazzy late 1970s into early 1980s new wave and electronic pop, with a twist of punk energy.

The shift was partly creative, partly practical, Horn says. Lots of band members were leaving because of relocations and family commitments. Barrett has been the only constant.

“It’s hard to take four or five people on the road, especially when there are babies,” Horn says. “I decided to be all the instruments. Since I started playing around with electronics, I’ve been trying to find my voice. It’s a balance between avant-garde music I like but something that you can move to.”

Horn, who studied piano at the University of Tennessee, writes and produces all the songs, with an emphasis on danceability. She started playing the keytar because she wants to be able to dance herself while performing, instead of being stuck behind a keyboard.

If you haven’t seen the keytar in action, it looks like a cross between a guitar and a keyboard. But it’s not both. It’s neither—it’s a plastic box with nothing inside. It wirelessly controls the music from Horn’s computer, triggering samples, changing instruments, and more.

“I found it on eBay, and at first Nate was like, ‘No! We’re not bringing back the ’80s.’ But it’s a practical instrument that allows me to jump around,” Horn says. “It’s super fun.”

Despite its rewards, life as a female independent artist isn’t easy. Horn says she still meets a lot of people who assume she’s just a singer who shows up for shows.

“They’re surprised I book, manage, drive the van, write the songs, and produce,” she says. “It’s been difficult being female in a world where, when you stand up for yourself, you’re considered a bitch. I like a challenge, though.”

In Knoxville, the bigger challenge is playing synth rock in an Americana town, Horn says. But Hudson K even played the Dogwood Arts Festival’s Rhythm N’ Blooms Festival this year, bringing Horn’s wails, echoes, and reverb to listeners who might never have found it otherwise.

Throughout the band’s evolution, the constant has been Horn’s dark, powerful voice, reminiscent of Siouxie Sioux. She and Barrett thrive on performing, which is part of why it’s been so long since the last record, but they took this summer off from touring to write songs for a new album. Like Ouroboros, this one is likely to be released on vinyl after a presale campaign this fall. Advance purchases will fund the recording of the album.

What can we expect from the songs? Further experimentation with sound, and topics entwined with current events (also a new direction for Hudson K). The songs are related to “the current political state and humanity and how we treat each other,” Horn says. “I can’t help it. … I’m experiencing these feelings in my own family, like, ‘I despise you but I love you.’ How can this be?”

This weekend, Horn and Barrett will perform as part of Blankfest, a music festival hosted by Blank newspaper that runs from Friday, Aug. 26, through Sunday, Aug. 28 at various Market Square venues. (Hudson K plays at Scruffy City Hall on Saturday, Aug. 27, from 10:30-11:15 p.m.) Horn, who occasionally writes for Blank, says to expect a fiery rendition of some of her band’s new material at Blankfest, as an expression of gratitude to Blank founder Rusty Odom.

“He has put his heart and soul into putting together this performance, so we will just throw it all out on the table,” she says.