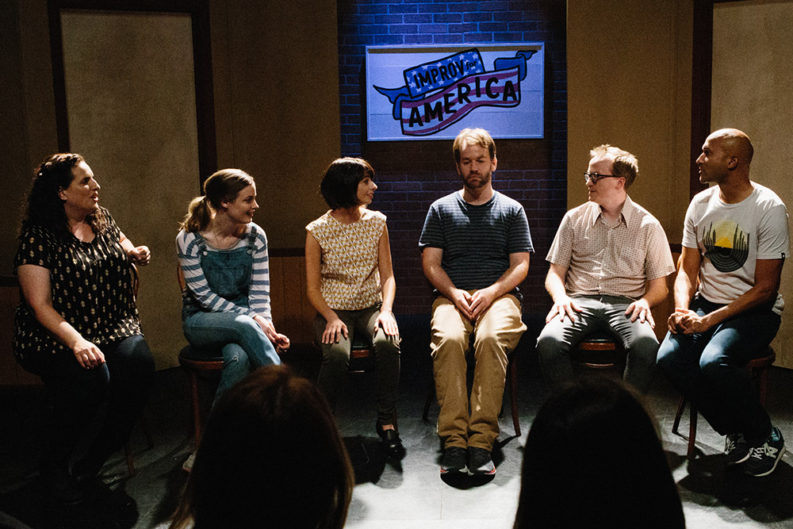 Comedy is a grueling business, as a barrage of recent television shows ranging from 30 Rock to Louie has worked to remind us. Neither as funny as the former nor as sardonic as the latter, Mike Birbiglia’s Don’t Think Twice, about a troupe of improv performers striving for their big break in New York City’s comedy scene, occupies a niche of its own. It’s a simultaneously gentle and unsparing film that uses the art and commerce of improvisational comedy as a window to something far more universal. In spite of its ensemble cast of comedians and comic actors, it’s an uncomfortably relatable and sometimes stinging experience for anyone slogging away in the trenches of a creative endeavor.

Birbiglia’s second film expands the focus of his first, 2012’s Sleepwalk with Me, which was essentially an adaptation of his popular one-man show. This time he widens the scope to include a company of six struggling improv comics who are collectively known as the Commune. When they’re on stage, as an opening primer explains, it’s all about the group—they’ve been performing together for years, and they live for those moments in front of an audience when an on-the-fly joke turns into something at once fleeting and memorable. In their equally intertwined private lives, though, it’s their flaws that define them: Group mentor Miles (Birbiglia) has grown tired of watching his mentees land televisions gigs while he’s still teaching improv; Jack (Keegan-Michael Key) is all too quick to break improv’s cardinal no-showboating rule; Jack’s fellow troupe member and live-in girlfriend, Sam (Gillian Jacobs), has an aversion to growing up and a tendency toward self-sabotage; shy Allison (Kate Micucci) is a talented cartoonist who’s spent nine years on an as-yet-unfinished graphic novel; doormat Bill (Chris Gerthard) is terrified his father will die thinking he’s a failure; and Lindsay (Tami Sagher), the only one of the bunch whose affluent family shields her from the realities of the starving-artist game, has trouble going for broke when she’s anything but.

They’re a weirdly codependent group, but all that begins to unravel when two of them get a shot at improv’s golden fleece: a cast slot on Saturday Night Live. (Here it’s called Weekend Live, but only the name has changed.) One of them eventually gets the coveted television gig, sending the other five into paroxysms of jealousy, desperation, and gloomy self-evaluation.

Each character is deftly written and performed, but Don’t Think Twice is ultimately less democratic than its ensemble cast might indicate. The focus narrows on three characters—Miles, Jack, and Sam—as they each respond to the pressures of their intensely competitive world. Unfortunately, this means Micucci, Sagher, and Gerthard—all gifted actors and comedians—are sidelined, but maybe that’s inevitable in a movie whose central premise is that not everyone gets their moment in the spotlight, no matter how much they deserve it.

At its furthest edges, Don’t Think Twice is about the things a performer inevitably sacrifices for job security or even stardom. Really, though, it’s more concerned with the ones who don’t make it—as one troupe member’s star rises, he becomes less and less of a presence, both in the film and in the lives of his one-time improv partners. It’s a bittersweet, often melancholy look at a struggle that’s familiar to anyone who’s watched a friend’s career kick into high gear. Sure, you’re happy for them and you know they’ve earned their success, but it’s hard to silence that petty, niggling inner voice that says it should have been you instead.

It’s that part that Birbiglia excavates and anatomizes with remarkable insight, sometimes in ways that are uniquely uncomfortable. (An awkward encounter with Ben Stiller, who plays himself, is a highlight of the film, and one of the most cringe-inducing scenes of the year.) And yet, to the writer-director’s immense credit, Don’t Think Twice treats its characters kindly. These might be the kind of people many of us would pointedly avoid at a party, but Birbiglia and his cast render them with such empathy and dignity that it’s a pleasure to spend 90 minutes in their presence. It might be one of the most melancholy comedies you’ll see this year, but it’s also one of the most revelatory and compassionate ones.