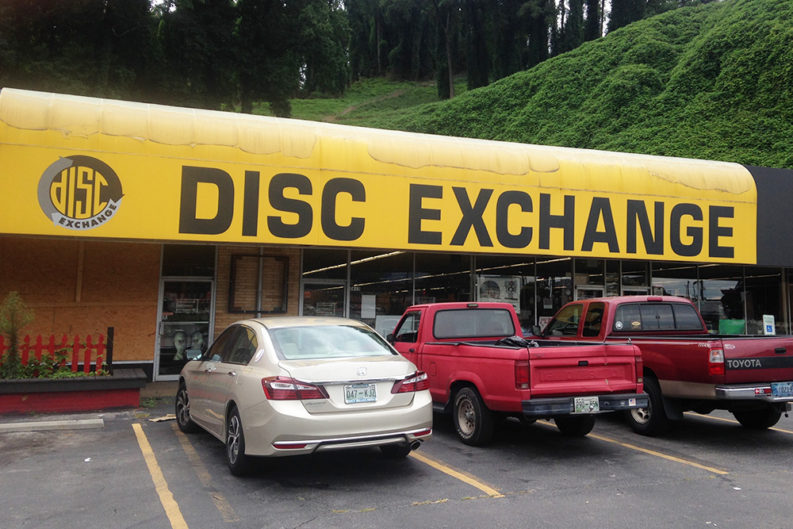 Last weekend, the Disc Exchange in South Knoxville experienced a time warp to 1995: The parking lot was full of cars each day, music lovers browsed the aisles, and lines formed as shoppers carried their treasures to the counter. But the transformation was fleeting and the mood wasn’t altogether celebratory. Many of the customers were actually paying their final respects to the last locally owned record store to offer new releases on CD, while others were taking advantage of its sudden 40-percent-off liquidation sale.

After nearly 30 years of slinging silver discs—the last 25 at their Chapman Highway storefront—owners Allan Miller and Jennie Ingram announced on Friday that they were shutting down the blazing yellow store that has been an integral part of Knoxville’s music scene. The news burned through social media circles, particularly those of its former employees, many of them local musicians who relied on the Disc Exchange for their income, record sales, and show promotion.

The resulting crowds were a bittersweet reminder of the days when physical media was the only game in town and consumers would buy their music in the real world—sometimes even conversing with other humans in the process. But there was one huge difference between then and now: In ’95, the Disc Exchange employed 42 clerks between two stores; in 2016, the store was down to five. On Friday evening, the two sales people on duty seemed not a little frazzled by the sudden influx of shoppers.

“It used to be like this every weekend—people lined up at the counter,” says Ingram with a rueful chuckle. “We forgot what it’s like to have to actually whittle the line down real fast. It’s been sad this week, but it’s been fun.”

Ingram says she and Miller had been mulling the decision for a long time. The reason why is no secret—digital downloads and streaming have upturned a once reliable retail industry. Further affecting the Disc Exchange’s declining sales was the two-year shutdown of Henley Bridge, the main conduit to South Knoxville, while it was being rebuilt. Even after the bridge reopened in 2013, customers still weren’t making the trek southward, having found other ways to get their music, Ingram says. But since the announcement, at least, droves of shoppers have remembered their once-favorite music outlet.

“It’s interesting—people are coming in and buying stuff now since it’s all on sale, and they say, ‘I think I might be part of the reason y’all are going out of business. I love this place, but I haven’t been here in years. I’ve just been buying digital, and I’m sorry!’” Ingram says. “They knew we were here, but buying online is so easy and so tempting, I don’t blame them at all.”

Miller and Ingram originally began selling CDs out of their house in South Knoxville in 1987 as the smaller, more convenient discs began dislodging vinyl LPs as the format of choice. In that primordial, pre-Internet era, they hawked CDs by word of mouth—putting out a mailer with lists of titles and advertising on campus.

“I remember going out during registration one year, and we’d stand at the doors as people came through, and say, ‘CDs, CDs, CDs!’” Ingram says. At first, the couple would actually hand-deliver CD orders. Later, they filled up some racks at a video-rental business behind the Chapman Highway Shoney’s—and were so successful that they moved to their own storefront across the street, a former Cas Walker grocery store. In 1994, they expanded to a second location in West Knoxville, which lasted until 2008.

Ingram says there’s no set timeline for the Disc Exchange’s shutdown—it mostly depends on how fast they sell their inventory. “Maybe by the end of September, maybe even mid-September. We just don’t know–it’s a mystery,” she says. Until then, music buyers can relive their memories of shopping in a new-music store, one last time.