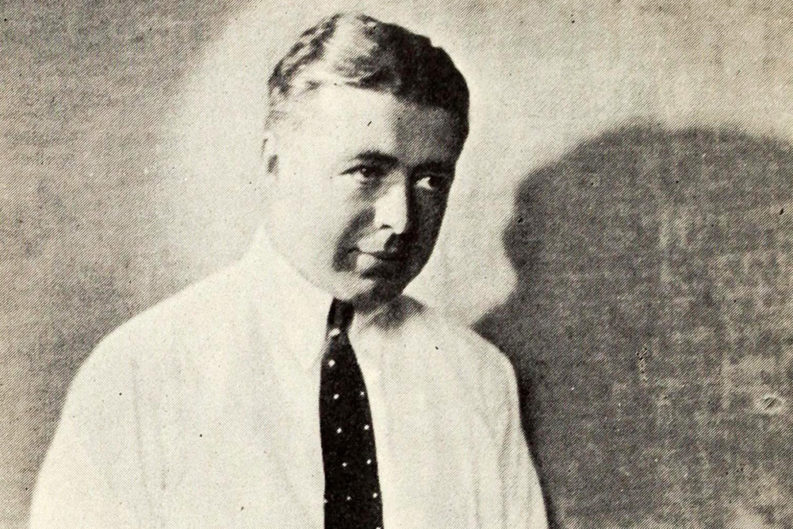 By 1959, former Knoxvillian Clarence Brown had been retired for seven years. At the time, there wasn’t a whole lot of interest in past masters of the cinema, especially those who started out in the silent era. But there were some pioneers who recognized the importance of early cinema. Kevin Brownlow, in England, was chief among them.

That year, Brownlow discovered Brown’s 1925 film The Goose Woman. He mentioned his find to a friend at the British Film Institute, who surprised Brownlow with a discovery of his own: a print of Brown’s 1925 film Smouldering Fires, which had recently turned up on an ostrich farm outside of Johannesburg, South Africa. It, too, impressed Brownlow, but it remains a mostly forgotten work in Brown’s filmography. Reed Massengill is hoping to correct the oversight.

Massengill, a writer and photographer, was working on an upcoming book about Brown, to be published by University of Tennessee Press, when he came across a remarkable find on eBay: a 16mm print of Smouldering Fires. He already had a bootleg DVD of the film, but it was sourced from a shabby print. This weekend, the Tennessee Archive of Moving Image and Sound will host a screening of Massengill’s newly acquired print as part of the East Tennessee Historical Society’s East Tennessee History Fair.

“Given that most films of this era were left at the end of the line when they’d run their course, or were cannibalized for their silver content, or otherwise just deteriorated to dust in the can, it’s remarkable that the print I have survived,” Massengill says. “It was a 1950s- or 1960s-era school-rental print, which I believe wasn’t often rented or screened. I wouldn’t have bought the print if I didn’t think it was exceedingly rare in any format, and my print is certainly in better condition than the print used to make the DVD bootleg that circulates.”

The only known 35mm copy resides in the vaults of George Eastman Museum, and it is incomplete, with Italian titles. Even 16mm prints in good condition are exceedingly scarce; a review of a screening in London last year, presented by Brownlow himself, noted, “It was very hard to project and the Cinema’s projectionist in addition to spending days restoring the stock also had to proceed very cautiously during the screening with the odd stop and start.” Massengill’s print displays few scratches—it ran through the Tennessee Theatre’s projector without a hitch.

Smouldering Fires is an old-fashioned melodrama with modern touches. Pauline Frederick plays Jane Vale, a 40-year-old factory owner who falls in love with a younger employee, who in turns falls in love with Vale’s even younger sister.

“I believe there are several things make Smouldering Fires unique and special,” Massengill says. “First, it went into production in August 1924, which means that women in the U.S. had only earned the right to vote four years earlier. Some may think Brown used a heavy hand in shaping his lead female character, but his depiction of a middle-aged woman leading a factory workforce creates quite a different character from the then-typical depiction of women on the silent screen, who were generally virgins—think Lillian Gish or Mary Pickford—or vamps—think Pola Negri or Gloria Swanson.

“I think Brown was progressive and ahead of his time. I think he took what could have been a little, forgotten film and made it something great.”

Smouldering Fires will screen at the Tennessee Theatre as part of the East Tennessee History Fair on Saturday, Aug. 20, at 11:30 a.m., with live musical accompaniment on the Mighty Wurlitzer by Freddie Brabson. At 2:30 p.m., TAMIS will screen Silent Stomp, a compilation of home movies of downtown Knoxville in the 1920s and ’30s, with live musical accompaniment by Todd Steed.