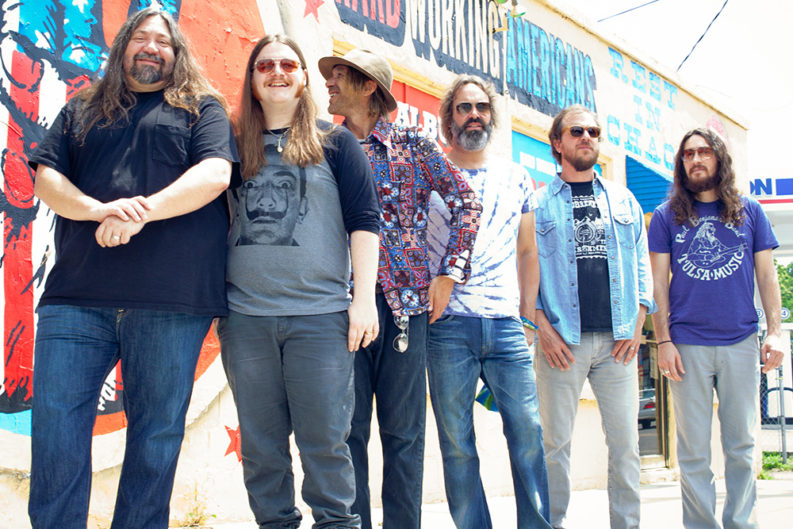 Sometimes a new album seems like just the right record at just the right time. The Hard Working Americans’ Rest in Chaos, arriving during a season of political frustration and outspoken populism, might be one of those.

“There is definitely mischief in this record, and with the band, because we’re a mischievous bunch of people—we’ve been around a while,” says guitarist Neal Casal. “Whatever the case is, just playing it safe and going straight up the middle is not the way to go, particularly now with the continued homogenization of our entire world.”

The Hard Working Americans are a minor roots-rock supergroup, formed in 2013 by Casal (who also plays in the Chris Robinson Brotherhood and was in Ryan Adams’ backing band, the Cardinals, in the ’00s), Nashville singer/songwriter Todd Snider, Widespread Panic bassist Dave Schools, drummer Duane Trucks (the younger brother of guitarist Derek Trucks), and Great American Taxi’s Chad Staehly on keyboards. On Rest in Chaos, the band’s second album, the Americans get contributions from Elizabeth Cook, who adds vocals to “Massacre,” and the late Guy Clark, who plays guitar on a rendition of his song “The High Price of Inspiration.” Clark died just a few days after the album was released.

“You can’t have an acoustic guitar and be writing songs and not know who Guy Clark is,” Casal says. “When I saw him in the studio, he was an old man, not that young songwriter on the cover his album Old No. 1. There’s a full circle kind of thing that happens to old songwriters like that, a sadness and a heaviness. Those writers laid down their lives in their words, and when you see them at that old age, they’ve become their songs. They are their own stories, these forgotten characters, salty and drifting.”

Rest in Chaos is a soaring piece of modern rock, one that taps into a deep vein of American music spanning the Grateful Dead, the Black Crowes, perhaps even a dash of Steely Dan. Those inspirations are reflected in the guitar work of Casal, who might be the most underrated guitarist in 21st-century rock ’n’ roll. Snider’s rough-around-the-edges fusion of Louisiana blues rocker Papa Mali and Mark Knopfler adds devil-may-care attitude to “Something Else” and “Acid.” Altogether, it’s a mesmerizing album, and one that feels vital to the current Americana and rock scenes.

“It perfectly defines what the band is, and the age that we live in, just to scrap for whatever you can get now,” Casal says of Rest in Chaos. “In terms of musicians like us, who even knows what passes for music anymore? What are people into? What do they even remember? It’s about those core values representing what rock ’n’ roll should be about. For many, rock ’n’ roll doesn’t matter anymore. There are kids growing up now not knowing what it is.”

Casal points out that the band is made up of longtime touring musicians who have spent decades on the road, playing dive bars and vast stages around the world, and then some. They remind listeners that, no matter what the radio dial may indicate, rock ’n’ roll is still around and will be for a while. They reflect the values of the demographic they named themselves after.

“We’re the people under the radar, the people not at the top of the food chain,” Casal says. “We’re talking musicians, starving artists, weed growers—true creative people that aren’t getting the typical breaks. Those are the people that really keep this country running on that level. …

“We’re all huge music fans with big record collections, where we push our boundaries into other areas, like jazz and psychedelic. It’s that common approach to whatever we do, which is just be open to whatever it is.”

The Hard Working Americans and the Congress play at the Bijou Theatre on Sunday, Aug. 21, at 8 p.m. Tickets are $27/$30 the day of the show.