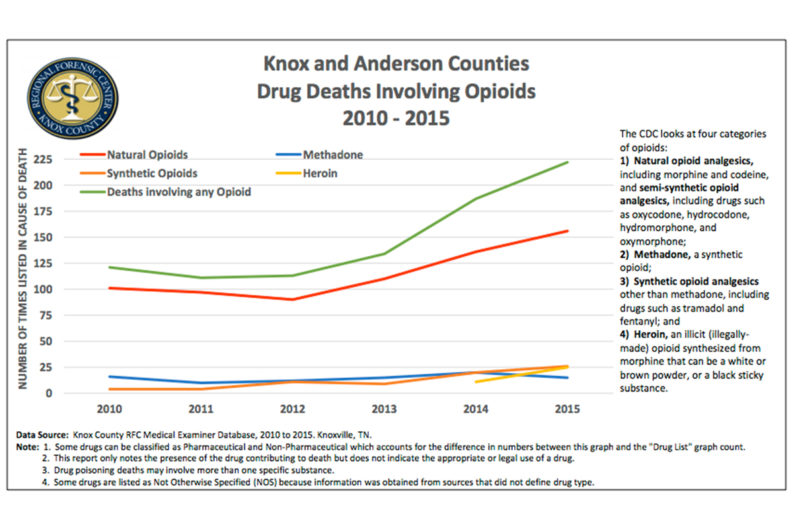 The costs of East Tennessee’s prescription drug epidemic has been well documented, but precise figures on how many lives it has claimed locally have been hard to come by. The state, on occasion, reports county-level data on overdoses and deaths, but there is no legal requirement to compile those figures, and state health officials have been unable to say when–or if–updated statistics will be available.

But a report out this week helps paint a clearer pictures into at least one specific area: drug-related deaths here in Knox and Anderson counties.

Between 2010 and 2015, the number of drug-related deaths in Knox County nearly doubled, according to findings from the Knox County Regional Forensic Center. About 75 percent of those were caused by prescription drugs, not illicit substances (though the prescription drugs could have been obtained illegally), according to the report released this week.

The most common killer across all five years: Oxycodone, an opioid prescription painkiller.

“Substance abuse is as old as mankind. So is the art of healing. Unfortunately, for the first time in our conscious history, right here in the United State, the healers may have unintentionally encouraged the scourge of substance abuse,” Medical Examiner Darinka Mileusnic writes in the report.

“Here in East Tennessee, the substance abuse victims were the ordinary people, the next door neighbors, our family members, the veterans, young and old, sick and apparently healthy who just briefly experienced some sort of pain,” she continues. “The common theme for many of these individuals was that they were either overprescribed pain medication or they “borrowed” someone else’s pain pills in order to self-medicate.”

At least 170 people died from drug-related deaths in Knox County last year, up from 87 in 2010. But that number is likely an undercount of the total number of overdose deaths since it only includes findings verified by the Medical Examiner’s Office. It does not include deaths in hospitals or other facilities who may not always report drug-related deaths as required.

In 2015, one drug-related death captured in the report was ruled a suicide, the rest were accidents, a class that could include overdose deaths and other mishaps related to drug use (it excludes car accidents). Anderson County has seen a similar increase, though the overall number of drug deaths there is lower.

So far, statistics for 2016 show drug deaths may continue to rise, though the report notes that medical examiners are already seeing an increase in deaths from illegal drug and not just prescription medications. That may be because Tennessee has continued to tighten regulations for pain clinics, and some health experts have predicted a rise in people turning to illegal substances like heroin as their supply to pharmaceuticals is snubbed off.

Among the report’s other findings:

It also notes  that the state of Tennessee lacks adequate data when it comes to drug-related deaths, an important component to identifying what areas are being impacted the worst and formulating an approach to address these problems. Among its recommendations, the report calls on the creation of a regional coalition to oversee data collection, training programs for physicians and other medical staffers to help them better understand reporting requirements for these types of deaths, and adequate funding to see these goals to fruition.