The silhouettes of Knoxville downtown buildings and its mountainous skyline are suggested in bright geometric shapes and faux-photographs in a new mural buried in downtown Knoxville. Painted this week by two California artists on one wall of the underground 100 block of Gay Street, its streaky reds and purples are visible only through the bank of glass windows in the basement level of the Emporium Center.

The mural now belongs to the city, which still owns this underground street, and the artwork’s $10,000 bill was split between Visit Knoxville and the Arts and Culture Alliance of Greater Knoxville, which also owns the Emporium gallery.

The street where the mural is displayed disappeared underground in 1919, explains Liza Zenni, executive director of the alliance. That’s when the city built a viaduct to safely conduct train passengers across the tracks from Gay Street to the depot on the other side. Because Gay Street was on the same level as the tracks, it had to be raised to make a bridge.

The old street is now lit only by light from the Emporium and sunlight that filters through glass pavers on the modern sidewalk above.

The dark nature of the space was a deciding factor in choosing the design by LC Studio Tutto, Zenni says. The studio is an art and design team composed of Sofia Lacin and Hennessy Christophel, who have collaborated on more than 70 murals and specialize in large-scale public art. 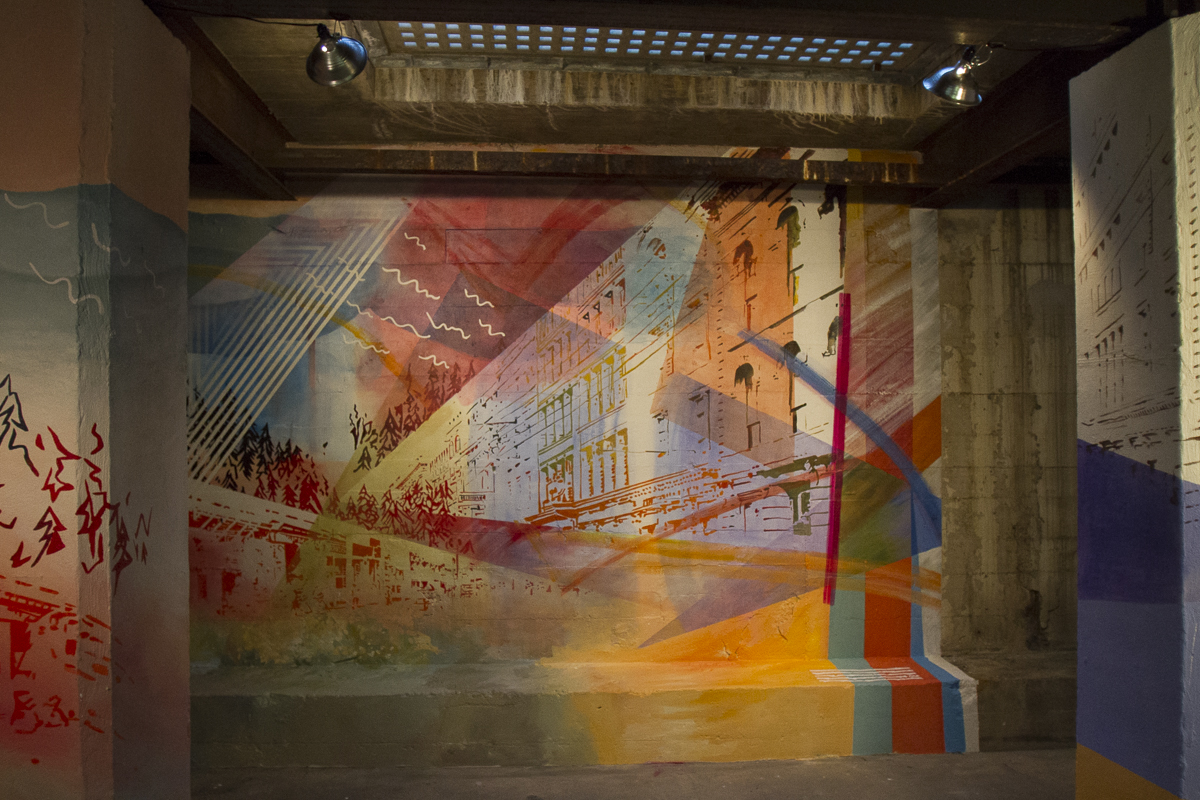 Zenni says the alliance received design submissions from three Knoxville artists, several in Nashville, and three more from other towns in East Tennessee. Others came from Asheville and more far-flung locales. The non-profit arts alliance has a focus on showcasing and growing the Knoxville-area art community, and Zenni says it generally favors local entries, just as 90 percent of its Emporium shows feature local artists. However, although she says the designs from Knoxville were lovely, “They kind of didn’t seem to add another layer to the city’s existing collection of public art…. We have wonderful murals already that are a collection of images or people thrust together,” she says, while the new mural is a large, united work of art.

The entire mural was painted by hand with brushes in just two and a half days. “It’s full of sharp angles and circles and triangles, but they are layered and… there to suggest contrast of our city against the sky – and from another angle, the contrast of our mountains against the sky,” Zenni says. “It is a joyful piece.”

Another criteria was that the art had to be bright because the display space is so dark. The Downtown Knoxville Central Business Improvement District approved purchasing some lighting that will help, but that hasn’t been installed yet, Zenni says.

“We needed to look for something bright enough to really sing from a dark place,” Zenni says.

Among the art designs submitted by Tennessee artists were a streetscape with trains and trolleys, a three-dimensional re-creation of the WNOX studios that were once in the Emporium building, and a three-dimensional trailer facade with wild sculptures visible through the windows, Zenni says.

The Alliance is hopeful that the underground street will be reopened to foot traffic in a few years when the Jackson Avenue viaduct is removed and Jackson Avenue becomes part of a greenway route. For that reason, the alliance rejected a few interesting three-dimensional proposals out of concern that they wouldn’t hold up well over time.

However, Rick Emmett, the city’s downtown coordinator, says that there has been no discussion about making the underground street accessible to the public during the Jackson Avenue streetscape work, set for completion in 2018. (The ramps will be removed after that.) He says opening the underground street on one end would likely create security concerns. (Part of the 100 block on the Emporium side is gated off by Sterchi Lofts to provide extra storage to residents, although Emmett says the city actually owns it all because it the street right-of-way was never surrendered.)

Zenni acknowledges that the alliance can’t be sure the street will ever reopen, “But we’d love it to be open if it can… we would love to expand the mural concept along that walkway” to the Jackson Avenue portion of the greenway, she says.

“We had to figure out what was going to work in this space for the long term. When all that came together, it was really no contest.”

She added the Alliance doesn’t want local artists “to be so cosseted that they aren’t exposed to that competition” from the larger art world, “so we decided to take the heat.”

“Do I know in my heart that there was disappointment?” Zenni says. “Absolutely. It was not something that we did without a great deal of thought, concern and love for our local artists.”

The mural is open to the public through the Emporium from 9 a.m. to 5 p.m. weekdays; the building hosts multiple galleries as well as the administrative offices of the Arts & Culture Alliance and offices for other arts and cultural organizations.

Or celebrate the mural’s opening on First Friday Sept. 2, from from 5 p.m. to 9 p.m., when music and hors d’oeuvres will be part of the opening for other new Emporium exhibits by artists Melinda Adams, Marjorie Holbert, Terina Gillette, Sheryl Sallie and Yvonne Hosey, as well as a Plein Air Show.