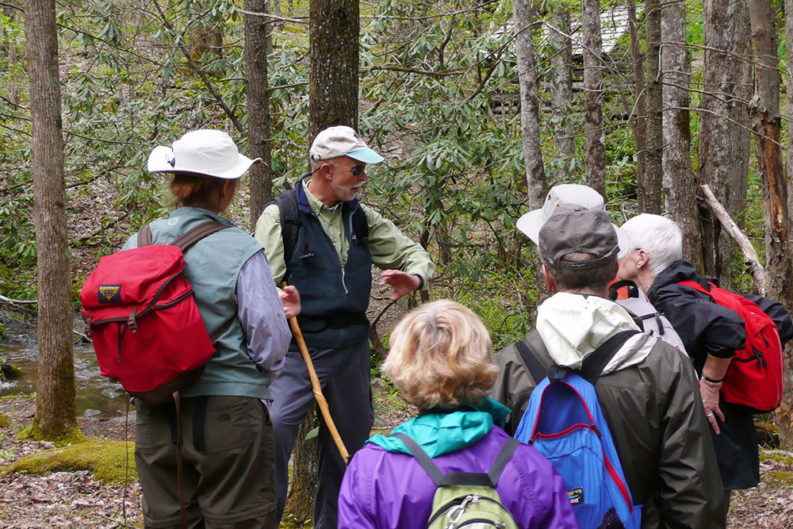 You’re wandering around in the woods, off trail, and you start to get a little hungry. Those red berries look delicious, but you’re not sure if they are safe to eat. You stop to ponder your surroundings. Thunder rolls to the west. At least you think it’s the west. You’re not sure which way you came in, and you think you hear something big rustling in the bushes up above you on the ridge. Something grunts like the bear that mauled DiCaprio in The Revenant.

If only you had taken a few of the 80-plus courses that the Smoky Mountain Field School offers, you might be better prepared for your outdoor adventure. Part of the University of Tennessee’s Department of Conferences and Non-Credit Programs, the field school, in its 39th season, partners with the Great Smoky Mountain National Park as an outreach program for lifelong learners.

Since this is the park’s 100th anniversary, Kathy and Joel Zachry, who direct the field school, are particularly excited about enabling people to learn about the extraordinary resources and beauty of the park in a compelling and fun way. The school introduced 10 new classes this year, five of which are upcoming this fall.

Kathy says the curriculum is designed for people interested in learning more about the Smokies firsthand with an expert along to teach them about subjects such as geology, edible plants, compass and map reading, bear behavior, and many others.

The course schedule runs from early March to early November, and the courses, most of which have a fee of $79, usually take place on Saturdays. Exceptions are the Mount LeConte Hike & Overnight at the Lodge and the Backpacking with Confidence Course, which take place over two days and cost a bit more.

One course that has returned after a hiatus is High Elevation Hiking: Experience the Geology of the Great Smoky Mountains (offered on Sept. 17). Dr. Gray Dean, a lecturer at UT, will lead students along the Appalachian Trail from Newfound Gap to Charlies Bunion, a hike that he chose for its “spectacular beauty,” its rock exposures, the high elevation that “allows for good views of macro geologic features,” and its demonstration of “mountain building processes.”

Dean says that while you can bring rock samples into a classroom for a conventional course, “in the field, you can actually see the context and relationships of rocks as well as their relationships to other processes such as ecology, hydrology, weather…[and also] how the rock weathers and breaks down, how it controls the shape of the landscape and subsequently the plants and animals, too.”

Joel, who along with Kathy, has taught in the field school since the early 1980s, says that the course offerings have become more diverse over the years. At first, he says, the courses were more researched-based, focused on pure science, but now the overall approach emphasizes “having fun while learning from an expert.” In addition to more scientifically oriented courses on geology, tree identification, and edible and poisonous fungi, for example, people can take an art course (photography, watercolor, sketching), a music course (Smoky Mountain Fiddle Tunes), nature photography, fly fishing, and courses on culture and history, such as the Cherokee Heritage Adventure.

Kathy says that the Mount LeConte Hike & Overnight at the Lodge, offered three times each year, usually fills up each time. She also says that the Bear U. curriculum attracts much interest. Coy Blair, who is the curator for Appalachian Bear Rescue, based in Townsend, will be teaching his course, Care and Release of Orphaned and Injured Black Bear Cubs, for the fourth time this August.

Blair, a Maryville College alum, says it is not only more fun for people to learn about bears outside on a hike, but they also remember what he shows them if they see it in the field. For example, on Chestnut Top trail, he was able to show students the wild grapes that are a food source for bears and point out the scat that indicated evidence of a bear’s having consumed the grapes. Farther up the trail, he showed students a bear den in a tree with claw marks on it.

Though enrollees tend to be between the ages 30 to 80, often professionals, the field school piloted a course for middle schoolers in 2015 to create future stewards for a national park about to turn 100. The Junior Naturalist Certification Program engages students in a five-day course that teaches them about outdoor safety and preparedness, the history and culture of the park, the plants and animals and landscape, while getting them moving around outside in the fresh air and unplugging them from the instant gratification of electronic devices.

Instructor Jeff Wadley teaches kids in Junior Naturalist Certification Program about aquatic life by collecting water samples trailside at Ijams Nature Center and having the kids identify all the living things in it.

The program, now in its second year, culminates in the presentation of the kids’ certificates by park Superintendent Cassius Cash and Chief of Resource Education Elizabeth DuPree.

Lilly Atchley, 11, who has taken the junior naturalist class twice, says it was “super fun,” in particular the hike with Cash this year. “We got to see what he was really like on the inside: funny, nice, kind, caring and a wonderful teacher. It was really cool to get to hang out with him,” she says.

Dr. Rosalind Hackett (head of UT’s Department of Religious Studies) has taken several courses in the field school and says she not only appreciates the expertise of instructors in a given field, but also their holistic approach to the outings. Hackett says that the field school has “enriched her experiences in the Smokies” and “given her a greater appreciation and a sense of pride about the region we live in.”

Founded in 1978 by Dr. Gayle Cooper, who would become its first director, and park Assistant Chief of Interpretation Don Defoe, the field school now has more than 700 participants per year. Despite the popularity of the school, classes are kept small, maximizing students’ access to instructors’ expertise. Among well-known past and current field school faculty are Bill Landry, Sam Venable, black bear management expert Kim Delozier, and Jeff Wadley, with 30 years’ experience in search and rescue with the Civil Air Patrol.

More info can be found at: outreach.utk.edu/smoky.