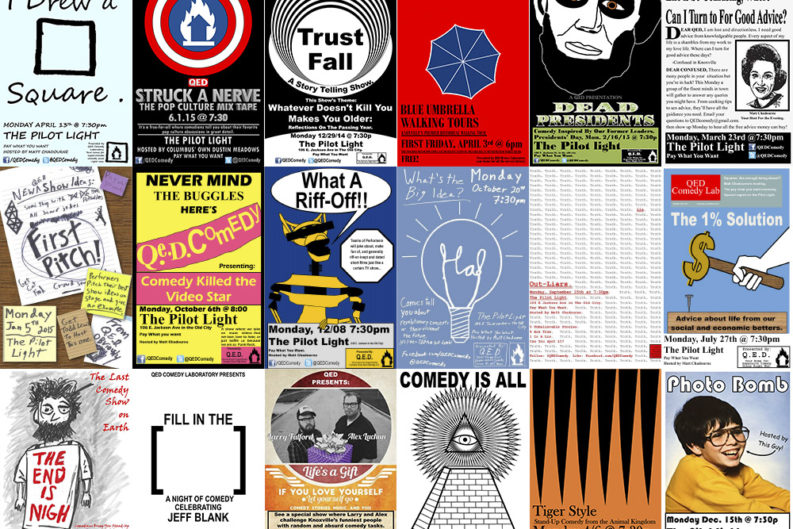 For the last two years, on Monday nights, the QED Comedy Laboratory at Pilot Light has provided a safe place for Knoxville’s comics—veteran performers and rookies, improv specialists and stand-ups, as well as a handful of aspiring audience members—to test some of their farthest-out comedy ideas in front of an audience.

“Some of the shows work really well and are amazing and magical. Some of them are terrible—like, ridiculously bad ideas,” says QED co-founder Matt Chadourne.

The show has been instrumental in attracting new performers and allowing experienced comics to refine their acts. But it’s coming to an end next week: The Aug. 15 QED show will be the comedy lab’s last. (It’s also, coincidentally, the show’s second anniversary—a remarkable run for Knoxville comedy.) Chadourne, who initially developed the idea for an experimental comedy show, is moving with his fiancée to Oxford, England, in September.

In 2014, Chadourne was performing as a stand-up and also with the long-running local improv troupe Einstein Simplified. He enjoyed both kinds of performance and wanted to participate in a local show that incorporated elements from both of them.

“It was annoying that there was no mix between the improv community and the stand-up community,” he says. “They don’t really overlap.”

So he joined forces with Tyler Sonnichsen, Shane Rhyne, and Sean Simoneau—all stand-ups, and all active on the local scene—and a handful of others to get QED off the ground.

Knoxville’s comedy scene has taken giant steps in recent years—at the turn of the millennium, there wasn’t a comedy scene here at all. Now there are a handful of monthly events, Einstein Simplified’s weekly improv show at Scruffy City Hall, a weekly open mic at Preservation Pub, frequent club appearances by touring professionals, and the annual Scruffy City Comedy Festival, which will celebrate its third anniversary in November.

But local comedy is still in the developmental stages, which means that a low-pressure, high-concept series like QED can be an essential incubator for both performers and fans. Chadourne’s colleagues will maintain a regular Monday comedy night at Pilot Light, but it won’t follow the same format. QED has been a group effort, but Chadourne has had an outsize influence on its creative direction; the show reflects Chadourne’s low-key, self-effacing, and sometimes absurdist approach to comedy.

“It won’t be QED, because that’s Matt’s brand,” says Sonnichsen. The new show will mix stand-up with a variety-show format, he says; they’ll announce details at the final QED show on Monday. “What we’re focusing on now is the final QED, to make the anniversary show and Matt’s last show a big blowout and a celebration of all the QED shows that we’ve done.”

QED could get pretty goofy, but Chadourne says the idea behind it was serious.

QED Comedy Lab celebrates its second anniversary with its final show at Pilot Light on Monday, Aug. 15, at 7:30 p.m. Admission is free, but donations are accepted. 18 and up.