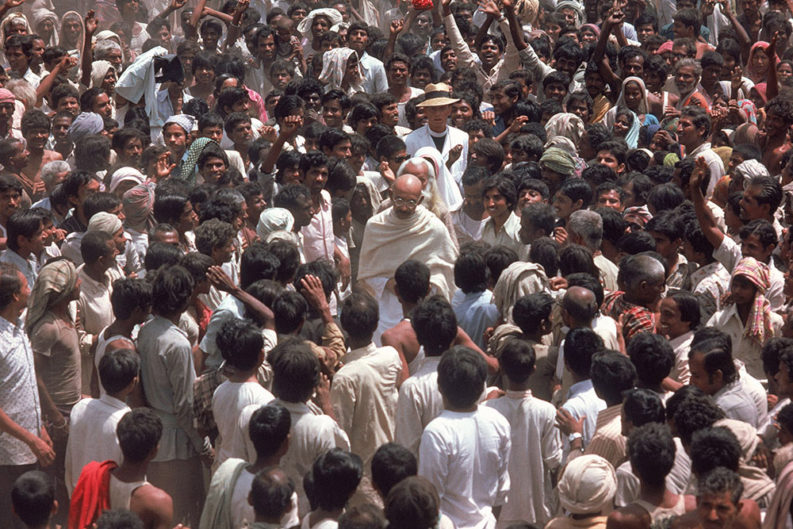 I once interviewed Fay Vincent, the former commissioner of Major League Baseball. The conversation involved matters ecclesiastical—Vincent had considered the priesthood as a young man, before becoming an executive at Columbia Pictures and going on to annoy countless baseball fans by kicking out popular players like Pete Rose and Steve Howe.

Vincent told me about an audience he once had with Pope John Paul II at the Vatican. Vincent had hoped to be acknowledged somewhat for his piety. But it became clear that he had been described to the pope, in Italian, mostly with regard to his Hollywood career. Through a translator, His Holiness told Vincent, “Thank you for making the Gandhi film.” Vincent said he tried to communicate to the pontiff that Richard Attenborough was responsible for the film, but he was prompted to make way and move along.

Mohandas Gandhi (1869–1948) organized and inspired a widespread and sustained movement of nonviolent noncooperation that ended the British rule of India. Attenborough’s 1982 biographical film of the Mahatma’s life is exceptional for numerous reasons.

It seems unlikely that such a film—with a cast of hundreds of thousands, shot on locations around the world with the patronage and active cooperation of numerous governments, along with the invitation and consent of the vast ecumenical culture of adherents that Gandhi has influenced—could be made during the 21st century. The screenplay and casting were in flux for nearly two decades. (Early candidates for the role that Ben Kingsley ultimately owned in every way included Alec Guinness and John Hurt.)

It would not be unreasonable to say that Attenborough spent his entire career preparing for Gandhi. His British film peers David Lean and Michael Powell had, separately and unsuccessfully, pursued the notion of a Gandhi film. So had Otto Preminger. Attenborough had not yet directed a film in 1962, when he was contacted in secret by a Gandhi devotee and asked to consider leading the project.

Most historical assessments give the film high marks for accuracy. The scenes of military violence throughout are directed without stylization. Being ordered to club people or being clubbed are simply terrible and tedious, and to turn those moments into action scenes would have diminished them. Kingsley’s Gandhi is given the line, “Poverty is the greatest violence.” That violence is also portrayed with all of its offensive, life-crushing force.

Gandhi and his collaborators undid the British Empire mostly by being still, by praying and fasting. Kingsley—whose given name is actually Krishna Bhanji, and who descends from the same Indian ethnic group as Gandhi—inhabits the lead role with magnificent restraint. He makes it seem exquisitely believable that a slight man of some years, clad in homespun, could intimidate and humble military aristocrats and elicit from them fevered dispatches to parliament and the crown urging capitulation.

Gandhi is a fantastic film, of a sort all too rare. Possibly the strongest recommendation to see or revisit the film is the fact that, since its making, the British government, demonized in the film by accurate portrayal, eventually made both Kingsley and Attenborough knights of the empire. And many thousands of people—more than a few administering major awards and accolades—have compensated for the pope’s error and have celebrated Attenborough himself for making the Gandhi film.

On the eve of India’s Independence Day anniversary, Knox County Public Library will show this acclaimed biographical drama. Viren Lalka, organizer of the Knoxville group Namaste, Welcome to India, will introduce the film.