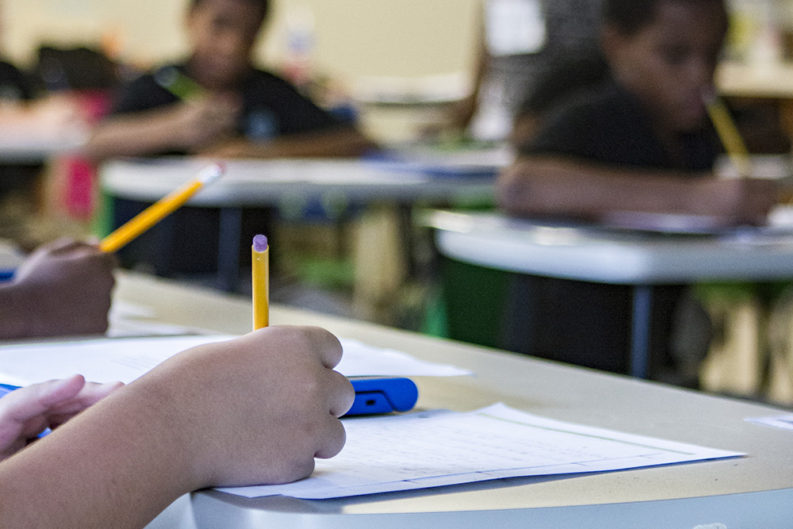 The Johnson family has a beef with Knox County Schools, one they say they’ve been trying to resolve for years but keeps cropping up because of an ingrained culture of discrimination and prejudice.

If those accusations hold true or not will be up to the federal Department of Education to decide. Sharlës Johnson and his wife, Rebekiah, have filed a complaint with the federal Office of Civil Rights against the school system—one of at least two pending against KCS.

“They [school administrators] have the nerve to tell the community about disparities and how they’re going to improve, but we’re a multicultural family who have dealt with them behind closed doors, and it’s time to open those doors,” says Sharlës Johnson, who is black. His wife Rebekiah is white, their six children mixed.

“We’re not used to having to deal with this mindset and culture so much,” he says. “We’ve experienced discriminations and they’ve have refused to address them, or they just try to wait the parent out.”

Sharlës Johnson says their issues with KCS date back more than five years, starting not long after the family relocated to West Knoxville from Illinois. But things came to a head in late 2015, prompting the family to file a civil rights complaint based on how their 8-year-old son was treated at Northshore Elementary.

The Johnsons’ issues are numerous and somewhat nuanced, spread out over several years, and they’re still developing as the family works through the federal investigative process. Their complaint alleges their son was discriminated against based on his race and age because he was questioned about where he lived by an elementary school cafeteria worker. Sharlës says the family at the time was maintaining two residences, a drawn-out move for personal reasons that allowed their children to attend different schools.

An October letter from KCS Director for Elementary Education Julie Thompson explained that since one address was not zoned to attend Northshore Elementary, the district sought clarification. KCS spokesperson Abbey Harris declined to comment for this article, citing the district’s policy of not commenting during “ongoing litigation.”

“Because a previous residence outside of the Northshore zone had been verified, it will be necessary for your new residence to be verified as well,” the letter reads. “It is important going forward that you follow Knox County Schools Board Policy BK Civility Code when interacting with students, faculty, and administrators at Northshore Elementary School.”

It may sound like a minor exchange, but the Johnsons say it’s just a piece in the larger context of a continuing confrontation with KCS. It’s the basis for the federal civil rights complaint, though the Johnsons have also since filed a retaliation complaint, alleging Sharlës Johnson was served with a “no trespass” letter by the school system in February of this year that, at least in part, was due to his race and filing a complaint against the school district. The OCR is also investigating these allegations.

Update: The Johnson family has another retaliation complaint filed against KCS related to truancy allegations when the family went out of town in February to deal with emergency family affairs. The truancy allegations from KCS have since been dropped.

In response to a records request from the Mercury, Knox County School spokesperson Melissa Tindell, who recently left her position with the district, said that since 2013 there have been more than 5,000 pages of emails between the Johnson family and top school system administrators, in addition to “numerous other documents”—these are not parent-to-teacher contacts, but exchanges between the family and district’s “executive team” and “leadership team,” which includes top-level administrators and school principals.

In all, Tindell estimated it would cost $500 and take several weeks to cull through the documents and redact any information that might not be releasable under state law. The Mercury filed a complaint with the Tennessee Open Record Council—a state agency tasked with reviewing Tennessee Open Record Act violations and helping state and local departments comply with the law—in an effort to elicit a timely response from the school system. (State law requires a response to record requests within seven business days. KCS finally responded to our request about 22 business days after it was filed with this rough estimate, a full calendar month.)

The Mercury has filed a Federal Freedom of Information Act request with the Department of Education for copies of the complaints and other documents, though it has not yet been fulfilled despite surpassing a 20-business-day deadline set by federal law. A spokesman for the department confirmed it was investigating the allegations.

KCS is currently under investigation for a separate civil rights complaint focused on the construction of a new Gibbs Middle School. The complaint, brought by the Knoxville branch of the NAACP, alleges that the new school would essentially resegregate a portion of the county along racial lines. That complaint was filed the same month as the Johnsons’.