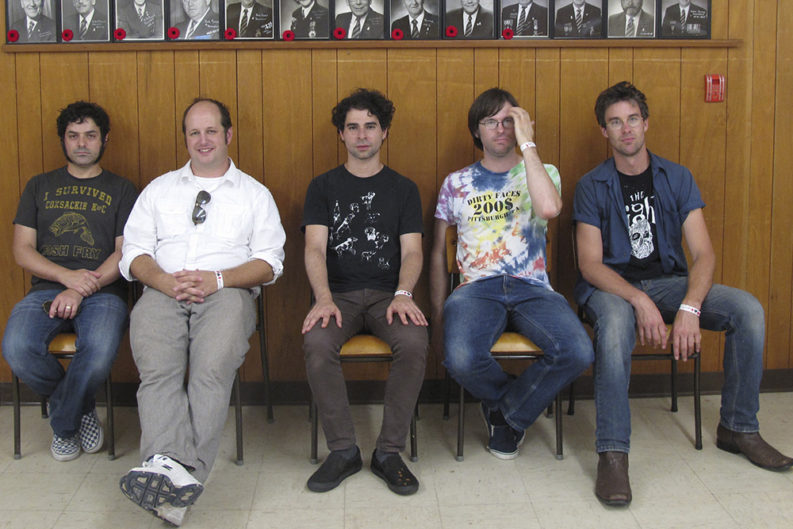 During several past Big Ears festivals, an “indigenous companion” event called Hello City was held at Pilot Light to showcase local and regional music. It didn’t happen this year, but Pilot Light’s Jason Boardman is keeping the concept going this weekend with the fourth installment of the festival, the first Hello City untethered from Big Ears.

Theoretically, Boardman says, several of these special events might occur every year in venues besides Pilot Light. This weekend, Boardman is bringing in one of his favorite bands, Oneida, for two nights of music that will also feature an eclectic collection of Knoxville acts, including Black Atticus, Headface and the Congenitals, Royal Bangs, and Shriek Operator, as well as Asheville’s Nest Egg. The festivities will be split between Pilot Light, on Friday night, and the Knoxville Museum of Art, on Saturday.

The Brooklyn-based rock band Oneida has been at it for two decades now. The group hasn’t been very active in the last few years—as with many bands who have kept it up this long, careers and families have gotten in the way of tours and recording sessions. But the members apparently have no plans to call it quits anytime soon; new studio and live albums are forthcoming. Original members Kid Millions, Bobby Matador, and Hanoi Jane are now joined by Barry London and Shahin Motia, aka Showtime, to continue the band’s always unpredictable brand of exploratory rock, drawing from psychedelia, krautrock, minimalism, drone, and, occasionally, pop music.

Oneida has a solid body of work represented on a dozen albums and numerous singles and EPs, but the group is perhaps at its best onstage. The band has performed seven memorable shows at Pilot Light. Like the Australian improv trio the Necks, Oneida has developed an unlikely rapport with Knoxville; the members have cited it as one of their favorite cities to play, and have named Pilot Light as one of their favorite venues.

“I remember when we first played there in 2001,” says drummer Kid Millions, otherwise known as John Colpitts. “We’re so used to an indifferent crowd—it can be hard to connect with people on the road with what we do, but it seemed to click immediately with Jason and the Pilot Light. I’d heard about it as a good place to play, and we tried it out, and it’s been a nice home away from home for us for many years.”

Colpitts, who has worked with Laurie Anderson and Spiritualized, liked Knoxville so much that he asked Boardman’s band, White Gregg, to back him on a leg of his Man Forever tour, a project in which the drummer invited local bands to accompany him on a percussion piece.

“I had this plan to play with different musicians in each town,” Colpitts says. “I thought anybody can pick this piece up and do it well, but once I played with them, I thought, ‘Wow, they really got inside it,’ and asked them to play several shows with me. We recorded, at Pilot Light, what I consider the definitive version of the piece and released it as a tape. My girlfriend is not always super into the crazy avant stuff I do, but she really connected with that recording and finds it very moving.”

Colpitts is hesitant to give too much away about the upcoming performances—in fact, he and his bandmates were still planning the show last week. Friday night’s show at Pilot Light will likely be a more traditional rock show, but the special setting on Saturday, in KMA’s outdoor garden, might inspire a long-form experimental approach.

I ask Colpitts if Oneida still performs the 2002 minimalist rock burner “Sheets of Easter,” a driving, repetitive piece that can stretch to almost half in hour in concert. “Of course,” he jokes. “We can’t let the fans down.”

He explains the piece’s continuing popularity among fans.

“Doing a Reich or Glass-style piece with a punk element seemed inevitable, but no one had really done it like that before,” he says. “Really, it’s such a simple piece, and people really respond to it. We realize we barely register with most people, but there is a small, stalwart group of people in the country who seem to really be into that piece and into what we do. And that’s all right.”

Hello City, featuring Oneida, Nest Egg, Black Atticus, Headface and the Congenitals, Royal Bangs, Shriek Operator, and more, will be held at Pilot Light on Friday, Aug. 12, at 8 p.m. and at Knoxville Museum of Art on Saturday, Aug. 13, at 7 p.m. Friday’s show is 18 and up; Saturday’s event is all ages. Admission is $8.