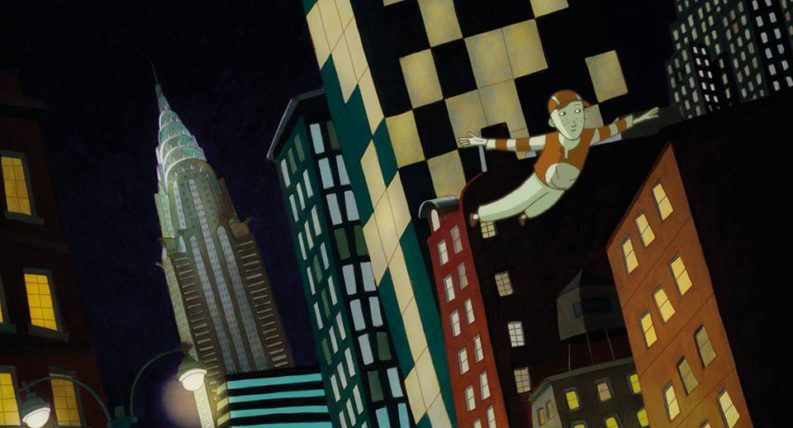 In the realm of theatrically released animated features, New York-based distributor GKIDS has defined itself as something of an anti-Pixar. Its slate, culled from across the globe but generally focused on European and Asian releases, tends to favor modestly budgeted and often hand-drawn animated movies that don’t elicit the geysers of tears and snot that erupt in the wake of, say, Inside Out. I enjoy technical wizardry and emotional devastation as much as the next Pixar devotee, but there’s something to be said for the pleasures of old-fashioned animation and not being a weepy basket case when I leave a movie theater.

Anyway, besides being the stateside portal for Studio Ghibli’s films, GKIDS has curated such an impressive lineup of art-house animation that virtually anything under its banner is a must-see. Their latest release, the French import Phantom Boy, qualifies as one of the lesser entries in the label’s catalog, but it’s not without its virtues, including vibrant animation and frequently funny, kid-centric takes on film noir and crime-movie tropes.

The story centers on Leo (the voice of Marcus D’Angelo in the English-dubbed version that’s screening locally), an 11-year-old boy who’s confined to a hospital while undergoing cancer treatment. For reasons that are never explained, his illness has a strange side effect: He can leave his body and flit about the city, unseen and unheard, as long as he doesn’t stay out of his body too long. Leo, who wants to be a policeman when he grows up, uses his ability to perform small acts of kindness whenever he can. He’s a really nice kid and a likeable hero.

When he meets up with Alex (Jared Padalecki), a fellow patient who also happens to be a police detective, Leo is pressed into service to help the wheelchair-bound cop take down a criminal mastermind known as the Face (a blustery Vincent D’Onofrio). Mostly this involves serving as Alex’s eyes and ears as Leo drifts through a stylized Gotham nightscape of creepy parking garages and bad-guy hideouts, often tailing a fearless investigative reporter named Mary (Melissa Disney, in a role voiced by Audrey Tautou in the French version), who’s determined to be Alex’s girl Friday.

Dropping a sixth-grader into a crime caper is a cheekily amusing concept, and filmmakers Jean-Loup Felicioli and Alain Gagnol have fun sending their young hero into classic film noir settings. (Alex insists that Leo keep his eyes closed while following a criminal through a strip club.) Leo’s ghostly excursions into a Dick Tracy-ish underworld are the highlights of the film, rendered so beautifully that they occasionally achieve a kind of visual poetry. The lo-fi animation, which is only sparingly tweaked by CG enhancements, won’t appeal to all viewers, but if the blocky design and impressionist style suits you, Phantom Boy is always a pleasure to look at.

If only the script measured up to the style. It’s possible that Phantom Boy is at least partly undone by high expectations—the last collaboration between co-directors Gagnol and Felicioli was the terrific crime caper A Cat in Paris, which scored an Academy Award nomination for Best Animated Feature in 2012. Cat generated real tension, though, which Phantom Boy never manages. Even though Leo’s illness puts him up against a threat that’s far scarier than the crooks who pursued Cat’s heroine, Phantom Boy’s heavies are such inept boobs that they undermine any sense of suspense or danger. Its story is also clumsier, revolving around a poorly defined plot to destroy New York City with a computer virus and never bothering to flesh out or adhere to its own internal logic.

But maybe that’s all as it’s meant to be, since there’s some ambiguity as to whether Leo’s adventures are real or imagined. And while Phantom Boy is neither as riveting nor as thrilling as Cat, it’s got the same sense of humanism and compassion at its core, and it’s classy enough that it never exploits Leo’s sickness to manipulate its audience; it doesn’t shy away from the possibility that Leo might not survive his illness, but the underlying tone skews toward lightheartedness and whimsy. Adults may find their attention wandering early and often, but kids who are keen on old-school animation and fizzy adventure might find a lot to like.