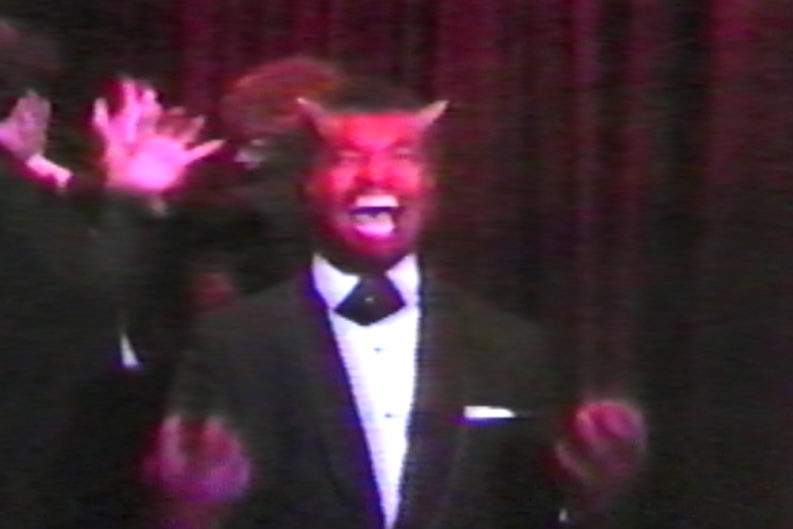 You may have read recently that Funai Electric, the only company still manufacturing VCRs, will soon stop production of the machines. The fact that they were still being made might have surprised you. It certainly surprised me to find out that Funai sold 750,000 of the units last year. After all, VHS tapes are a nigh obsolete format, collected and watched primarily by movie buffs nostalgic for their 1980s and ’90s heyday.

We should be grateful that anyone cares enough to collect them, because some of these movies were straight-to-video releases that might not ever receive the Blu-ray or streaming treatment. A lot of these tapes are low-budget genre films that, to be honest, most people probably wouldn’t sit through, but they’re a record of our culture worth preserving. These collectors are serving as citizen archivists.

If you doubt that, consider Pieces of Darkness, a 1989 horror anthology filmed on videotape in Knoxville and released by the California company Legacy Home Video. The copy donated to the Tennessee Archive of Moving Image and Sound is a former rental from Movie Gallery in Bearden; the thin paper box is cut at the top and side to fit into a sturdier plastic case, and the tape itself bears a “Be Kind Please Rewind” sticker.

It looks as though it saw quite a few viewings over the years, probably by teenagers drawn in by the tagline: “A macabre medley of sci fi terror. Don’t miss it—if you dare.” The first short, “The Bootmaker,” is a convoluted tale of a Vietnam veteran caught up in “a wicked web strung with adultery, deceit and mutilation.” “Choice Cuts” is the tale of a pair of bickering butcher brothers and a winsome young lady customer. In “That’s Showbiz,” a young thespian cuts a deal with the devil, with the inevitable gruesome results.

Pieces of Darkness “That’s Showbiz” from TAMIS on Vimeo.

If this doesn’t sound like your thing, the VHS tape may still be of interest for the glimpses of Knoxville it offers. I’m not sure what part of Knoxville is being passed off as the jungles of Vietnam in the first segment—there are plenty of lush wooded areas around that might fill that role. Most of “Choice Cuts” takes place in and around what looks like Chicken City on North Central Street. The final film reveals the most, with multiple downtown locations, including Market Square and a few now-defunct diners and restaurants.

I don’t think there is a shortage of photographs or moving images of any of these places, but the film does offer unique views of how they looked around 30 years ago. Just as there is a current interest in downtown’s past—the city and Visit Knoxville recently paid good money to camouflage a blank parking garage exterior with giant photographs of downtown Knoxville in less parking garage-ridden times—it’s likely that, a few decades from now, some folks might be interested in what Knoxville looked like in the 1980s. Plus, it’s kind of fun to see a local stab at the horror genre from that era. (A few copies of Pieces of Darkness are available on Amazon for around $10.)

TAMIS is also fortunate to have several one-of-a-kind VHS tapes that are important documents of Knoxville’s culture. Anna Mae Denton was a local lay pastor known for her decades of work assisting and feeding low-income families and the homeless. (Oddly, she’s mentioned in a 1994 book on Bill Clinton’s 1992 presidential campaign.) Denton founded Ministry as Word Faith church, which for a while broadcast out of the old WNOX auditorium on Whittle Springs Road. We have a couple of VHS tapes of Denton preaching there in 2003, a few years before she died. Denton appeared on television on and off for about 20 years, but so far this is the only footage we have of her.

After reading about the impending demise of VCRs, Ed White thought it might be time to find a secure long-term location for a few of his tapes. One is a document of the 1992 Knoxville Pride rally, which starts off in Market Square and heads up Gay Street, ending with a series of speeches and testimonials in front of the City County Building. White says that there had been gay pride rallies in Knoxville in the 1970s and ’80s but 1991 was when an annual Pride Week with accompanying parade was launched, so this captures the moment early on.

The parade is longer than you might have guessed for Knoxville in 1992, though there aren’t nearly as many people lining the streets for it as there are now. It was also the first year an official proclamation from local government was issued for Pride Day—and the last one for many years. Credited to Knox County Executive Director Dwight Kessel, it was read at the rally: “In the true fashion of America, people of diverse views can air their views and pursue their beliefs.” Though petitioned, Knoxville Mayor Victor Ashe declined to issue a proclamation.

Inside the Vault searches the TAMIS archives for nuggets of lost Knoxville music and film history.