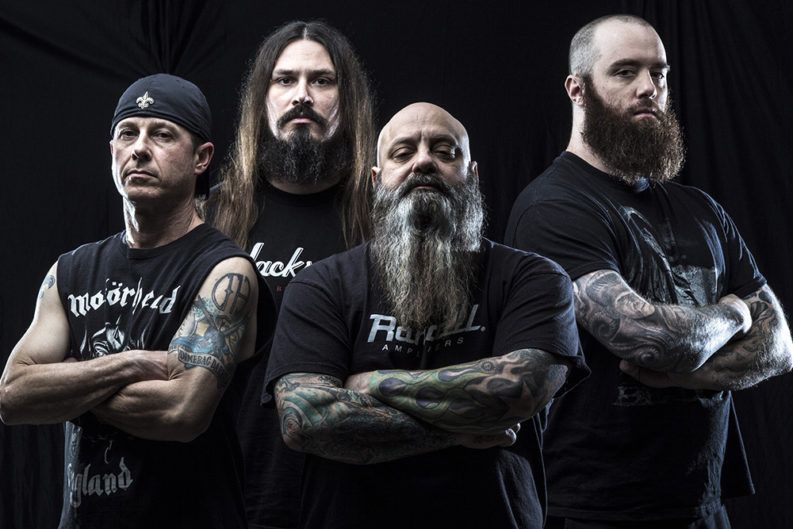 Twenty-seven years is a long time to endure the grind of being in a touring rock outfit, and never mind the grind of playing the type of deafening, bottom-heavy metal music plied by Kirk Windstein’s Crowbar. Yet Windstein—the band’s singer/guitarist and, prior to the recent return of bassist Todd Strange, its only remaining original member—has persevered, staying the course even as like-minded but better-known bands have fallen by the wayside.

“There have been a lot of ups and downs, a few times when I was literally the only guy in the band,” says Windstein, speaking from the road during Crowbar’s current jag with British death-metal quartet Carcass. “But the thought of stopping has never crossed my mind. Quitting was never an option.”

Founded in 1989 by Windstein and fellow New Orleans residents Jimmy Bower (drums) and the now-deceased Mike Hatch (guitar), Crowbar was one of a handful of groups that popularized so-called sludge, a snarling and ferocious brand of heavy metal played on detuned, slack-stringed guitars.

For better and worse, bands like Crowbar, Pantera, and Eyehategod cleared a path for whole new generations of ultra-heavy rockers, from the nu metal mavens of the middle and late 1990s to 21st-century sludge success stories such as Mastodon and Kylesa.

“We had our influences, too,” says Windstein, in a crusty drawl that sounds a good deal like his guitar tone. “We took after guys like Carnivore and the Melvins, even Trouble. But for the most part, there were very few bands doing that low-end thing when we started doing it.

“It’s a great feeling, having influenced so many other bands. There were lots of times when bands younger than us got a lot more popular than we were. It was kind of ironic. ‘We influenced them, but we’re opening for them.’”

Windstein’s native New Orleans has been a locus of sorts for the Southern brand of sludge. It’s home to Eyehategod founder Bower, Pantera and Down vocalist Phil Anselmo, and earlier Crescent City sludge icons like Graveyard Rodeo and Soilent Green.

Windstein describes the metal scene in New Orleans as close-knit, almost to the point of being hermetic.

“We’ve all known each other, jammed with each other, and been in each others’ bands for so long,” he says. “It’s just been this certain group of guys who have always hung out and played together, and we still do it today. And we always worked together, trying to build something. I’m not sure what it is about New Orleans that’s made our scene work—maybe it’s the food.”

Though Crowbar has never exactly been a household name—a couple of infamous ’90s-era Beavis and Butt-Head spotlights notwithstanding—and though he’s often had to watch some of the lesser tag-along outfits reach heights of arena-rock glory in his wake, Windstein says he’s happy with the way the band has endured, and steadily flourished, through 10 albums and nearly three decades.

“I’ve been blessed to watch so many genres and god knows how many bands come and go,” he says. “It’s tough out there. We’ve just continued to build—gradually.

“When I think of how I want my career to be, I like to think of Lemmy Kilmister and Motörhead. Motörhead was never huge. But when Lemmy passed away, Motörhead was bigger than they had ever been. If you continue to kick ass and treat your fans with respect, your fans will stay with you.”