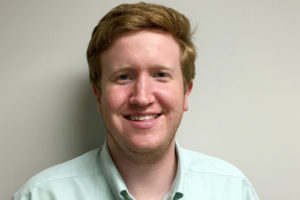 We’re in the process of expanding our sales team, and we’ve made our first hire: Michael Tremoulis.

Michael comes to us from Home Tour of N.C., a real estate publication. Before that, he was a social media assistant at Ripley PR in Maryville, an assistant account executive at Paper Systems in Knoxville, and an advertising intern at Moxley Carmichael. He graduated from the University of Tennessee in 2015 with a degree in public relations—so he’s a relative youngster!

What’s he doing here with us? Find out!

Why were you drawn to sales as a career?
I majored in public relations, and I’ve always enjoyed to write—but I went down the sales route because persistence has always been my strongest attribute. Growing up, I was pretty good at persuading my friends to trade baseball cards to me even if they were hesitant, so now persuading businesses to invest in advertising isn’t much different. My father is a salesman and his father was a salesmen, so it runs in my genes.

Why did you apply for the position here—you do know that the Mercury is a print publication, right?
I was a fan of the Metro Pulse growing up in Knoxville, and when I heard that it was going to continue under a new name, I was very happy. I applied because I believe the paper’s values align with mine. I believe pursuing the truth is so important, and the Mercury does that. Knoxville needs another voice in print, and the Mercury appealed to me for that reason.

What will you bring to the paper?
It’s been nearly over a year since I graduated from The University of Tennessee. I know I’m relatively young, but I have lived in the Knoxville area my entire life, and I know I can bring fresh ideas to the table that would help students and younger professionals in the city pickup and read the paper.

If you’d like to apply for a sales position here at the Mercury, go to our Careers page.