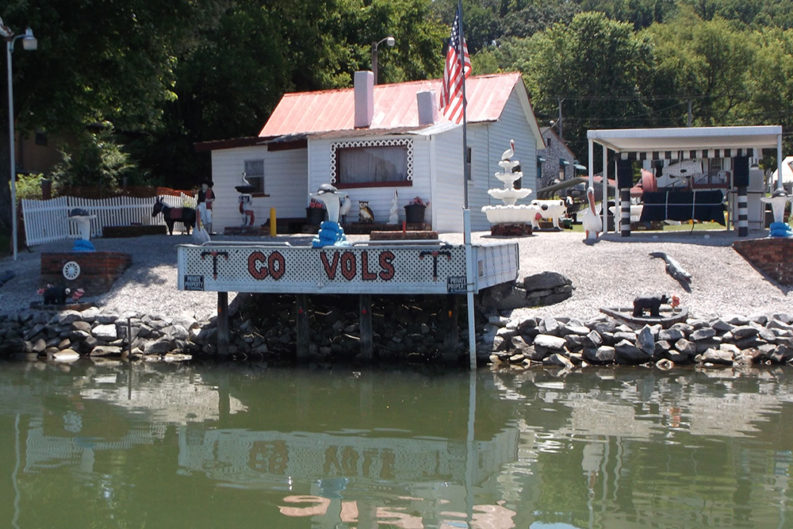 Jake Hudson knows he has the best job in town. He once owned a bar on the Strip, where he was shot three times on one occasion. After that he worked for some years in construction, having been involved with the building of UT Hospital, the Kuwahee Wastewater Treatment Plant, and other iconic structures around town. Then he was with city engineering for 20 years, accomplishing among other things the first mapping of Knoxville’s storm sewer system. But Jake’s not quite ready to retire, and for the past 10 years he’s been our eyes on Fort Loudoun Lake. He let me tag along one gorgeous June morning.

The Fort Loudoun Lake Association was created about a decade ago to improve conditions on the stretch of the Tennessee River that flows through downtown, past the UT campus, and along Sequoyah Hills. That’s a small section of the 50 miles of waterway from Forks of the River to Fort Loudoun Dam, but it’s a high-visibility, highly-valued piece of water. Laws and regulations have curbed most of our intentional use of rivers as sewers, but stuff still makes its way to the lake, much of it carried by stormwater flushing trash out of ditches. So Jake was hired by Fort Loudoun Lake Association to get in a boat and look for whatever might threaten public health and safety, not to mention the aesthetics of the river.

Jake and his AmeriCorp helper for the day, introduced to me as “AJ,” pick me up at Calhoun’s and we head upriver. Jake explains that donations from riverside landowners paid his salary for the first several years. Since 2014 he’s been employed by Ijams Nature Center, which receives money from Knoxville city government for that purpose. The boat he uses also comes from the city. His beat is from Forks of the River to the downstream end of Sequoyah Park. 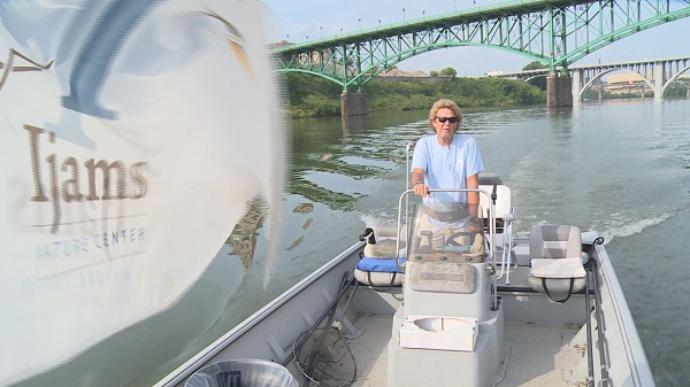 As we talk, the men are constantly scanning the water’s surface for things that shouldn’t be there. Jake steers the boat alongside the errant plastic bottle, lawn chair, cooler lid, or chunk of Styrofoam while AJ scoops it up with a long-handled net and drops it into either the trash can or the recycling bin. They joke about Weigels cups and Mountain Dew containers being especially well-represented among the floating debris.

TVA has special trash dams to keep debris from entering the hydroelectric turbines, but the collected trash is simply released downstream of the dam. A lot of trash makes its way to the river from the 9,000 square miles of watershed that begins near Roanoke, Va. and Asheville, N.C. Some of that trash collects behind floating booms at the mouths of First, Second, and Third creeks, and removing it is one of the least enjoyable parts of the job.

Those tributaries can also be conduits for spills and illegal discharges that can cause fish kills in the river’s main channel. Fortunately, local fish kills are rather rare these days. The last notable one was right after the fire that finished off the McClung Warehouses in 2014. Runoff from fighting the fire got into Second Creek at the Foundry and killed about a thousand shad.

Barely submerged trees, or parts of trees, pose a particular hazard to boaters and skiers, so Jake is always on the lookout to haul those to shore. He’s also had to haul a few dead cattle. Dead people are an infrequent find that prompts a 911 call. Abandoned watercraft might also become a navigation hazard, and this day we investigate a report of a boat-like thing lingering near Dickinson Island. It turns out to be a jet-ski platform that’s been tied to a tree. They decide to leave it there a few more days in hopes the owner will retrieve it.

As we make our way downriver past Third Creek, Jake talks about a man he often sees fishing there, and often catching a lot of fish. That’s been a popular angling spot for a long time, but it seems to get more popular as water quality improves. And according to our eyes on the lake, water quality has noticeably improved in the past decade. That has also meant more people recreating on the lake. Along with ski boats and other motorized craft, paddlers are an increasingly common sight. Jake swears he once saw a woman doing yoga poses, even head stands, on a paddle board in the middle of the river.

We pass beneath the Alcoa Highway bridge and I learn who lives in each of the grand houses on the north shore bluff. For someone who has been away from Knoxville for most of the past seven years, the sight of all that new “student housing” looming on the south shore is a bit disconcerting. Then there’s some comic relief when we linger briefly in front of a tiny house that’s a monument to kitsch, with UT logos alongside statues of Florida wildlife.

As we complete the loop, Jake comments on the decades-long “experiment” that is the TVA reservoir system. TVA manages the system for flood control, among other things, by dropping water levels in winter and raising them in summer. That’s the opposite of what nature does in “normal” waterways. We wonder aloud what the ecological effects are, and whether TVA is studying that.

TDEC and other agencies periodically report on progress toward the Clean Water Act’s goal of fishable, swimmable waters. But the more compelling evidence is the actual swimming and fishing of those waters, and locally we see progress.