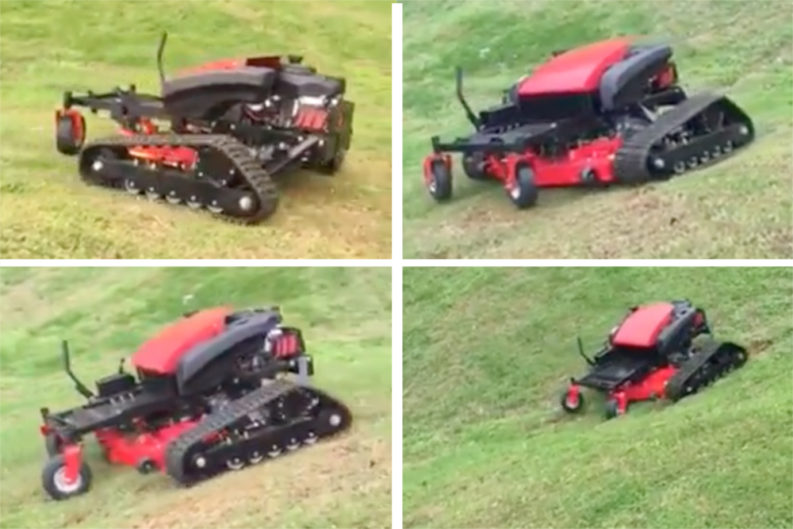 Behold! The city’s newest weapon in its ongoing fight against grass: the TRX-44. This mammoth of a mower has a mind of its own–almost quite literally, though it’s controlled by a person with a joystick–and a price tag higher than the federal poverty level for a family of three.

In a press release Thursday, city officials said the $22,500 lawnmower was a good investment for trimming the hilly hillscapes of Knoxville since it will help keep human workers out of harm’s way. The blade-wielding robot will be used to cut steep slopes in places like Cal Johnson Park, officials say, where “incidents [a.k.a. accidents] have occurred” in the past.

“As we all know, Knoxville has plenty of steep hills, which has made it challenging for our crews to mow under safe conditions,” Public Service Director Chad Weth said in a statement. “Having a mower that can address hazardous hills keeps our crews out of harm’s way–a great benefit to our employees, their families, the department and the City in general.”

The futuristic mower purchase comes the same week that Knoxville was ranked as one of the worst-run cities in the country by California-based finance company WalletHub. The analysis compared 150 of America’s largest cities in terms of “overall city services” and “total budget per capita.” Knoxville performed poorly in both measures, ranking 116 in services and 130 in per-capita city expenditures. (We still did better than Atlanta, Memphis, and Chattanooga, if that counts for anything.)

Watch the TRX-44 in action:

Updated: After publishing this blog post yesterday, city of Knoxville communication guru Jesse Mayshark sent us this email about the “HubWallet clickbait” that ranked the city’s performance:

“It’s hard to respond to such a random ranking. Most of the things they’re measuring don’t have anything to do with how ‘well run’ a city is, and it’s not clear whether they are differentiating between cities and larger Metropolitan Statistical Areas. This is why we don’t pay much attention to click-bait listicles, regardless of whether Knoxville ranks high or low.

“We can say that in terms of city of Knoxville operations, we currently have our highest-ever bond rating; we have added significant new city services over the past 15 years (the 311 information line, curbside recycling pickup, new parks and playgrounds), without growing the size of the city workforce; our police department’s crime clearance rate last year was 48 percent, well over the state average of 38 percent; we have expanded our public transit service along major routes, serving more people than ever before; and two successive administrations have overseen a major revitalization of a previously moribund downtown.

“We would be happy for the folks from Wallethub to come visit any time.”