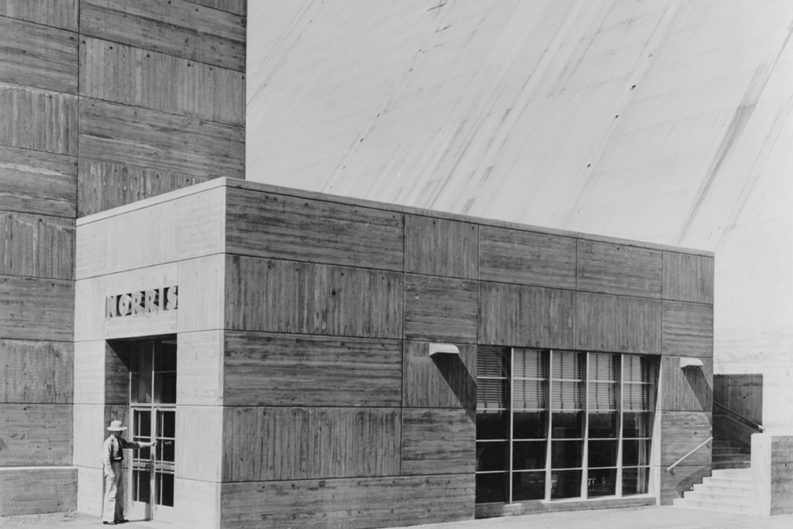 Norris Dam, on the Clinch River, straddles the borders of Anderson and Campbell Counties, about 30 miles from Knoxville, but it’s a major reason that the Tennessee Valley Authority established its headquarters here.

Norris was TVA’s first big new project. Along with the planned town of Norris, built by TVA as an ideal community for dam workers, the Norris complex became a showplace for TVA’s accomplishments and promise. TVA found it useful to establish its headquarters in Knoxville, a city with office space and hotels within an easy drive of Norris. Several TVA leaders moved to the town of Norris, including some of its early directors, and commuted to Knoxville.

Its namesake was not a Knoxvillian or even a Tennessean, but a hardworking, idealistic politician who represented Nebraska. Sen. George W. Norris (1861-1944) was a Progressive Republican and a broad-minded fellow who worried about the Tennessee Valley even though it was hundreds of miles from his constituency. (Norris Dam, in fact, is about 1,100 miles form Norris’s home.)

For years before Franklin Roosevelt’s New Deal, Norris had argued persuasively about the importance of government control of the flood-prone Tennessee River. As TVA developed, Norris advocated a chain of TVAs across the country to provide public control of America’s rivers, for hydroelectric power and flood prevention.

Much of the planning for Norris Dam was done in downtown Knoxville, especially in TVA’s headquarters buildings, like the New Sprankle (now known as the Pembroke) on Union Avenue. Norris Dam was considered very modern in style. Its lead designer was young Hungarian-born architect Roland Wank (1898-1970), who lived in Knoxville for several years, in the relatively new community of Sequoyah Hills, before moving to the town of Norris, which Wank helped design.

Once when Sen. Norris was with President Franklin Roosevelt visiting TVA facilities at Muscle Shoals, he telephoned the office of the Norris Dam project. “Norris here,” answered a TVA official. “No, Norris here!” responded Norris.

In September 1935, the 74-year-old senator expected to get off the train at Knoxville’s Southern Railway station for a quiet automobile tour of Norris Dam. He was surprised on Depot Street by Mayor John T. O’Connor and a huge crowd, including a committee of 150 civic leaders and local celebrities, including all three TVA directors, former and future mayors, and university and business leaders. It was a greeting, a reporter remarked, usually reserved for a popular presidential candidate.

Norris responded to the surprise with grace and an unprepared speech. “The TVA program calls for a navigable channel all the way from Knoxville to the Gulf of Mexico,” he said. “You’ll have almost the advantages of an ocean port. This means cheap transportation, and this coupled with cheap electric power should produce wonders for your people.”

Then David Lilienthal, the youngest of TVA’s three directors, drove him to the brand-new town of Norris, Tenn., where workers were almost finished with TVA’s first dam. He toured Norris Lake via boat, and spent a week here, giving talks at a dinner at the Andrew Johnson Hotel and a large public meeting at the University of Tennessee.

Norris Dam became a prototype for several other dams that would be built in the decade after the Norris project, for both hydroelectric power and flood control. Among them are Cherokee Dam (1941) on the Holston, Watts Bar Dam (1942) on the Tennessee, Douglas Dam (1943) on the French Broad, Fort Loudoun Dam (1943) on the Tennessee, and Fontana Dam (1944) on the Little Tennessee. The federal energy available from TVA’s cluster of hydroelectric dams in the Knoxville area was a major reason Oak Ridge was chosen as the location of part of the Manhattan Project, and later Oak Ridge National Laboratory.

Norris Dam will celebrate its 80th birthday on site on July 29 and 30 with what TVA promises will be a “big dam party.” For more, see tva.gov.

Featured photo: Completed in July, 1936, Norris Dam was often compared to modernist art. Photographs of it appeared at New York’s Museum of Modern Art, and even the hyper-modernist Swiss architect Le Corbusier visited the dam, and found it inspiring. This early photo, in which you can read the word NORRIS in stylish lettering, shows the corner of the dam and its powerhouse, with the original visitors’ entrance. Photo courtesy of Tennessee Valley Authority.