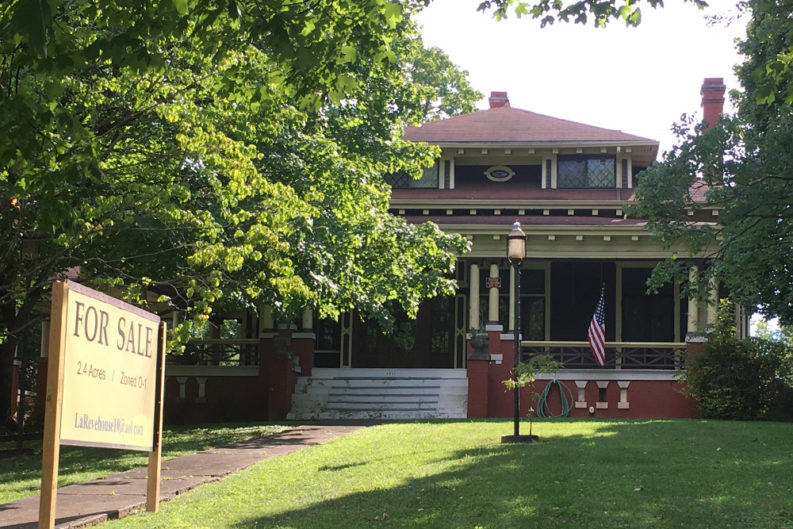 An estate controlling a historic Craftsman home on North Broadway has sent a letter notifying Knoxville City Council and Mayor Madeline Rogero of its plans to seek commercial zoning for the property.

If approved by the Metropolitan Planning Commission and Council, the change would likely pave the way for demolition of the house built in 1910 and owned by former city councilman Paul Howard until his death in 2014.

During the past 18 months, the Howard House has become a lightening rod for the tension between private property rights and historic preservation. It has also been a driver in conversations about what businesses and neighborhoods in the North Broadway corridor want future development to look like.

Howard’s will requires his three sons to sell the house and divide the profits. A development company that builds Walmart Neighborhood Markets offered the family $1.27 million for the property last year, before backing away from the deal in September in the face of public opposition.

When the Walmart deal was still imminent, heir Tim Howard approached Knox Heritage for help finding an alternate buyer who would preserve the house instead of demolishing it for a parking lot. Knox Heritage launched an online crowdfunding effort to buy the house (as well as an online petition asking Walmart not to demolish it). The fundraising effort raised only about $8,000, an amount executor Nick Howard calls in his letter “a pathetic preservation effort” met by “an overwhelming wave of apathy.”

The letter reproaches Knox Heritage for fighting the lucrative commercial purchase offer and then failing to buy the house, saying the nonprofit’s “interference… has resulted in devastating financial loss to the heirs.”

“I doubt a single member of (City Council or the MPC) would want an outside entity dictating the disposition of your private property as Knox Heritage has done to the Howard family,” he writes.

Nick Howard’s letter states that probate court is requiring the estate to be closed by Nov. 2. He states, “I am bound by law, ethics, and Paul Howard’s last wishes, to administer the estate to the maximum financial benefit of the heirs.” He says the family is “discounting” the selling price to $995,000 (or less, to a buyer who will move the house).

Because the house is surrounded by property zoned commercial, Howard says he will be making a formal request for the same zoning. MPC officials say they have not yet received such a request.

Kim Trent, director of Knox Heritage, says the organization has tried to help the family sell to a buyer interested in using the house for an office, its current zoning. “You don’t have a god-given right to sell something for the maximum price at the highest intensity of zoning,” she says.

And Knox Heritage is not alone in its opposition to the zoning change.

Trent acknowledged disappointment that Knox Heritage was unable to raise enough money to purchase the house itself, but she says she has driven potential buyers to the Howard House as recently as the last few weeks.

“We have been approaching potential buyers about purchasing that property, but Mr. [Nick] Howard has been so hostile that when we asked a Realtor to contact him, he would not even tell us a price,” she says, saying the letter is the first she learned of the cost. She says the family, which has not hired a professional Realtor, will show the house only to qualified buyers, but with no price it’s been impossible to tell who is qualified.

She added, “I don’t know how effective it is to sell a piece of office property on a main thoroughfare without having a Realtor involved to help you navigate that.”

Trent and others say the asking price seems to be based on the big-box offer, which was dependent on commercial rezoning. The house is appraised by the Knox County Assessor at $392,800 and Zillow’s market estimate is $341,764.

“They can sell it for a more realistic price that would match the zoning as office space. Obviously, they want to get as much as they can for it,” says City Council member Mark Campen of Fountain City. “I think there’s a bigger issue for the long-term health of the Broadway corridor.”

Thomas says changing the zoning to commercial would contradict the intent of the Broadway Corridor Task Force, on which he serves. The task force is working on a Broadway Corridor Enhancement Plan intended to guide the type of development desired by existing businesses and neighbors. Its voluntary guidelines are intended to encourage redevelopment of vacant commercial property and increase the walkability and attractiveness of the corridor for shoppers and neighbors, says Lauren Rider, co-chair of the task force and resident of Old North Knoxville.

The plan is close to completion but has not been made public. Rider says it suggests some approaches that might require changes to current zoning requirements (which MPC is already in the process of reviewing) that traditionally favored cars by requiring expansive parking and setbacks.

“What the community doesn’t want to see is buildings bulldozed to make parking lots,” Rider says. “Demolishing that house and building a strip mall at the back of the property with a giant parking lot in front of it flies in front of the face of many things the city is looking at.”

Rider and Thomas also say that the corridor plan envisions mixed use, rather than all commercial development on Broadway. Rider says the task force is hoping the Bearden mixed-use approach currently underway may offer a template Broadway could eventually follow.

Thomas says the Howard House provides an anchor for a neighborhood feel of that portion of North Broadway. “If that slips over to commercial, it’s going to change the entire ambiance of that strip there, and essentially we’re looking at it just like an interstate exit.”

Speaking for herself, Rider adds, “It’s really a shame to lose what little is left when it could be used in fantastic ways: A B&B with restaurant, or offices.” She notes that Old North Knoxville donated $1,000 toward Knox Heritage’s fund drive to save the Howard House.

“I would love to see them commit to (a historic zoning) overlay to that property because of the commitment their father had to that house, and commitment he had to this community and to Knoxville. I don’t think that necessarily you can’t do one and do the other.”

In the end, even if MPC agreed to the zoning change, City Council will have the final say.

“I would very much like to see the home preserved and used as an office,” says City Council member Finbarr Saunders, who was a longtime member of the Knoxville Historic Zoning Commission and a former president of Knox Heritage. “I don’t know that typically we rezone just because somebody wants to increase the value.”

But Council member Nick Della Volpe, who represents that stretch of Broadway, says he’s open to the family’s arguments. The Howards were patient in giving Knox Heritage time to raise money to buy the home, he says.

“It’s hard to say it’s not a rational request. Everybody likes the house, but the reality is, if it’s your property you probably ought to be able to do whatever the hell you want with it,” Della Volpe says. “We can’t make everybody’s property a park. If they did it to your house, you’d be screaming. I would be.”

He adds, “Just to say, ‘I wish we could preserve it’—I think that’s naive.”