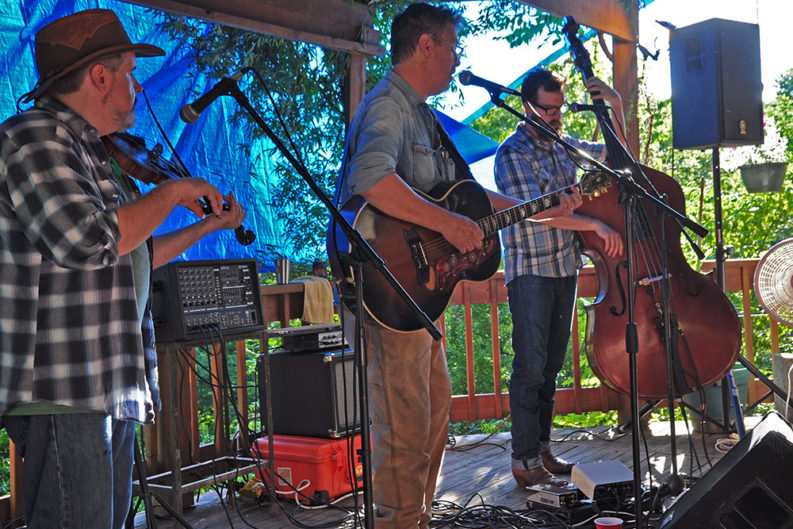 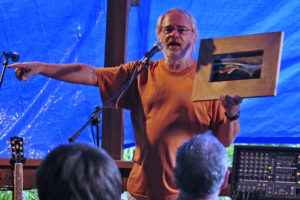 Steve Scarborough showed me the exact spot on his property where I could take a step from the Tennessee Valley onto the Cumberland Plateau. On one side of us was a slanting upthrust of sandstone, and below us, on the other side, lay Whites Creek, where the sun glittered off the riffles and illuminated the rock solid bottom of long pools ideal for swimming, fishing, paddling or lounging on a hot July afternoon. People were gathered at Scarborough’s place beside a pool called the Blue Hole to support a nonprofit organization—Conservation Fisheries, Incorporated (CFI)—at the eighth annual Whites Creek Palooza.

Causes, local or global, often seem abstract, couched in mission statements and strategic plans that seem remote from our experience. But on this day, at Whites Creek, a tributary of the Tennessee River (Watts Bar Lake), supporters of CFI could put on a snorkeling mask and see the aquatic diversity that makes the clean, clear waters of Tennessee Valley streams “the hotbed of temperate aquatic diversity,” as J.R. Shute, one of the co-directors of CFI, describes it. What you can see here is so “stunning,” says Scarborough, “that it makes aquarium stores look dull.”

Shute and Pat Rakes, the founders and co-directors of CFI, would like to keep it that way, and they’ve dedicated the last 30-odd years to this work. As graduate students at UT, Shute and Rakes began helping Shute’s wife Peggy (also a grad student) in her research on Citico Creek in Monroe County, where they snorkeled at night to collect and monitor yellowfin madtom, a species of catfish 2 or 3 inches long.

Starting in 1986, Shute and Rakes began to reintroduce the smoky and yellowfin madtoms and the Citico darter into Abrams Creek, where they had been eliminated in the 1950s as part of a trout reclamation project. This reintroduction project involved harvesting nests from Citico Creek and rearing the fish in hatcheries until they were juveniles, when they were released. After more than five years of trial and error of stocking and monitoring Abrams Creek, in the Smokies, Rakes finally spotted a yellowfin madtom that had been spawned in the creek and got so excited he called Shute, who was on vacation at the beach. 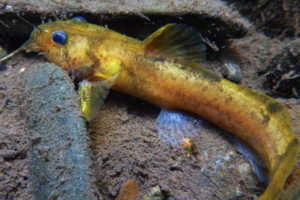 Rakes and Shute and their staff have done groundbreaking work at their hatchery, located on Division Street in Knoxville. As the CFI website states, “we have developed techniques to propagate more than 65 nongame fish, including some of the most imperiled species in the southeastern United States. We were the first facility in the Southeast to propagate rare, non-game fishes for recovery work.”

Regardless of these achievements, one might wonder why the average person should care about these tiny fish that most wouldn’t even be aware of if it weren’t for researchers like Rakes and Shute.

“Water is going to become more and more important with population growth and increasing drought as a result of climate change,” says Shute. “When we lose sensitive species like the darters, it brings into question the health of the entire ecosystem and may end up affecting sport fishing and eventually drinking water.”

Rakes likens darters and the other species CFI researches to “canaries in the coal mine,” the mine being our streams.

Shute says that siltation from farming/construction, pollution and runoff from coal mining are some of the threats faced by the fish his organization monitors and propagates.

The pool was a perfect temperature—cool but not shocking cold like some mountain streams. At first, looking through the mask, I saw only the bolts of sunlight shooting through a brownish haze, and I was a bit disappointed. That’s when I realized I was staring into the void—a hole that Scarborough said measured 27 feet, give or take. Farther toward the upper edge of the pool, the details of the bottom began to emerge: jumbles of rock, limbs, shadows, a darting movement here and there, an entire landscape, invisible unless you had a mask. I was in a staring contest with a couple of cruising bream until some kids bumped me with a kayak.

Around 85 people showed up for the event, and at one time or another it seemed like everyone was in the water. Many spotted tangerine darters just below the riffle at the upstream border of the Blue Hole.

Rakes called the tangerine darter a visually spectacular non-game native fish, and said it would be great if it were the state fish. “After all, they are orange,” he said.

At the Beach, another of Scarborough’s swimming holes about 150 yards upstream, a smaller group told me about seeing redhorse and catching spotted bass. Scarborough, one of the founders of Dagger Canoe and Kayaks, and his wife Annie, purchased 54 acres on Whites Creek in 1992. He has since expanded his holdings to 1,500 acres. He says he’s interested in protecting Whites Creek above and below and supporting those organizations that do that kind of work.

Around 6 p.m., we all climbed the hill from the swimming hole to eat barbecue and listen to the music of R.B. Morris, Greg Horne, and Daniel Kimbro. A blue tarp was rigged over Scarborough’s bottom deck to supplement the shade from a trellis of jasmine and a nearby peach tree. I sat near the stage near a potted tomato plant heavy with fruit. Beyond the band arose a mountain that formed the far side of Whites Creek Gorge. People were scattered in outdoor nooks and crannies, dozens of chairs set up on the “stage” where the musicians played just a few feet away. You could also sit on higher tiers of the deck structure or on the periphery, at a picnic table in the garden area.

Morris, recently named Knoxville’s first poet laureate, began by acknowledging Rakes, who had been involved in a serious bicycle accident and was in the process of rehabilitating from his injuries. After a rousing set of music that included “Roy,” “Hell on a Poor Boy” and “Distillery,” Scarborough took the stage to auction off some items, including an Orion Cooler, art work, and a pair of hiking boots.

Shute says that the funds generated at the event go to overhead and general maintenance of items essential to research, such as kayak trailers and vehicles. Otherwise, he says, their funding is project driven, coming from sources such as Fish and Wildlife and the Tennessee Wildlife Resources Agency, and this doesn’t always cover everything.

When Scarborough told me over the phone that his place “should be a state park,” I was anxious to see it, though a bit skeptical. It exceeded my expectations in its inspiring and isolated majesty, a perfect place to celebrate the preservation and protection of clean water and diverse aquatic species.

Scarborough, who plans to keep hosting and organizing the Whites Creek Palooza, was pleased with this year’s event: “With all the rain, we were prepared for muddy water, but the creek was clear, and everyone got to see lots of our native fishes.”

CFI has another benefit, the Fish Fest, at River John’s Outfitters on July 30. Info: conservationfisheries.org.