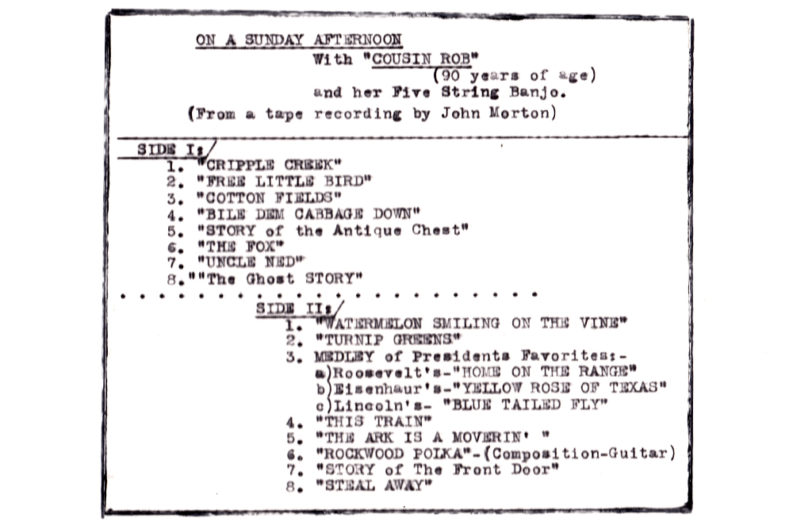 Jim Cooley of Rockwood called up and said he had a record I might find interesting. It was a 1960s recording of a 90-year-old Rockwood woman playing banjo and telling stories. That did sound interesting. I wondered what small local label might have released such a record. Turns out it was a vanity-press record of Robbie Clack, transferred from reel-to-reel tape to vinyl at Loran Baker Recording Service. Baker was a TVA employee who ran a small studio out of the garage of his Fountain City home. In a 1956 News Sentinel ad, Baker offers tape and disc services for “Church Programs, Public Addresses, Funeral Services, Weddings, Rentals, etc.”

The record is a heavy slab, at least 200 grams, housed in a plain white jacket with a handwritten title: “Cousin Rob With Her Five String Banjo at 90 Years of Age.” A typed track list is affixed to the back. It’s likely the only copy made, pressed as a souvenir for Clack and her family. She was born in 1875, so the recording must have been made around 1965, just two years before her death.

The recording is very low-fidelity, “from a tape recording on a Sunday afternoon.” At times you can hear more than one person laughing, suggesting a very casual setting—people gathered with Clack to preserve her playing, singing, and stories. The repertoire is fairly familiar, with songs such as “Free Little Bird,” “Cotton Fields,” “This Train,” and “Steal Away.” No doubt Clack heard some of these songs on radio and records over the years, but to listen to her raw playing and singing, it’s easy to imagine she’d been hearing some of these selections since her childhood. There is also at least one original instrumental composition, “Rockwood Polka,” and three spoken narratives, including two short personal anecdotes and the legend of a haunted well in Rockwood that was the site of a murder/suicide.

It’s exceptionally rare to come across a 1960s-era recording of an East Tennessean who was born in the 1870s, especially one of a woman playing banjo and singing. It can be a bit of a rough listen at times, but maybe that’s fitting for a recording of someone who spent the first few decades of her life without a radio or phonograph player or even electricity. Clack was 15 years older than Dock Boggs, who was recording albums for Folkways at the time, and just a few years younger than Uncle Dave Macon, who died in 1952. You want to be careful not to romanticize this kind of thing, but it’s astonishing to think that around the time the Beach Boys were recording Pet Sounds and Karlheinz Stockhausen’s was composing Hymnen, a woman from a small East Tennessee town made a record that recalled a time decades before broadcast or recorded sound existed.

Another remarkable recording has been under my nose for a few years. I just happened across it while organizing records in the archive. I’d only ever glanced at the back cover of A Wagon Load of Old Time Country Music, a private press compilation recorded in Clinton around 1982. I’d missed the liner notes that mention Willie Sievers Sharp plays piano on her brother Mack Sievers’ recording of “Five Foot Two.” With their father, Bill, and cousin Walter McKinney, Willie and Mack were part of the Tennessee Ramblers, a group that recorded six songs at the 1929 Brunswick-Vocalion Knoxville sessions. There aren’t many recordings by Knoxville sessions performers from the latter half of the 20th century; aside from a home tape by fiddler Newman Wise, this is the latest one we’ve found.

Willie’s piano playing was much admired by her contemporaries in the 1920s and 1930s, but the only chance we’ve had to hear it was in Terry Zwigoff’s 1985 documentary Louie Bluie, about Howard Armstrong, and in outtakes from a 1989 episode of The Heartland Series. That was shot at Carl Bean’s Big Valley Barn in Clinton, and Wagon Load features several of the acts who frequently performed there in the 1970s and ’80s. In addition to the Sievers and Bean, the record features Monroe Queener, Ray Rutherford, John Rice and Elizabeth Irwin, Jay and Janie Ward, and old-time fiddling master Bob Cox. It was recorded just a few years before Mack Sievers died.

The whole album is a lot of fun, but it’s especially fantastic to hear Willie play piano on a record. Here, her rollicking barrelhouse style backs her brother’s take on the 1920s hit “Five Foot Two,” also known as “Has Anybody Seen My Gal?” Mack’s voice was not at its strongest—he was 78 years old at the time, though he and Willie were still performing together around the region as the Novelty Hawaiians. Willie was still playing guitar behind the back and between her legs, referred to in the News Sentinel, before a 1982 Market Square performance, as a “woman trick player.” They must have been something to see, performing in the same place where, nearly six decades earlier, they took part in fiddle contests.

Inside the Vault searches the Tennessee Archive of  Moving Image and Sound for nuggets of lost Knoxville music history.