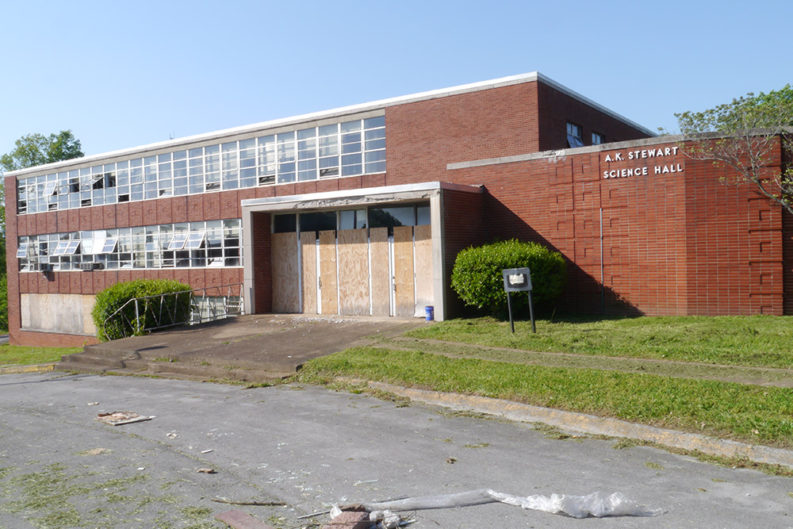 The meeting was held by the Tennessee Department of Environment and Conservation at its Middlebrook Pike headquarters to take comments on the state’s proposal to add the science building to its list of most contaminated properties, often referred to as the state Superfund list.

About 25 people came with questions and some provided comments at the public hearing. Comments seemed balanced between those worried about contamination spreading to the surrounding neighborhood and those who cautioned against listing the site prematurely, damaging its redevelopment chances.

In debt and unable to care for the buildings, the historically-black college founded in 1875 stopped holding classes last year in an effort to regroup before reopening. It made a deal in January with Knoxville-based Southeast Commercial to redevelop the majority of the land. But the nature of the redevelopment has yet to be finalized, and the effort was slowed in May by the revelation that the science building still contained contamination TDEC considers severe. Knoxville College officials at the meeting Thursday said they still hope to resume classes this fall, albeit online.

In 2014, the federal Environmental Protection Agency conducted an emergency cleanup at the science building, which had been essentially abandoned full of highly-reactive hazardous chemicals. The emergency action removed the most immediate hazards, but TDEC officials say mercury levels remain unsafe, other chemical contamination may remain, and vandals keep breaking into the building.

Jane Redmond, who heads up the local Knoxville College management team, said Thursday that she asked EPA to conduct follow-up air and dust testing at the science building. That was done last week, she says, adding she hopes the state will wait for those results before proceeding with a Superfund decision. She says initial tests seemed to indicate the mercury contamination was minimal, mostly in corners and crannies.

“I’m concerned that the community not feel we’re being good neighbors,” she said. “I want the community to know we’re addressing those concerns with the state and EPA.”

Tim Adams, executive director of the Wesley House, came to the meeting concerned about whether other campus buildings might also harbor unexpected contamination. The after-school and summer youth program run by Wesley House adjoins the other side of campus, where until recently vagrants were often seen coming and going from the former arts center, Adams said.

“All this makes you a little nervous,” he said. “If listing will get more investigation done, that will probably be a good thing.”

City of Knoxville neighborhoods coordinator David Massey told TDEC his main concern is whether neighbors will be exposed to the mercury if the science building catches fire. Fires have been set in other campus buildings.

Christine Winton, a member of the Mechanicsville Community Association, came with worries about contamination spreading to the neighborhood through soil or water, but she said she felt reassured about that. She doesn’t want the college to be impeded from operating again.

Southeast Commercial owner Gary Smith, who has been working with potential partners on redevelopment that might include senior or affordable housing, office space and a charter school, says Thursday he had been told the designation would affect all the buildings on the same parcel, or about half the college property.

“I’ve got people who want to move forward,” Smith said Thursday. “But nobody’s going to way to spend millions of dollars if it’s not cleaned up…. We’re waiting to see what’s going to happen in the next 60 days.”

Contrary to previous statements made by agency officials, Steve Goins, remediation division director, said Thursday the state Superfund designation would affect only the science building, not the rest of the campus or even the other buildings on the same tax parcel.

John Sibley, CEO of The Literacy Imperative based in East Knoxville, challenged TDEC to track down the companies that provided the chemicals to Knoxville College and hold them financially responsible for cleanup.

“We all know the school is trying to move forward,” he said. “I’m taking issue with you putting some kind of red tag on it which can give negativity to partners… We shouldn’t take this lightly.”

Robin Heriges, deputy director of the division of remediation, acknowledged to questioners that more air and water testing, as well as soil testing, is needed.

But Goins says the state doesn’t have the budget to pay for additional investigation and cleanup with taxpayer dollars. Adding the property to the state Superfund list provides a clear legal path to recoup the costs from responsible parties, he said. So the only real options are to add it to the list or address it through a legal order from the TDEC director or commissioner. (These can take the form of a “consent order,” basically an agreement between the state and a responsible party to handle the investigation, cleanup and monitoring.)

Knoxville College has already been unable to pay for the initial EPA emergency cleanup, though, and is already millions in debt, so it’s unclear how it can help foot the bill.

TDEC will continue to take comments on its proposal until 4:30 central time July 21. The agency also welcomes any information about how the science building was operated, how chemicals were disposed of and where. Comments may be submitted to Division.Remediation@tn.gov or mailed to Tim Stewart, Division of Remediation, William R. Snodgrass Tennessee Tower, 312 Rosa L. Parks Ave., 14th Floor, Nashville TN 37243.

All questions and comments submitted during TDEC’s public comment period will be answered in a complete document mailed to all commenters within 30 days of that. The agency is likely to make a final decision in two to three months, Goins said.