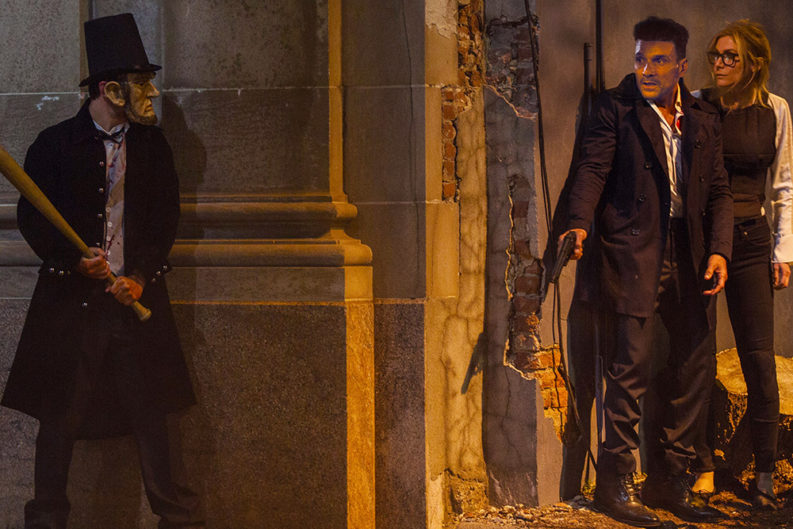 For three summers now, the Purge franchise has attempted to provide an affordable, insular alternative to the bloat normally associated with the summer movie season. It’s hard to throw much criticism at these things; for all their shortcomings—and there are plenty—they’re relatively straight-up, mid-budget affairs that make back their money and then move along. They’ve also become increasingly diverse, which is a welcome change from the majority of American genre franchises, which tend to like their casts as white as an envelope full of anthrax powder.

For those not familiar with the conceit, here’s a refresher: An economic collapse in the late 2010s led to the election of the New Founding Fathers, revealed in this film as racist, theocratic fanatics with plenty of Nazi-ish imagery to spare. The so-called NFFA then instituted the Purge, an annual holiday in which all crime becomes legal for 12 hours. This allows Americans to “unleash the beast within,” releasing their repressed aggression and unburdening the national economy. The Purge: Election Year is the first in the franchise to really dig into the politics of writer-director James DeMonaco’s alternate America, positioning anti-Purge Sen. Charlie Roan (Elizabeth Mitchell) against the New Founding Fathers in a presidential race for the soul of the nation. (Never mind that a country that gives itself over completely to violent crime for even a night wouldn’t last long, or that most people would be much more likely to smoke in a restaurant than participate in ritual murders. These movies require massive suspension of disbelief.)

Anyone who’s seen the poster or trailer for The Purge: Election Year knows that its tagline—“Keep America Great”—suggests that it might cash in on our current political situation. Depending on your political persuasion, it does, to an extent; the image of a well-meaning blonde woman taking on a white supremacist cult isn’t that difficult to imagine these days. In the film, the Purge also attracts foreign “murder tourists” to America, holding up a freakish, funhouse mirror to our real-life country’s international reputation. But the parallels to the contemporary political climate stop right about there.

The Purge: Election Year speaks much more about race than its predecessors. By the end, events in Election Year have escalated into an almost full-on race war, with black anti-Purge radicals doing battle with neo-Nazi mercenaries. Even then, though, the racially conscious subtext is never more than set dressing. Characters of color in this movie live—and die—in the service of Roan, a white progressive reformer.

There are a couple of problems here: first, the characters of color depend on white characters for definition; second, the equation of a black radical group with violence reinforces, however unintentionally, some pretty nasty stereotypes. And that’s without even mentioning that almost every black character in The Purge: Election Year has current or former gang associations, which presents a whole other set of problems.

The Purge: Election Year is a definite improvement over both its predecessors; DeMonaco is much better at urban action set pieces than he is at home invasion-style horror, even if these movies make me wish John Carpenter was still active. Leading man Frank Grillo has the potential for bona fide action-movie stardom, and some of his hand-to-hand combat sequences are almost thrilling.

But there’s not enough of interest to redeem this movie from its failings. DeMonaco spoils his most haunting images, of purgers parading around in patriotic garb and Spring Breakers-style teenyboppers wielding assault weapons, in the trailer. His increasing interest in diversity, however reluctant, is needed and appreciated. But even if his intentions are in the right place, not much else is.