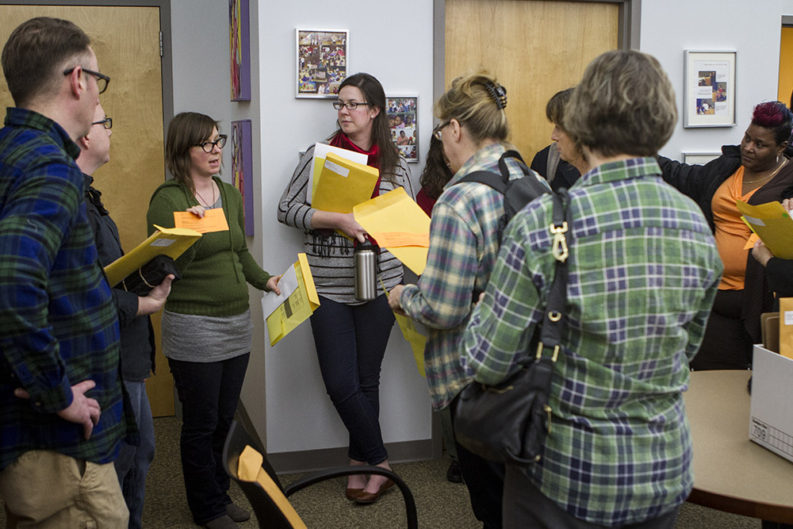 Energetic and a bit frazzled, Lisa Higginbotham hands out paperwork and envelopes stuffed with $1 bills to a dozen or so volunteers gathered in a corner at the Knox County Public Defender’s Office. These are the team leaders, the point-people that will help coordinate a total of 53 volunteers fanning out across the city to meet homeless men and women living on the streets and attempt to ask them questions.

It’s the second night of the three-day-long biennial homeless survey, a regular attempt ongoing for three decades to collect information and quantify root causes of homelessness, as well as track trends within the community here in Knoxville. The survey is a joint project between the Knoxville-Knox County Homeless Coalition and the Knoxville Homeless Information System (KHMIS). The coalition first started conducting the survey in 1986. Now it is assisted by KHMIS, an operation out of the University of Tennessee established in 2004 to track services provided to homeless men and women.

The survey happens about the same time every other year, during the last week of January. That’s when these volunteers—bundled for the cold night ahead—visit food pantries, service providers and shelters, and illegal encampments tucked away on vacant lots and under freeway overpasses to gather data and real-life stories. If the interviewees stick it out, answering the dozens of questions in detail needed to conduct the study, he or she will earn $3. It’s an exercise rarely glimpsed by the general public, or much of anyone outside this small group conducting interviews. To protect the validity of the research, surveyors must also protect the identities and even the locations where they talk to the people they interview.

The data lives on in anonymized charts, graphs, statistics, policies, and reports—the most recent of which was unveiled Tuesday at Flenniken Landing, a supportive housing development in South Knoxville designed to help men and women transition out of homelessness. KHMIS also releases an annual report tallying services and outcomes in conjunction with the biennial survey on even years.

“The thing that continues to puzzle me is this number: 64 percent [of the 249 people surveyed] have been treated for mental illness, and we know a number of these people have also spent time in jail,” explains Dr. Roger Nooe, a coalition member who has helped lead the survey since its inception. “What I think this underscores is how costly homelessness is if we don’t do anything about it. It also underscores the need for more affordable housing.”

Of those who have suffered from a mental illness, 70 percent said they spent time in jail. Nooe says, on average, they served 29 more days behind bars than a person without a mental illness, and are often more likely to have a future run-in with law enforcement. Pointing to work in other communities that has proven successful, Nooe and others stress a need for more affordable housing options and continuing a shift toward a “housing first” model that has vastly reduced the number of homeless people in places like Utah and Phoenix, Ariz. That approach quite literally puts housing first, giving a homeless person a place to live coupled with resources and services to help them overcome whatever obstacles are contributing to their situations, which could be anything from drugs to mental illness or criminal convictions.

“That’s one of the hardest nuts to crack on this issue,” says Michael Dunthorn, head of the city’s Office on Homelessness. “How do we expand access to the services that are already here and how do we find the resources to provide supportive housing as needed? It’s a huge challenge to find those resources and put them in place, but that’s pretty much my focus for the next year.”

Patterson says that improved data collection has also helped better understand issues of homelessness, noting that KHMIS now tracks program outcomes (such as how many people leave a place like emergency shelter or other programs and remain in housing, among many other things) and no longer just tallies demographics. Local rapid re-housing programs, for example, reduced the time it took people to get into a residence by 53 percent from 2014 to 2015, and emergency shelters have streamlined their process by about 8 percent—good signs, he says. Still, more needs to be done to tackle these issues in order to reduce the number of people homeless in Knoxville.

“There are still far too many people who are homeless or at risk of becoming homeless in our community,” Mayor Madeline Rogero said during the press conference Tuesday. “We also know there is not enough housing for low-income individuals.”

Local homeless advocate and executive director of the East Tennessee Peace and Justice Center, Eddie Young says he’d like to know more about how many people total are homeless at any given time in Knoxville, a point-in-time count not included in either of the reports. “We know we have 450 beds, so even if there are 700 people on the street—and that’s a low number—then we know we need more bed space,” he says. (Higginbotham says the point-in-time count wasn’t included because they have yet to be approved by federal Department of Housing and Urban Development (HUD). Unofficially, there were an estimated 748 people homeless in Knoxville on Jan. 28.)

What is clear is that more than 9,000 people in Knoxville sought out services last year, according to KHMIS data, although that may not be a complete picture of how many people are homeless in Knoxville. Nearly half of the people interviewed this January said the loss of a job or some other financial hardship was the main cause of their homelessness. Thirty-five percent cited drug or alcohol abuse, and 34 percent said relationship problems had forced them out. Only 2 percent said they preferred to be homeless.

Nooe notes that the report continues to help dispel myths like most people choose to be homeless or that services attract people from out of the area (the majority hail from Knox and surrounding counties). He noted that the number of homeless veterans has dropped substantially since the first survey 30 years ago, down from more than 40 percent then to about 15 percent today (the number of homeless vets surveyed for this report did increase about 3 percent compared with 2014 figures). Read the full report online at knoxmercury.comυ

Featured Photo: Lisa Higginbotham, in green, instructs volunteers during the second night a the three-day biannual homeless survey on Jan. 26. 53 volunteers fanned out across the city to conduct 249 interviews for the survey. Photo by Clay Duda.