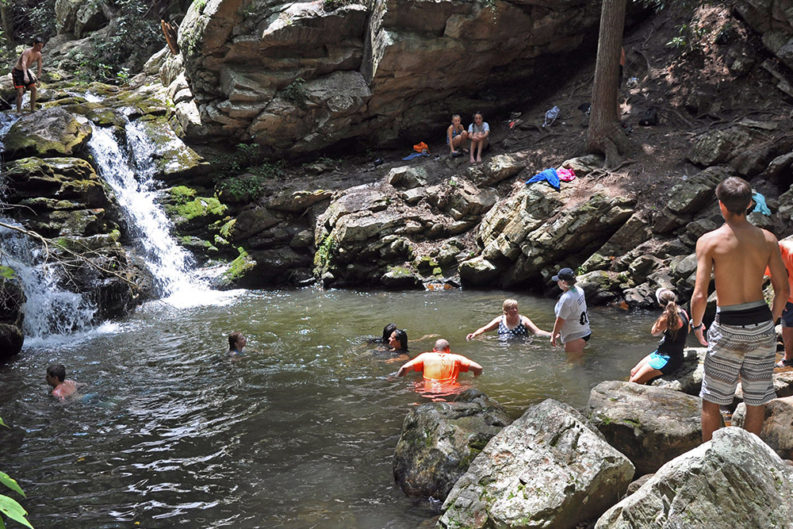 Boulder hopping up a dry creek bed on a quest to find a swimming hole, I was about ready to quit and hike out of the gorge. It was mid June and the water trickled through the rocks and formed stagnant pools ankle-deep at most. I felt a bit foolish in my swimsuit, hauling fishing gear across this rugged terrain, leading biologist Drew Crain to a place that Class V boater Kirk Eddlemon had told me about. We halted in the shade of spherical boulder, and I began to wonder if Eddlemon, author of two whitewater guidebooks, was playing a prank on us. The instructions had started by telling us to take the trail behind the outhouse at Lilly Bridge. Outhouse trail indeed.

If I’d been alone, I would have turned around, but Crain’s optimism spurred us forward. I’m glad it did. At this time of year—the heat unrelenting, the rain scant and fleeting—a good swimming hole can rejuvenate body and spirit.

Here’s what I look for in a swimming hole: cold clean water at a place isolated enough to require a little effort getting there. I don’t care about taking cliff-jumping selfies or socializing. I like listening to the sound of the water, and it’s a bonus if the pool is big enough for swimming a couple of strokes. Below are some recent forays to discover new favorites. 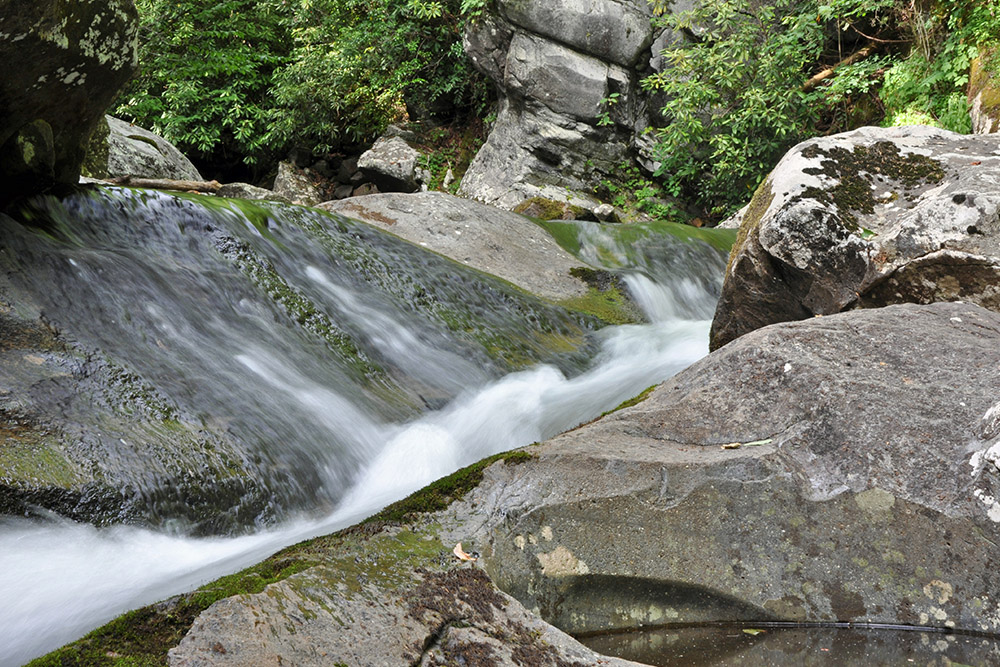 Here are a couple in the Smokies that probably won’t be too crowded on a weekday: Spruce Flats Falls and Lynn Camp Prong Cascades below the Middle Prong Trail. To get to the pool below Spruce Flats Falls, park at the Tremont Institute and follow the signs for the falls. It’s about a mile there, the first half uphill. You’ll probably break a good sweat by the time you get there, an important component, I think, in the swimming hole experience. The pool there is about three times the circumference of a plastic kiddie pool and chest deep when I went on June 15. You’re in a shady glen below a 40-foot cascade that slides down a mossy wall of thunderhead sandstone. The pool is not clear, but it is cold, and total immersion will brace you for the return hike.

On Father’s Day at mid afternoon, the parking lot for the Middle Prong Trail was jammed. From the trailhead at the bridge, I hiked a half mile or so past the first wooden bench, and just beyond it, where a frayed metal cable juts from the ground, descended a steep bank of 30 yards to the mid-point pool of Lynn Camp Prong Cascades. This is a sunny spot with long, smooth bench-like rock to bask on before plunging into one of the hot tub-sized pools below a fall. I keep to the eddies away from the turbulence, and I wear shoes when taking a dip, careful not to get a food wedged. Even though there was heavy traffic on the trail above, few people came down below, and the water is so loud here, you can shut your eyes and imagine yourself in a private paradise. 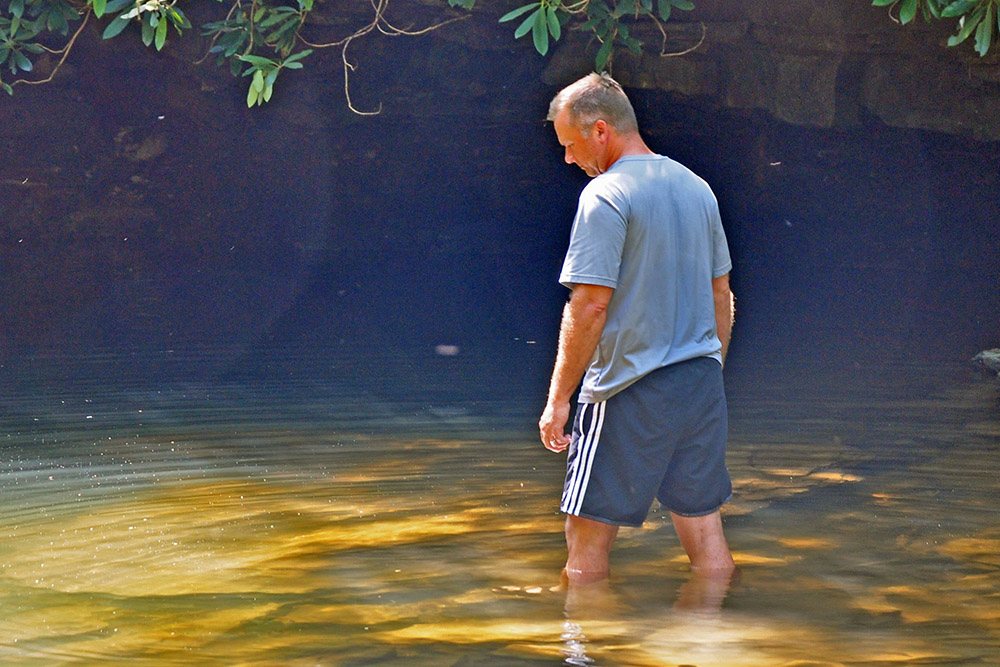 When I asked Eddlemon about swimming holes, he sent me directions to one of his favorites, a pool below Triple Drop, a class IV when it’s runnable at much higher water. He said something about hiking to the climbers’ wall and a half-mile up Little Clear Creek, a tributary of Clear Creek, in the Obed Wild and Scenic River area (near Wartburg) where he’d given me a whitewater kayak lesson. I liked the fact that he always left things a bit vague so I’d have to work a little. Going it alone this first time, it didn’t occur to me to look on map to see where Little Clear came in.

From Lily Bridge I hiked up Bridge Trail to the big wall where “Climb with a Ranger” takes place the first Saturday of every month. I took a left along the wall and walked until I saw a trickle of a waterfall in a splash of sunlight 50 yards below me. Couldn’t be it, I thought.

I hiked along the wall going the other way until I came to the road. Backtracked and descended to the sunny pool. A couple of frogs, yellow-eyed, stared up at me as they tread water. Crawdads the length of my finger scuttled over flat tan rocks.

Backing in, I submerged myself among the pool creatures and arose refreshed, despite thinking that Eddlemon had overstated the mystique of this pool. When I sent him a picture, he said, “What’s that?” and gave me the outhouse directions, starting from the other side of the bridge. This time I took Crain along.

We hiked on the trail behind the outhouse for about a half-mile and came out near the confluence of Little Clear Creek and Clear Creek. A knee-busting scramble over a rugged terrain took us through rhododendron thickets and over slippery rocks and dry washes of driftwood that looked like prime habitat for rattlers and copperheads, notorious in the Obed area.

At the spherical boulder where I was about to quit, Crain persuaded me to go on, at least to the next bend. Weary, we left our fishing gear behind.

Crain got out ahead of me 30 yards, and from a high spot pointed like Ponce De Leon would have if he’d found that fountain: “There it is!”

I could not believe so much water could be pooled in such a dribbling creek bed. The falls came down at a gradual incline, the last part of it 10 or 15 feet tall, a series of shelves above an oval lagoon the size of a basketball court. We eased into water so cold we gasped and sputtered.

A smallmouth bass idled near the edge of the pond and feinted at a water scorpion (non stinging) that Crain tossed to him, striking and then spitting out the bug.

We were too lazy to go back for our fishing gear, but Crain said if this one was just hanging out here, unafraid, no telling how many fish were in there. On the return, we carried out some trash, including Crain’s somewhat disturbing discovery of a diver’s hood inside a lidless cooler.

On June 20 Crain and I went to Gee Creek Wilderness Area off Highway 411 South past Etowah, the turnoff on Gee Creek Road near the hamlet of Delano. I’d been there in the winter but had never hiked past a certain point because advancing up the trail required multiple creek crossings.

A half-mile in, I was surprised by the sound of voices behind us. Closing in fast on us was a gaggle of tweens with beach towels. We picked up the pace, wanting to fish for the Gee Creek rainbow trout before we swam. We outpaced the noisy group and kept hiking until the trail ended at a big leaf magnolia tree and a fallen hemlock. We had only hiked 2 miles, but it involved a lot of uphill and some fancy footwork crossing the stream nine times.

On the way back, we fished four pools and each caught three small fish, five chub, what Crain called “trash fish,” and one rainbow. Below Twin Falls, the tweens, about 15 of them, including a couple of adults, were screaming and squealing and splashing. A church group from Florida, they said they were on their way to Atlanta.

Drew and I agreed that Gee Creek was a great swimming hole, remote and substantial, but it was half the size of Triple Drop falls, and it lacked the revelatory cachet that the hike up there produced.

Here in East Tennessee we have wealth pouring down out of the mountains and welling up out of the ground. It doesn’t cost a cent to partake in these riches, but if you do partake and go to a swimming hole that’s open to the public, be sure to use common sense safety measures and leave the place as clean or cleaner than you found it.