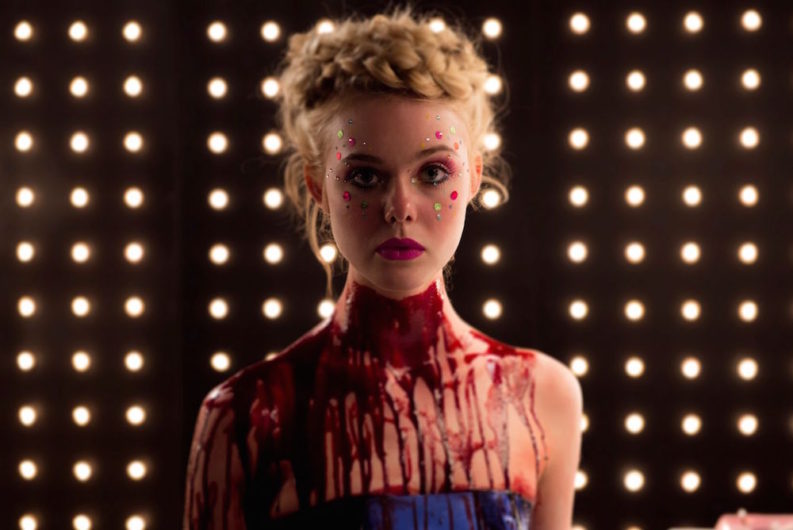 By the time the end credits roll on Nicolas Winding Refn’s dark, lurid fairy tale The Neon Demon, women’s bodies have been coolly evaluated, idolized, ridiculed, painted, invaded, broken, and ultimately consumed—by men, of course, but just as often at the perfectly manicured hands of other women. By turns seductive and repulsive, Refn’s second post-Drive feature almost willfully baits those who’ve accused the director of misogyny, but it’s also a keenly observed treatise on female jealousy and toxic competition.

Don’t spend much time thinking this over, though—it’s all spelled out in flashing peach- and plum-lit letters, so it’s more fun to untangle the film’s narcissistic contortions than look for anything as subtle as subtext. Refn’s first full-fledged horror movie holds up a mirror to a cult of beauty that stretches far beyond the fashion industry, then spends just as much time checking its own hair and makeup. It’s kind of wonderful.

The plot, insomuch as there is one, centers on a moony teenage runaway named Jesse (Elle Fanning, in a remarkable performance—watch her eyes during those languid, uncomfortably long takes). Fresh off the bus from Georgia, Jesse has no skills or special talents—having just turned 16, she hasn’t even finished high school—but she’s stunningly pretty, and she knows her face and body are marketable commodities.

When we first meet her, she’s arranged in a pool of cherry-red blood that drips from her slashed throat as a sinister-looking young man snaps photo after photo. The strobes and clicks evoke a film noir crime scene, but this is simply a photo shoot meant to showcase Jesse’s beauty and the young man’s photography skills. Crime scene, fashion shoot—Refn’s movie imagines them as the same thing, even as it revels in their color and textures.

Yes, most of the movie is that obvious.

Inexperienced as she is, Jesse’s combination of effortless beauty and ephemeral innocence make her L.A.’s rising It Girl. This puts her in the crosshairs of frenemies Sarah (Abbey Lee) and Gigi (Bella Heathcote), a pair of mean girls who have pupated in L.A.’s fashion industry and emerged as lovely monsters. When makeup artist Ruby (Jena Malone, professional scene-stealer) takes an interest in Jesse, her mentorship seems like a benediction to the girl, who otherwise must contend with predatory photographers, self-absorbed stylists, and the sleazeball manager of the seedy motel she calls home. (Imagine a crack house run by Blanche Devereaux, and you’ll get a sense of the motel’s design scheme.)

Given the way Ruby eyes Jesse on their first meeting, I don’t think it’s a spoiler to say that Ruby has an agenda of her own. “Are you food, or are you sex?” she asks the young model in an early scene. It’s a question about lipstick, but it’s a pretty literal summary of the film’s overarching theme.

Most of the bloodshed is reserved for the giallo-tinged excesses of its final half hour, but The Neon Demon is a horror movie nonetheless. Jesse moves through a world of monsters. When she’s not dealing with a cougar infestation in her motel room or keeping a wary eye out for the boorish motel manager played by Keanu Reeves, she must contend with her trio of fiendish peers—one woman is a veritable Frankenstein’s creature of nips, tucks, and other surgical alterations, while another sucks at wounds like the best of Dracula’s brides and yet another likes to get it on with corpses. It would be ridiculous (okay, more ridiculous) if it weren’t so archly funny.

Whether Refn is attacking our tendency to objectify beautiful women or indulging in it is up for debate, but I’m inclined to give him the benefit of the doubt on this one. The film’s climax is so ludicrously gruesome and over-the-top that it affirms earlier hints that The Neon Demon is really a dark comedy; its single act of relatable, real-world sexual violence, on the other hand, plays out entirely offscreen, and is both profoundly frightening and utterly horrific.

This is a film aimed squarely at the midnight movie crowd, and mainstream audiences won’t have much patience for its sleepy pace and dream-logic indulgences. The faint of heart and weak of stomach should also steer clear—the necrophilia scene you’ve probably heard about is even grosser than you might imagine, and the movie ends with a glorious gross-out that could be the summer’s most effective appetite suppressant.

So proceed with caution, but lord, it’s pretty. Whatever else it might be, The Neon Demon is a gory, glittery confection—and really, those two adjectives tell you everything you need to know.