Confessions of a Pat Summitt Superfan - The Knoxville Mercury 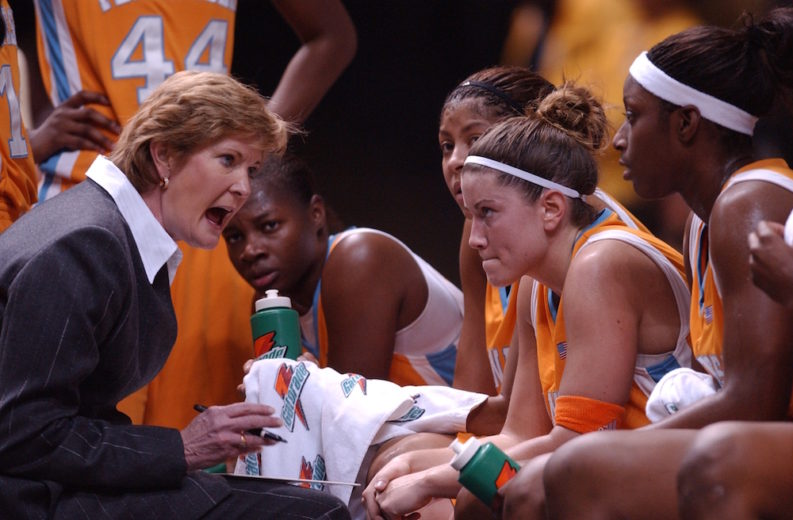 Jayne Morgan is an actress and a longtime fixture of the Knoxville theater scene; she is currently artistic director of Flying Anvil Theatre.

The first time I saw a Lady Vols basketball game was in 1996, when the Lady Vols were on their way to winning a fourth national title. But I didn’t know that. I followed football reflexively, a Knoxville survival mechanism, but women’s sports didn’t register at all.

For good reason. As a card-carrying UT alumni and theater geek, I survived the indignities of having theater parking lots commandeered and performances cancelled whenever the basketball or football teams played. Years of trying to negotiate Byzantine performance schedules in order to avoid game days had built up a callous of resentment. The last thing I wanted to do was support the local sports hegemony in any way, shape, or form.

And I really didn’t like basketball. My only memory of the game was playing half court in high school gym class. There was no women’s varsity team and our gym teacher explained that we weren’t allowed to play full court because the constant running might cause our vaginas to fall out.

While Pat Summitt was driving John Deere tractors and leading her high school teams to victory in Middle Tennessee, the girls of the old Farragut High were jogging carefully the few yards allowed to us on the court, trying to avoid thinking about our lady parts flopping about on the hardwood like so many soggy under-inflated basketballs. I wasn’t much of a player in any case, always fouling out within minutes of the opening jump ball.

So when a group of friends decided to go to a Lady Vols game, I looked upon it as a mildly interesting lark. A chance to experience a sociological ritual as foreign to me as a Santeria chicken sacrifice.

The first surprise came when we purchased tickets, our only choice being the nosebleed section of Thompson Boling. I was surprised to see so many people filling the stands, then stunned to see who those people were. Fathers settling their 3-year-old daughters into their seats. Whole Brownie Scout troops, bedecked in orange hair bows, chattering excitedly and waving pom-poms. I expected mainly women, older parents, a student contingent, but there were kids everywhere. Of all ages.

And men. Lots of men.

After we sat down in our seats, three guys I can only describe as Bubbas sat in front of us in camouflage and ball caps. Uh oh. Here comes trouble. I comforted myself with the thought that if they got too rude and crude, I could always go home early. Then the game began.

I can’t tell you who we played or the final score; that hardly mattered. What did matter to me, taking my breath away, was seeing a crowd of 17,000 or more go crazy cheering a women’s team as it pounded up and down the court, battling, sweating, competing, all under the famous Summitt stare that could cow a platoon of Santeria priestesses.

And those Bubbas? They knew every player by name and stats. They yelled for the women and cussed out the refs. It wasn’t a women’s game to them, it was a helluva game. Oh brave new world, they cared!

And this is why women of my age don’t just love Pat Summitt, we revere her. Unlike men, most of us didn’t grow up with team sports. We weren’t taught how to be competitive. To reach for greatness. In anything, ever. At least I wasn’t. But Pat has been teaching all along that it’s in there—in each of us, if we’re willing to work for it. It doesn’t matter when it comes, whether you are 12 or 68, man or woman, Bubba or theater geek, that is one powerful message right there and when Pat Summitt says it, you believe it.

After that game, I was hooked. I became a fan, read Pat Summitt’s books, and wondered if I could have cut it on her team. I found myself missing something I never realized I lacked: a coach. To drive me to expect more of myself, looking deep inside of me with that thousand-mile stare, never satisfied, never accepting anything but my best. Too old, unathletic, still not that into sports, it doesn’t matter. I want to play for Pat Summitt. Right now. I want to run sprints for her, run till I puke. I want to throw elbows and take a charge. I wanted her to be our coach forever.

But Pat knew that the flip side of teaching us we can be better than we ever dreamed, is teaching us to recognize our limitations. Realities must be faced, even if they suck. You can’t will yourself to be taller. And working harder won’t stave off age, or the cruel fact of Alzheimer’s. Facing a foe there is no good defense against, Pat was coaching all of us right up till the end—developing new techniques for accepting loss with grace.

I teach acting classes and sometimes I tell myself I’d like to be the Pat Summitt of acting coaches. It’s a daunting challenge. She taught me what a coach could be—demanding, yes. Caring, absolutely. She was all about making us believe we are bigger and better than we have ever suspected. That’s the example of her life. Not that we never lose, but that we never settle for anything less than our best effort, come what may.

I never met Pat Summitt. But she is my coach too.