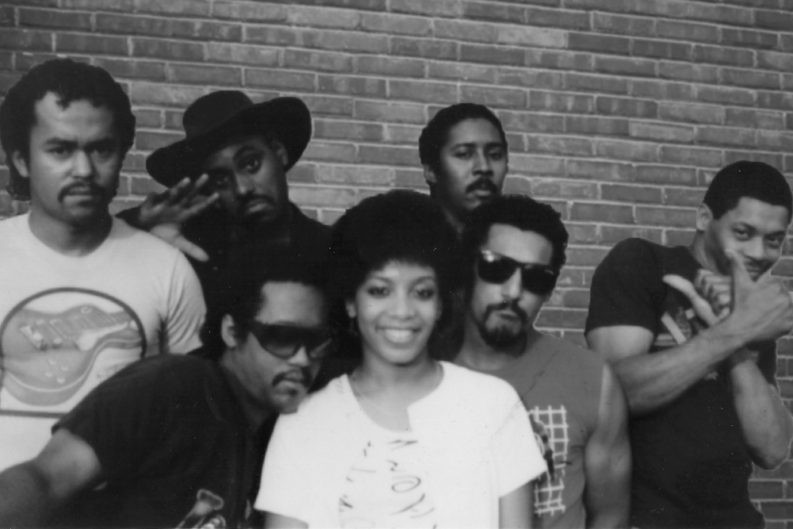 The veteran Knoxville R&B musician Rick Lomax visited the Tennessee Archive of Moving Image and Sound recently. He brought with him a few records, a video, and a lot of stories about Knoxville’s R&B scene in the 1970s and ’80s. Lomax is currently in local band Eastwind, but he’s been playing around town since the ’70s, most notably in Player’s Choice, a band he started with his brother, Paul. Player’s Choice recorded a couple of singles at Big Mama Studios in the mid 1980s—Lomax can’t remember the exact year—and these 45s offer a glimpse of what you might have heard at a black club in town at that time.

“Message in the Music” is an up-tempo number with a touch of electro-funk influence—the synthesizer part must have sounded futuristic at the time. Dwight Hardin, who often performed live with the band, sings on the record; the B-side is an extended instrumental version of the song, clearly intended for dance floors. On the other single, Leonard Means sings the soul ballad “Am I the One” and Lejuana Dean takes vocal duties for the B-side track, “Watch That Space.” They’re an interesting pair of records. It’s not often you find local bands releasing singles with a different vocalist on each side. Together, the two records reveal the range of a band that obviously played frequently and knew how to please the audience with a variety of songs.

The DVD that Lomax brought, titled “Night With the Stars,” offered a more sustained and intriguing look at what was happening in the local R&B scene in the early 1980s. Originally shot on VHS, the audio and video quality suffer from that format’s limitations, but it’s still an incredible document of some of Knoxville’s best R&B musicians of the time.

The concert took place at Harper’s V.I.P. Lounge, run by John Harper from 1978 to 1987 and located where McCalla Avenue meets Holston Drive. Lomax estimates the club held from 250 to 300 people. It hosted, he says, touring acts like Bobby “Blue” Bland, the Chi-Lites, Roger Troutman, and Anglo Saxon Brown, as well as numerous local bands.

The band that night was led by Chico Crawford, one of the most respected keyboard players ever to hit Knoxville. Lomax says it was an honor for Player’s Choice to back Crawford, who always had his pick of musicians. At this point, Player’s Choice was made up of Lomax (keyboards), his brother, Paul (bass), Marcy Mills (percussion), Gary Moulden (guitar), and Kenneth Robinson (drums). Guest musicians drop in—Hucklebuck McMillan on guitar, Robert Spencer on keyboard, and a man known only as Soap Gun on congas. Dwight Hardin sings the first number; he’s followed by Sharon Mosby, who is introduced as having worked with Cannonball Adderley and his brother Nat Adderley. Harold Hardy comes on and delivers a knockout performance that shows why he was a giant of the scene for decades. The women in the audience shouting back at him between vocal pauses gives you an idea of how beloved he was.

Perhaps most surprising guest appearance was a vocal spot by longtime local club fixture Fred Logan. Logan, who tells the crowd he’s 76 years old, opened his first club on Gay Street in the 1930s. Some of the clubs he operated included the Paradise Club, the Five-Point Lounge, the Flamingo, the Showboat, and the El Rocco at Vine and Central. Logan was apparently quite a character—in the Knox County Public Library’s Paper to Pixels archive of the News Sentinel, he’s referred to more than once as a “well-known police character.” His performance of a blues medley at Harper’s V.I.P. gives some hint of his personality, and his spoken asides and the way he carries himself on stage let you know he was right at home in the setting.

The 90-minute concert is a great revue of familiar blues, soul, pop, and funk numbers, with several instrumentals that let the musicians show off their considerable skill. Lomax says he and his friends and colleagues came up under the tutelage of what he calls the “pioneers,” working musicians a generation or two older who were well-versed in blues, jazz, and pop standards—that’s why the musicianship was so good. When Player’s Choice and other bands like Genuine Black and Soul Liberation came along in the 1970s, they knew those standards but were also tuned in to contemporary radio, so they added their own spin to the past and present.

A lot of the performers from that night have since died. Those who survive, like Crawford and Lomax, are now the older generation, and they’re still out there gigging. Maybe some younger players are paying attention.