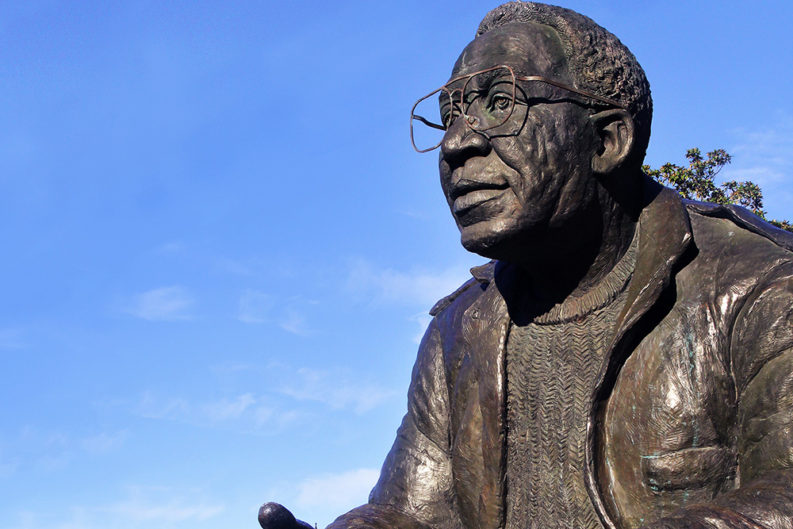 Kuumba, the festival of African-American culture, has been celebrated in Knoxville every year since 1989.

Different every year, the festival usually includes the Kuumba Watoto drum and dance ensemble, and a “Junkanu Parade,” like no other parade in the year, it includes drummers, dancers, and colorfully dressed stilt-walkers, often surprising office workers downtown on the Friday evening of Kuumba. Following the parade will be a performance by the Ogya World Band on Market Square.

This year, other musical performances will include Rev. Osagyefo Sekou and the Holy Ghost Band, gospel artist Sean Steward, and Zakiyyah (“Zock”) Modeste and her five piece band. For more, check kuumbafestival.com. The Saturday and Sunday performances will take place at Morningside Park and Haley Heritage Square.

African Americans have been part of Knoxville’s population and culture since the city’s founding. Throughout the period of slavery, Knoxville was home to both slaves and free blacks. Knoxville’s black population has been as high as about 30 percent, early in the 20th century, but due to suburbanization and some out-migration, the city’s black population is today 17 percent. Still, that proportion is higher than that of the United States as a whole.

Kuumba is a Swahili term for “creativity.” Knoxville-born blacks especially known for their creativity include modern artists Beauford Delaney (1901-1979) and his brother Joseph Delaney (1904-1991); modernist poet Nikki Giovanni, born here in 1943, who is now on the faculty of Virginia Tech, but is still a frequent visitor; and bluesman / actor Brownie McGhee (1915-1996), and his brother Stick McGhee (1917-1961), whose career links him to the dawn of rock ’n’ roll.

Others moved here later. Musicians Carl Martin (1906-1979) and Howard Armstrong (1909-2003) lived and performed in Knoxville for several years in the 1920s and early ‘30s, at the beginning of their careers that linked jazz, country, and blues. Blues singer Ida Cox (1896-1967) moved to Knoxville after most of her performing career was over, but she lived here when she made her only record album. Author Alex Haley (1921-1992) moved here when he was already famous for Roots.

James Brown, Godfather of Soul, never lived in Knoxville, but visited repeatedly both to perform and because he had a business interest here. In the late 1960s he launched a black-oriented radio station, WJBE, which broadcasts to this day at 99.7 FM and 1040 AM.

This weekend is also the weekend of the Ijams Nature Center’s Meadow Lark Festival, an annual music festival on the unusual grounds of the riverside nature center. Ijams is today a fascinating museum of both natural history and human history, as the center unites artist/ornithologist Harry Ijams’s ca. 1910 bird sanctuary with adjacent historic marble quarries, now mostly returned to nature but still discernible, almost like ancient ruins. See ijams.org for more.

A few birthdays this week offer further reason to celebrate:

– June 23 is the 243rd birthday of the Virginia-born judge and journalist who served as Knoxville’s first mayor, Thomas Emmerson.

– June 25 is the 157th birthday of Adelia Lutz, the artist for whom the unusual 1890 house known as Westwood was built.

– June 29 is the 190th birthday of Julius Ochs, founder of Knoxville’s first Jewish congregation, Temple Beth El. A Union officer during the Civil War, he was married to a Confederate sympathizer, who was, like himself, a Jewish immigrant from Bavaria. While in Knoxville, he served as a justice of the peace, and helped plan one of the first bridges across the Tennessee River here. He also reportedly composed an opera based on the Book of Ruth. He was the father of Adolph Ochs, who went on to be the influential publisher of the New York Times.

Featured photo: The Alex Haley statue at Haley Heritage Square in Morningside Park, site of much of this weekend’s Kuumba festival, is the largest statue in the city. Completed in 1998, in a major effort that included Appalachian African-American Arts, planner of Kuumba, it’s one of the best-known works by California sculptor Tina Allen (1949-2008). Photo by Tricia Bateman.