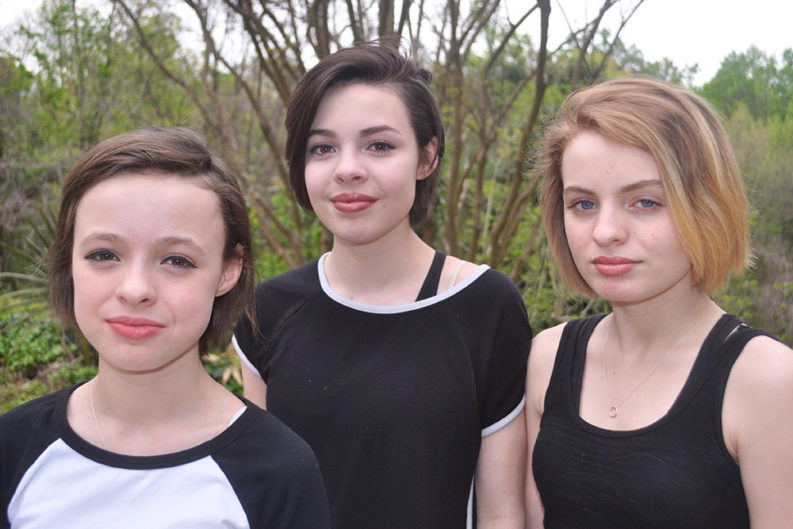 As the daughters of local singer/songwriter and guitar player extraordinaire Kevin Abernathy, the trio of sisters comprising the Pinklets have a legacy to live up to. Yet they’ve already one-upped their more seasoned sire in at least one respect—they played the New Music on Tap stage at this year’s Bonnaroo Music and Arts Festival on June 12.

“It was sort of surreal,” says singer/guitarist Lucy Abernathy, 13, of the recent Bonnaroo venture. “I’d always seen pictures of the Bonnaroo stages, followed the festival on social media. But actually being there was just crazy. It was so cool.”

“We played the last day, so we had two days to just relax and have fun,” says drummer Eliza, 11. “Even though there were adults all around us, we all felt really comfortable. We almost forgot we were there to play.”

They’re a precocious, articulate bunch, these Abernathy sisters. The girls say that they were each attracted to their respective instruments at an early age; they formed the Pinklets back in 2008 at the behest of eldest sibling Roxie, now 16.

“I thought it would be fun to have a band with my sisters,” says Roxie, the Pinklets’ keyboardist and sometimes bass player. “And that urge to play hasn’t dissipated any since then.”

But Roxie characterizes the band’s early music as slight, kid-friendly fluff—“silly stuff, a lot of stuff that didn’t make sense,” she says. Slowly, though, the sisters’ attitude toward making music changed as they grew older and assimilated more adult pop and rock. Then came an appearance on Kid Stuff, a weekly show on WDVX 89.9 FM hosted by Sean McCollough of the local folk/Americana band the Lonetones.

That was a turning point of sorts, Roxie says, the point at which the Pinklets began shaping up as a serious, long-term endeavor. In the meantime, their parents, Kevin and Christine, recognized that their daughters possessed a rare combination of talent and dedication; the Pinklets began playing around town at parties, weddings, and other events.

The girls have a handful of videos online, dating back to the early days of the band. It’s fascinating to watch as they evolve through the years and come of age musically, becoming more confident, more stage-savvy, better able to navigate tempos and changes.

Eliza and Roxie point to Lucy as the natural songwriter in the band, though they both contribute parts and ideas along the way, and help in crafting arrangements. Lucy says her father was a major inspiration, as a songwriter as well as a guitarist.

“I’ve always liked to write,” she says. “But if there hadn’t been such a talented guitar player and songwriter in the family, I probably wouldn’t have played guitar, or started writing songs.”

The Pinklets’ local profile was already on the rise when they took the New Music on Tap stage a couple of weeks back—they landed the Bonnaroo slot when AC Entertainment chief Ashley Capps happened to catch a portion of their set at Waynestock, the annual Knoxville music festival founded in honor of News Sentinel music writer Wayne Bledsoe’s late son, Andrew.

The next logical step, the girls agree, is to enter the studio.

“We definitely want to record,” Roxie says. “We don’t just want people to see us on a YouTube video from two years ago, because we’ve improved a lot since then.

“We also want to continue performing and improving as artists. And we want to make audiences happy. That’s one of the most important things for us, making people happy with the music we play.”

The Pinklets play at WDVX’s Meadow Lark Music Festival at Ijams Nature Center on Saturday, June 25. The festival runs from noon-11 p.m. and also features Dale Watson and His Lone Stars, Southern Culture on the Skids, the Barstool Romeos,  Four Leaf Peat, Red Shoes and Rosin, the Grassroots Gringos, and the the Patrick Beasley Band.