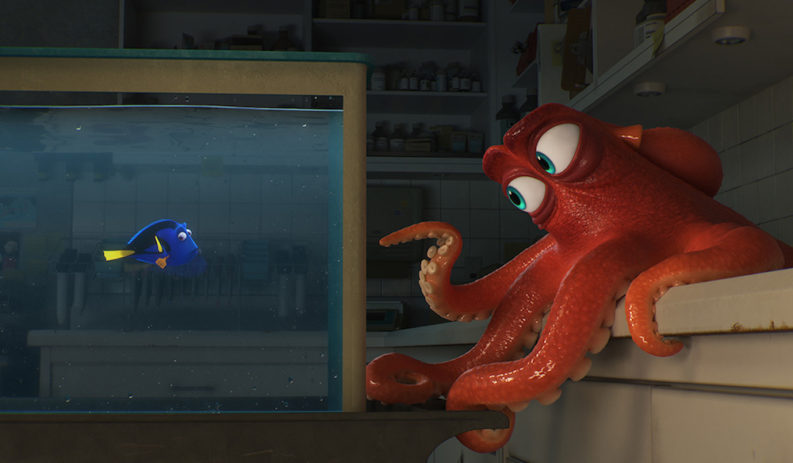 Leave it to Pixar to turn a riptide of obstacles into an ocean of opportunities. Not only does Finding Dory, the studio’s long-awaited follow-up to 2003’s Finding Nemo, hand off its story to a scene-stealing B-team character—a risky proposition, even in the most skilled hands—but it also trades the limitless visual spectacle of the open ocean for the decidedly more prosaic setting of a worn-at-the-edges aquarium. Then there’s the central problem posed by its main character: How do you build compelling kid-friendly drama around a critter whose defining quality means she’ll almost immediately forget any trauma that befalls her?

But then Pixar does its thing, and in one concise story beat, Dory’s perpetual short-term memory loss is transformed from a running gag to a disability that causes much fin-wringing for the little fish’s family. The story begins in flashback mode, with a googly-eyed baby Dory (voiced in these scenes by Sloane Murray) being gently coached by her parents, Charlie and Jenny (Eugene Levy and Diane Keaton), to find help in the event that she wanders off and can’t remember how to get home. In short order, the couple’s worst nightmare is realized when the tiny blue tang is separated from them and forced to fend for herself, quickly forgetting that she even had a family in the first place.

This savvy reverse engineering pays off when the film leaps forward to present day, which, in this case, is one year after the events of Finding Nemo. Dory is still chumming around with Marlin the clownfish (Albert Brooks again) and his son (Hayden Rolence this time), but now her forgetfulness is couched in pathos and emotional heft. (Don’t worry, it’s still very funny.) When sudden jagged memories remind Dory that she has parents and that they might be at a Monterey Bay aquarium called the Marine Life Institute, she sets off to find them, with Marlin and Nemo in tow.

It’s tempting to lament Dory’s lack of Nemo’s near-mythic sprawl, but it finds its own kind of adventure in its contained setting. Dory is more episodic than Nemo, with much of the film devoted to a succession of slapstick routines and fast-moving action sequences as Dory tries to make her way across the aquarium from exhibit to exhibit—sometimes in tanks and pools, but just as often in buckets, coffee pots, and even a sippy cup.

Like so many Pixar movies, Dory relies on a veteran cast to voice an assortment of well-drawn characters, from Ed O’Neill’s grumpy seven-armed octopus (Dory calls him a “septopus”), to Idris Elba and Dominic West’s scheming Cockney sea lions. It’s a testament to star Ellen DeGeneres’ enormous appeal and her skill in the sound booth that she’s never upstaged by any of the movie’s supporting players (though Sigourney Weaver’s turn as the aquarium’s god-like recorded celebrity narrator comes close).

The breathtaking, otherworldly seascapes that marked Finding Nemo are mostly absent here, and, with the exception of a chase scene involving an incandescent squid, so is the almost constant threat of danger. (The narrative might suffer a little for its lack of any discernible villains, but maybe there are already enough of those to go around these days.) But the creative and box-office success of Pixar’s films has always owed as much to their writers as their animators—Finding Dory might be smaller in scope than its predecessor, but it’s at its best when it puts its characters center stage and treats them with sincere tenderness and affection. Most of them, including a near-sighted whale shark and a beluga whale with a busted echolocator (or so he thinks), struggle with some sort of disability, but like Dory, their journey isn’t so much about overcoming their physical and cognitive differences as learning to use them to their advantage.

If it’s innovative animation you’re looking for, though, Finding Dory provides it in the form of its glorious opening short, “Piper,” which stands among the studio’s best efforts in terms of sheer visual inventiveness and technical virtuosity. As is so often the case, it’s worth noting that the 3D in Finding Dory is almost entirely superfluous, so save your bucks and skip the up-charge, but do stick around for a clever post-credits Nemo callback.