Candies Creek: Life in a Birders’ Paradise, Far From the City - The Knoxville Mercury 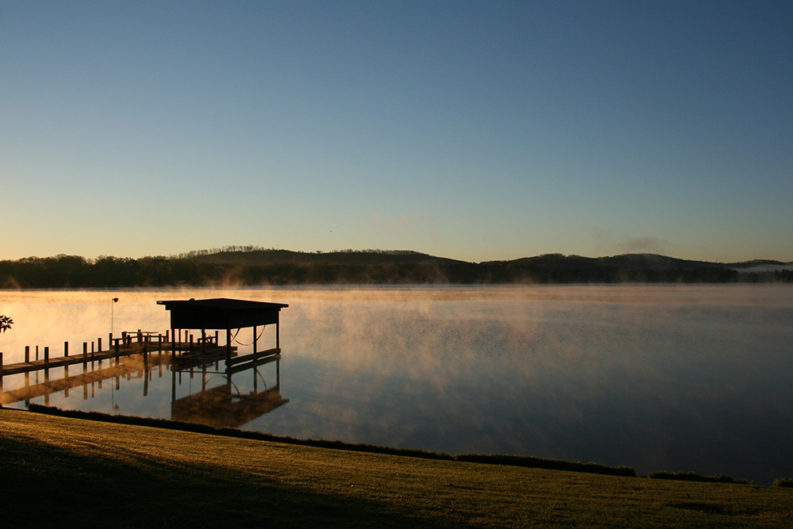 I miss Knoxville, I really do. When Doug and I both had to make a job move in 2009, I thought surely we would be back in a few years. That hasn’t happened yet though I refuse to give up hope. But one thing I didn’t expect during my exile from Knoxville is the birders’ paradise we’ve lived in for almost five years: Candies Creek in Bradley County.

Candies Creek flows into the Hiwassee River just downstream of the paper mill in Calhoun. Chickamauga Lake backs up there to form a wide, shallow embayment that teems with fish, large and small, in every season of the year. That constant food supply and some state-protected habitat along parts of its shoreline make it very popular with waterfowl and fish-eating birds.

The royals among these are the great blue herons, the most ubiquitous year-round residents. Hardly a day goes by that one isn’t poised at the corner of our boat dock or stalking the edge of the lawn. I’ve counted as many as 40 great blue herons at a time hanging out among the stumps exposed by winter low pool. I’ve marveled at how large a fish those birds can swallow, seeing its fishy form distending that long, narrow neck on its way down.

Fewer in number but more dramatic to watch are the ospreys that hunt hawk-like from great heights. Once a fish is spotted, the osprey drops out of the sky with startling speed, hitting the water with such violence it is almost surprising to see it rise back up into the air, often grasping a fish so large it can hardly be carried aloft.

We see bald eagles more often in winter than summer. The eagle’s massive build and menacing expression seems to make the great blue herons uneasy when one drops in to see what’s going on. You might not think of our national bird as a scavenger, but eagles will eat any freshly-dead fish or ducks they find along the shores.

Ducks pass through in spring and fall, occasionally in small flocks, more often just a pair or single individual. Canvasbacks, pintails, grebes, and ring-necked ducks might spend just a night resting and eating. A few dozen chubby coots looking like black, swimming chickens will bob and preen under the boat dock for a day. A flock of hooded mergansers might stay a week or longer, swimming and diving after small, schooling fish as a coordinated group. Our resident duck species, the woody, doesn’t eat fish and is thus more tasty and seems to know it by its extreme shyness toward people.

White pelicans are new seasonal visitors that show up in increasing numbers each spring and fall. Three or four years ago the first flock of six appeared in the middle of the embayment one morning. Much larger than brown pelicans, they are a striking sight. They keep their distance from people and houses, preferring to move and rest in a tight group in open water or closer to Chickamauga Wildlife Management Area on the south shore. Sometimes they stay for two weeks or more, other times a single night. This spring upwards of 300 white pelicans spent a few days alternately clumped into tight, white islands and fanning out across the water to fish. Their slow, smooth dipping of beaks seems choreographed, perhaps to avoid startling the fish they are about to swallow.

Several hundred small gulls, Bonaparte’s I think, spent a few weeks slaying the small fish concentrated in Candies Creek’s main channel two years ago during low pool. That abundance of food also attracts double-crested cormorants, some of which are adapting to life in this region year-round. They tend to fish in small groups and are powerful swimmers, staying underwater for up to twenty seconds and traveling twice that many feet before surfacing.

Another former migrant who has decided to stay all year is the Canada goose, and several nest each spring on the wooded islands along Candies Creek and the Hiwassee River. Their honky chatter echoes across the still water some evenings. Lately we see them quietly cruising by in extended family groups with their buff-colored young.

The distinctive call of sandhill cranes is more common here some years than others. The wildlife refuge that hosts the sandhill crane festival is about 7 miles away as the crane flies. Last year, during the two weeks leading up to their spring migration, they gathered by the hundreds each evening to roost on the mudflats within sight of our house. This spring we hardly saw or heard a single crane.

And that’s something that keeps life on Candies Creek embayment so interesting. With each year’s seasons there are predictable cycles embedded with surprises. You can just about mark your calendar for the day the barn swallows return each spring. Then again there will be the surprise appearance of something we’ve never seen before, like the pair of rails that visited our dock for several days last summer. There seems no pattern at all to when the kingfisher will be a daily presence or when it will go unseen for months.

These are just the birds we see when gazing toward the lake. All around us are the field and forest dwellers as well. I’m grateful to be able to call this place home for now, even if I do have to drive 75 miles to pick up a Mercury.