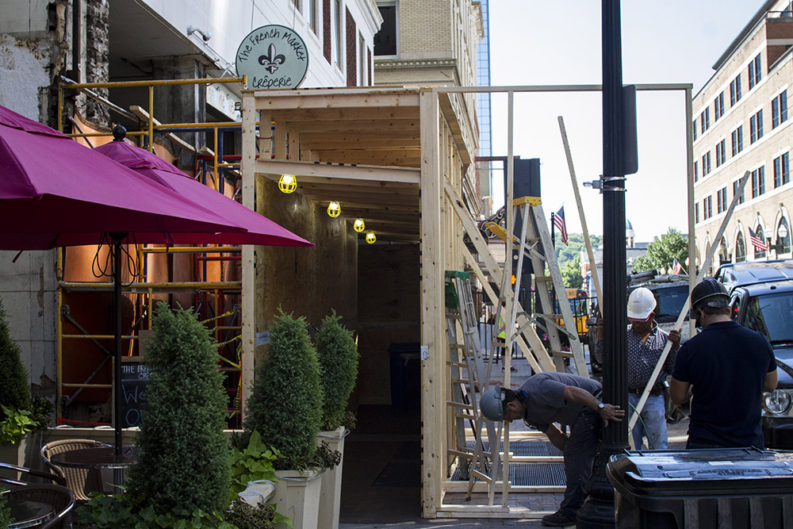 Is Starbucks going to replace the French Market Crêperie on Gay Street? That’s a rumor that’s been making rounds in recent weeks, and it’s also one of the most recent sticking points in an ongoing, public dispute between French Market co-owner Allen Tate and building owner Rick Dover.

The short answer is no. Starbucks isn’t going to replace downtown’s go-to crêperie. But a Starbucks is slated to open in the same building, in the lobby of the Hyatt Place hotel, once current renovation work on the Farragut building wraps up next spring, Dover says.

But that explanation hasn’t stopped the rumor mill. After Tate took to social media last week voicing concerns that Dover was trying to squeeze his business from the space it has occupied since 2008, many saw it as a coming-of-age battle for downtown. As the city’s core continues to (re)gain momentum—and property values continue to rise—could the mom-and-pop mainstays that have long contributed to its quirky charm and revitalization be forced out by corporate behemoths looking to edge into the market?

Taking to the French Market’s Twitter and Facebook, Tate posted a series of updates accusing Dover of “trying to force us out of business and cancel our longterm [sic] lease without compensation!” Among his grievances, Tate alleges that Dover Development has made a number of slights aimed at making business more difficult, such as moving curbside garbage cans, rescinding a sidewalk seating agreement, and even going as far as to file complaints against the restaurant with the Knox County Health Department, city of Knoxville Fire Marshal’s Office, and city building code inspectors.

The most noticeable recent development may be a large plywood wall blocking off a portion of the sidewalk and creating a sort of tunnel entrance to the business that was constructed last week. Plexiglass windows have since been added offering a view of the restaurant. Dover says the wall and other recent changes are all necessary parts of renovating the nearly 100-year-old building. As part of the work, the entire building must be brought up to current building and safety codes, and the plywood covering is necessary for pedestrian safety as contractors work to repair some terra cotta tiles on the building’s face over the next three weeks. Still, Tate said he would have liked to see the use of more transparent scaffolding that allows foot traffic underneath—the type common in many construction zones in cities like New York—to limit impacts to business.

“We’re absolutely no trying to squeeze him out,” Dover says. “The French Market is a great tenant. They’re an asset for downtown and I don’t want to get crossways with them. I’m sure they’re frustrated [with the construction] and I’m very sorry for the inconvenience.”

Records show that Dover Development building superintendent Jack Shrode did file a series of detailed complaints against the restaurant with health and fire inspectors in mid-March, according to documents obtained by the Mercury through a Tennessee Open Records Act request. He also filed an in-person complaint with city building inspectors on June 7, after the business dispute became public, according to city spokesman Eric Vreeland.

Dover contends the complaints were made as part of routine renovation work.

“He’s just doing his job,” Dover says. “Please keep in mind that we’re doing major renovation work to a historic building—to the tune of $20-plus-million—and I’m not interested in spending that money and doing 99 percent [of needed renovation work] while someone else has egregious code violations in the same building. French Market occupies 1/200th of the building, but that’s doesn’t exempt them from code. I’m not going to have somebody staying in a hotel with a fire hazard down stairs, or a health hazard, or any hazard.”

A 23-page complaint typed on Dover Development letterhead was submitted to the Knox County Health Department detailing 12 alleged health violations in the eatery. The complaint was made just two days after health inspectors paid a routine visit to the restaurant, giving it a near-perfect health score of 99. A follow-up inspection in response to the complaint noted no serious violations, but did include a few suggestions for the restaurant.

A separate 27-page, 13-count complaint was sent to the city’s Fire Marshal’s Office around the same time. At Shrode’s request, the fire inspector listed the subsequent inspection on June 1 as “routine” and not in response to a complaint. “We don’t automatically do routine inspections unless someone calls with a certain reason, and they have a certain reason,” says fire inspector Sonny Partin. During the walk-through, Partin noted a series of minor violations and corrective actions to be taken within three weeks, most of which have already been resolved, he says.

A city building inspector noted three minor violations that need to be corrected, two of which were also cited by the fire inspector: removing extension cords and taking down an exit sign. It also noted that the type of lock on the restaurant’s front door would need to be changed.

In April, Dover Development and White Lodging announced plans to convert the long-vacant former Farragut Hotel building into a new 165-room Hyatt Place hotel. The city’s Industrial Development Board approved a 25-year Payment in Lieu of Taxes (or PILOT) agreement that could save the developers $7.29 million.

Dover is also seeking a 30-year, $2.7 million tax incremental financing (or TIF) agreement with the city to redevelop the Pryor Brown garage building at the corner of Church Avenue and Market Street. That arrangement would first need approval from the Knoxville City Council and Knox County Commission. During a press conference announcing redevelopment plans earlier this month, Mayor Madeline Rogero commended Dover Development for taking on a list of high-profile, but tough renovation projects, including work on the Farragut Hotel, and converting the old Oakwood School and soon the old Knoxville High School to senior living facilities.