Bear Country: Learning About Those Other Big Inhabitants of the Smokies - The Knoxville Mercury 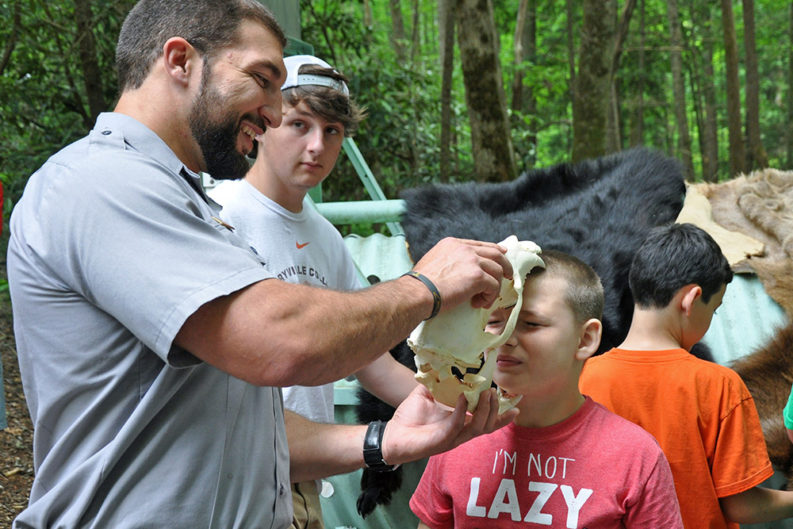 Fifteen years ago, Richard Hatten was sleeping in his hammock at Elkmont Campground in the Smokies when something bit his arm and pulled him to the ground. A neighboring camper, up late drinking Scotch beside his campfire, heard the commotion and drove the bear away with blows from a broomstick. Having grilled and consumed barbecue chicken earlier that evening, Hatten speculates that the black bear was attracted by the scent on his clothing.

From this encounter, Hatten met park ranger Bill Stiver, who helped Hatten conceive and carry out a hands-on educational program for kids at Elkmont, in association with the local chapter of the National Wild Turkey Federation.

Hatten, youth activity director for the local NWTF chapter, says the program, in its third year, is designed to teach kids about conservation from fisheries and wildlife experts and also to give them an idea of what it would be like to work as a park ranger or in a related outdoor education field. The theme of this year’s event, on June 2, was “Creating Conservationists,” a goal that Hatten connects with the NWTF’s 10-year initiative, “Save the Habitat. Save the Hunt.” 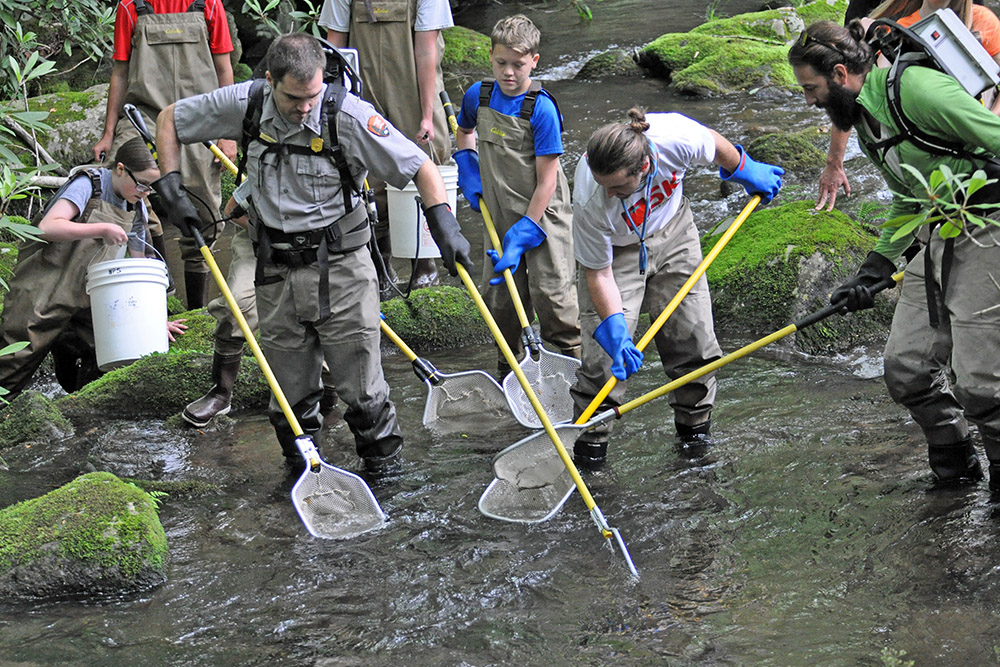 The fisheries demonstration, led by Ranger Caleb Abramson, got the kids involved in surveying fish from a stream using electrofishing techniques. After placing a block net upstream, a group of interns employed backpack electroshocking equipment, and the kids followed along with nets and buckets to collect stunned fish.

This was learning far from a PowerPoint lecture in an air-conditioned classroom. In chest waders, the kids were splashing around in a stream, handling slippery fish, and having a great time getting involved in data gathering that takes place every day in the Smokies.

Ranger Abramson held up an aquarium-like tank with a rainbow trout and a brown trout (about 8 inches long) in it. As the kids passed the tank around and the stunned fish began to revive themselves, he explained how and when each non-native fish arrived in the park: the rainbow, from California, stocked starting in the early 1900s until 1975; and the brown, originally from Europe, brought in (but not by the National Park Service) starting in the 1960s.

The rangers and interns recorded the weight and approximate age of the fish before releasing them into the creek. 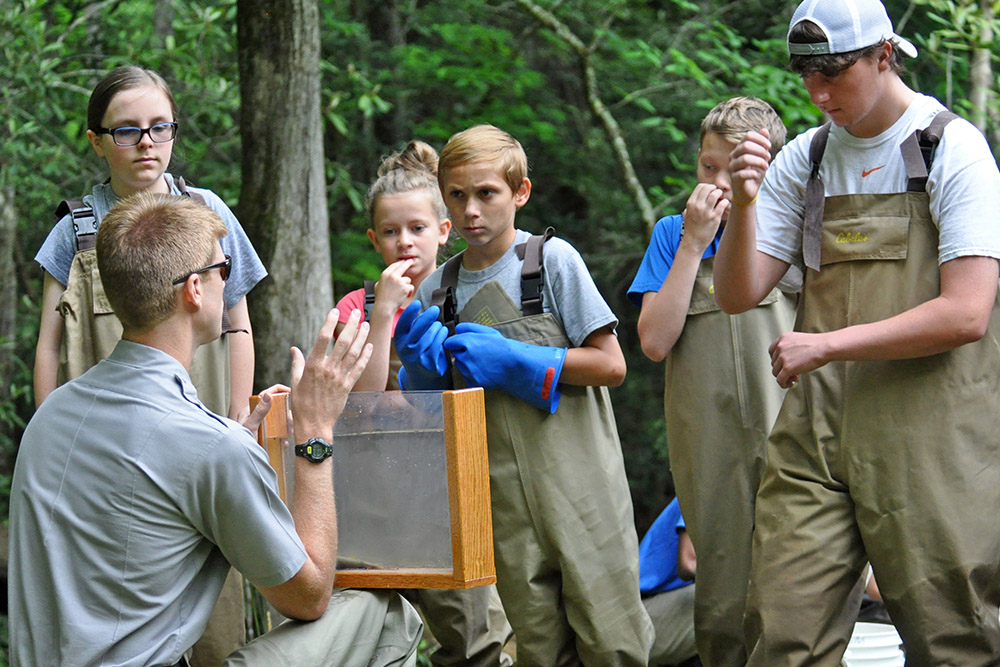 After lunch, courtesy of Full Service Barbecue, we gathered around rangers Nick Melton and Greg Grieco to learn about the park’s main attraction for the 10 million who visit each year: bears. Between 1,600 and 2,000 of them inhabit the park, said Grieco, though they are under no obligation to stay put, he added.

Part of what we learned from the rangers was that bears are essentially lazy opportunists, but that they will travel dozens of miles to return to a place where they found food, such as a relocated bear who returned from Cosby to Chimneys Picnic Area after dining on potato salad there two months earlier. Bears are not stupid, said Grieco, and at least one in the park has a taste for the German philosopher, Frederick Nietzsche, having left tooth marks (and DNA) on a thru-hiker’s volume of The Twilight of Idols and the Anti-Christ.

When Ranger Grieco asked us what we thought the average weight of a bear in the park was, one young man shouted, “One thousand pounds.”

The average female, Grieco said, is around 120 pounds, and males are usually between 150 and 175 pounds, though recently a 400-pounder was caught in Cades Cove, hanging around the campground. The big ones, he said, tend to stay away from campgrounds.

The rangers showed us the dart guns they use to tranquilize nuisance bears who might be raiding campsites or vehicles. They also showed us how they place identification markers (ear tags, tattoos) on bears, hoping that they look back on the experience and think, “I got darted, tattooed and tagged here. I’m not coming back.”

In May, a lean month for bears coming out of hibernation, a man was bitten on the leg by a black bear while in his tent at Spence Field near the Appalachian Trail. He fought the bear off by punching and kicking him through the tent. His tent and backpack were chewed and torn, and his philosophy reading disrupted by the bear, but he was not seriously injured. He did not have food in his tent.

Grieco said that if humans find themselves in a close encounter with a bear, to fight them off with kicks and punches, and do not run or play dead.

One student volunteered to help Grieco demonstrate the culvert trap that is used to capture and transport bears to new locations. The metal cylinder is mounted on a trailer and has a trigger mechanism inside at the far end that rangers bait with sardines. After he shut the metal door on the kid, Grieco announced to us: “Hey everybody that’s our presentation for the day. We’re going to take this one 50 miles away.”

One kid asked how many bears are “put down” each year, and Grieco said that the park averages around two a year. He said he hopes that rangers will put down less and less bears each year, but much of that responsibility resides with visitors.

Students also learned about trail ethics from Maury Hudson, a ridge runner for the Appalachian Trail Conservancy. Hudson, a thru-hiker who has traversed the 2,190-mile Appalachian Trail, taught students the seven principles of “Leave No Trace” and gave them samples of litter to quiz them on biodegradability. Fishing line, for example, will last 500 years, while an aluminum can lasts around a century. Students also learned how to properly “poop” in the woods by digging a hole 6 inches deep at least 100 feet away from the trail, though in some places you have to “pack it out.”

The most important of the seven principles, said Hudson, was “Be Considerate of Others,” an idea that respects the desire of many to find peace and quiet in wild places.

Elise Eustace, communications/development director of the Foothills Land Conservancy, told kids a bit about the history of the park, in particular how much work it took to convert private property into an area for the public to be able to interact with nature. She pointed out that her love of nature led her into the career she’s chosen.

Hatten was not seriously injured in his encounter with a black bear, and Stiver told him he hadn’t done anything wrong, but he knows the importance of understanding animals in the park and making sound decisions in accordance with environmental ethics.

Hatten invited kids from the city and the country, some from as far away as Scott County, and he sees such programs as a way to bring together people with diverse interests in the outdoors, “tree huggers, hunters, country kids, or city slickers.” He hopes that the educational session at Elkmont will plant the seeds to create caretakers, educators, and responsible outdoor enthusiasts.