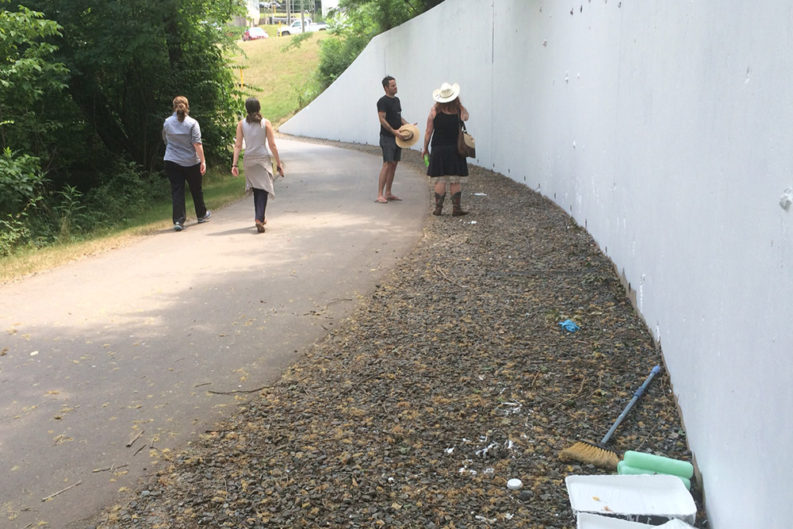 A trio of artists and accompanying volunteers started sweating out an artistic celebration of freshwater diversity this week along the Third Creek Greenway.

Roger Peet, a Portland-based artist associated with the Arizona-based Center for Biological Diversity, arrived in Knoxville on Sunday to begin work on a 175-foot mural that will become a permanent piece of the CBD’s national endangered species mural project.

The multi-hued painting will honor the pink mucket and other endangered and threatened mussels and fishes of the Tennessee River and its tributaries. Priming was completed Monday along the city pedestrian and bicycle path that connects the southern tip of the Cumberland Strip to the University of Tennessee agriculture campus and Fort Loudoun Lake beyond.

It will be the largest mural in the series to date, says the center’s senior scientist Tierra Curry.

“We want to help people realize all of the cool endangered species that live in their neighborhood,” she says.

The pink mucket will be the centerpiece of the installment, but other mussels (the sheep nose and rabbitsfoot), and Tennessee Valley fishes such as the blotchside log perch and citico darter, will also be featured.

“The Tennessee River is a world hotspot for freshwater biological diversity and the Center is working to save the many amazing endangered species that call it home,” according to the center’s description of the mural.

The city of Knoxville provided a $2,500 matching grant toward the mural (agreed to before the Old City mural meltdown that prompted a review of the city’s public arts projects), which will be the latest in a series of nine CBD-sponsored public artworks celebrating regional endangered species across the country. They include murals of a dwindling caribou herd in Sandpoint, Idaho; monarchs in Minneapolis; Arctic grayling in Butte, Mont.; the watercress darter in Birmingham, Ala.; and the gray whale and yellow-billed cuckoos in Los Angeles.

Knoxville Parks and Recreation Director Joe Walsh says the project was reviewed and approved by the Public Arts Committee, and will be a unique addition to the city’s greenway system.

Walsh says the retaining wall—below the Alcoa Highway/Cumberland Avenue exit ramp across the creek from University Commons shopping center—has been little more than “a target for graffiti for a long time.” Its location by the creek—a chronically polluted urban waterway that has long been the subject of scientific attention and community cleanups—will serve to “brighten up the area.”

There are other pieces of public art along the greenway, but this is the first such mural, Walsh says. “This is something unique, and hopefully it will catch on.”

Peet, who is also a printmaker and member of the Pittsburgh-based arts cooperative Justseeds, was joined Monday by artists Merrilee Challiss, of Birmingham, Ala., and Trish Tripp, of Asheville, N.C. for final priming and reconnaissance. The three are contracted by the CBD.

“It’s definitely the biggest one in the project,” Peet says on a lunch break Monday—not quite “as simple and forgiving,” as other projects. This is the eighth such mural he has done, all of which convey either an ecological or social justice theme.

He says his work not only highlights specific concerns—in this case the plight facing freshwater mussels and the fishes that often live symbiotically with them—it also conveys a message of solidarity.

“It reminds people they have allies, and there are other people (who) think like they do,” Peet says.

He adds that this mural’s “subject matter is totally appropriate to the creek right there.” Indeed, the area bustled with life one recent warm spring morning. Fish broke the waters of the creek, kingfisher chattered and undulated down the waterway, and a family of geese walked through dewy clover on the fringe of the heavily used greenway.

Chris Irwin, a Knoxville attorney, environmentalist and civil rights activist, has been cleaning and sandblasting—with the help of other volunteers—the giant retaining wall at the downstream side of the Tyson Park rugby field for several weeks. He is hosting Peet.

“It’s a great deal for Knoxville,” says Irwin, who was approached by CBD to serve as the project’s local point man.

Curry says the mural will be painted via a sort of “paint by numbers” system that will allow community groups and individuals to easily participate. Peet says the goal is to complete the artwork by June 28.

A celebration marking the mural’s completion is planned for July 10 at Tyson Park, according to Curry. Representatives of Conservation Fisheries Inc., Tennessee Clean Water Network, and the Harvey Broome Chapter of the Sierra Club, all of which have assisted with the project, will also be present. Curry says Gerry Dinkins, curator of the UT McClung Museum of Natural History and Culture mussel collection, has also contributed his expertise.

The pink mucket is a federally listed endangered species that has seen its Ohio and Tennessee rivers basin range dramatically reduced by the creation of reservoirs such as Fort Loudoun Lake and other Tennessee Valley Authority impoundments. It relies on fish for larval reproduction, and is susceptible to fluctuations in some fish populations as well as sediment pollution.

But it is guaranteed to live on in Knoxville—in art, anyway.

“I think it’s going to be beautiful,” Irwin says. “We need more beauty in this world.”

Curry says Irwin has served as the project’s “force of nature,” shepherding the concept onto concrete. When complete, the mural will convey a dire message with artistic subtlety, Curry says: “We are in the middle of an extinction crisis and people aren’t even aware of it.”

Featured Photo: Two pedestrians pass on the Third Creek Greenway as muralist Roger Peet confers with Asheville-based artist Trish Tripp at the site of the planned Center for Biological Diversity mural that will serve as a celebration of the endangered and threatened mussels and fishes of the Tennessee Valley. Photo by Thomas Fraser.