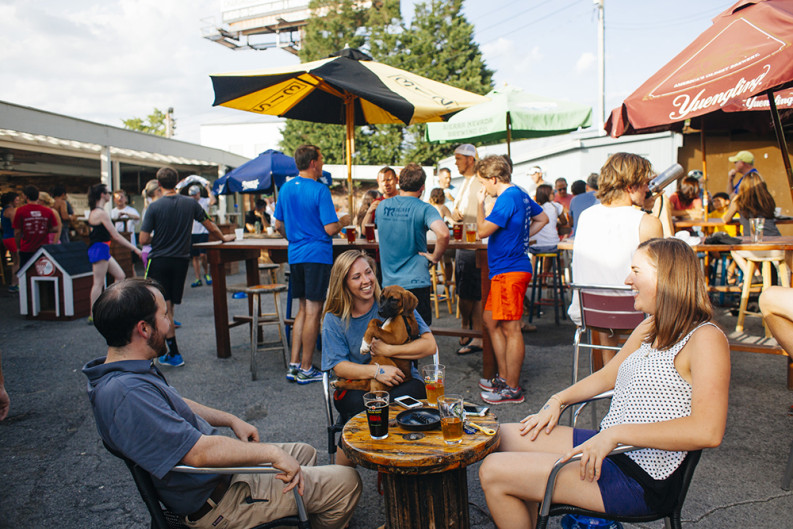 UPDATE: A public meeting about the new Bearden mixed-use zoning plan will be held Tuesday from 6 to 7:30 p.m. at the Bearden United Methodist Church gym. The Metropolitan Planning Commission will provide an overview of comments received to-date, answer questions about how the proposed zoning applies to renovations and additions to existing development, and ask for your feedback on the preliminary zoning map.
The current draft of the proposed Mixed Use District zone is available on the MPC website:  http://www.knoxmpc.org/mixed-use/bearden.

A good deal of confusion became apparent last week about what the new Bearden mixed-use neighborhood zoning plan might mean to existing businesses. Tonight provides an opportunity for the public to stroll Bearden with government officials and pose questions and share thoughts about efforts to encourage biking and walking in the neighborhood, at the first of Bike Walk Knoxville’s “summer tours.”

The non-profit Bike Walk Knoxville previously held annual “ride with elected officials” events, but those proved so popular that they are adding more meetups and, for the first time, offering a walking version. Residents can gather at the Bearden Beer Market at 6 p.m. for a mile-and-a-quarter meander – and, if desired, a pint to cool off afterward. (The beer market is donating $1 of the cost of each pint to Bike Walk Knoxville, says the organization’s president, Caroline Cooley.)

Bearden is already one of the only suburban areas of Knoxville that invites walking and closely connects residential and commercial areas through sidewalks and greenways. But at the request of Knoxville City Council, the Metropolitan Planning Commission proposed a new zoning structure to enhance the neighborhood’s pedestrian access and build its sense of community, both goals identified 15 years ago during a public process that resulted in the (somewhat neglected) Bearden Village Opportunities Plan.

Last week the owner and manager at the Bearden Beer Market found themselves publicly at odds over whether the move will benefit the popular watering hole, although owner Chris Morton told the News Sentinel he’s all for it. At issue was whether the mixed-use designation would affect the market’s operating hours.

MPC senior planner Mike Reynolds, who is managing the Bearden rezoning project, says that would be unlikely. As proposed, the neighborhood plan would include three levels of mixed-use zoning, and limited operating hours would affect only one category: A residential mixed-use allowing “neighborhood corner”-type commercial activity, similar to the Sequoyah Hills Office Plaza area where the Plaid Apron restaurant is surrounded by houses and apartments. Reynolds says this designation might come into play in areas on the fringes of residential neighborhoods along Sutherland Avenue, but it might not be needed at all.

The hoopla did highlight the scores of details that must be ironed out before the plan, which is widely supported in concept, can be put to work.

For example, Reynolds says one of the biggest concerns he has heard is what requirements the code would trigger when existing commercial buildings are renovated. For example, would additional parking have to be added at the same time? Would building additions have to be in front, to bring the structure closer to the road? And how would setbacks and landscaping requirements affect buildings on the many triangular and funky-shaped lots on Homberg Drive?

“We’re still working that out,” Reynolds says. “We just need to make it so it’s functional and doesn’t hinder reuse of existing buildings.”

Reynolds says he hopes to hold several public meetings before the MPC’s August meeting, at which it is scheduled to vote on the rezoning package, including one scheduled for 6 p.m. June 28 at Bearden United Methodist Church.

Those meetings will likely offer more answers for the public than the walking tour tonight. Reynolds says no one from MPC can be there, and neither Mayor Madeline Rogero nor her chief policy officer plan to attend, either. But Bike Walk Knoxville president Caroline Cooley says at least three city council members are expected, and probably more. And the zoning plan will go before City Council for approval after it passes muster with MPC.

Bike Walk Knoxville plans to offer further opportunities to explore other Knoxville neighborhoods this summer. Participants can experience areas of town with excellent bikeable and walkable infrastructure, as well as areas that need improvement. Past rides with elected officials have attracted as many as 200 participants, Cooley says. Here are your chances to join the throng.