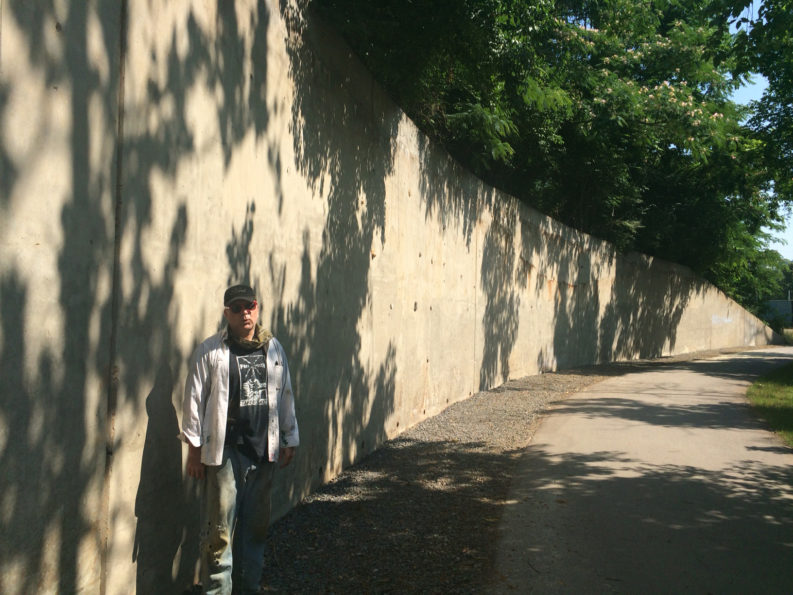 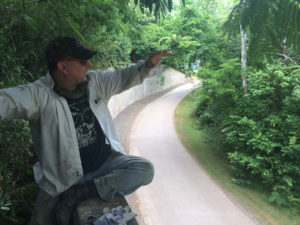 A buffalo carp broke the befouled waters of Third Creek last week just before a kingfisher chattered its undulating way down the waterway. Goslings, closely guarded by a gander, moved into the dewy clover fringing the city pedestrian and bicycle path that connects the southern tip of the Cumberland Strip to the University of Tennessee agriculture campus and the Tennessee River beyond.

Chris Irwin, a Knoxville attorney, environmentalist, and civil rights activist, took a break from his labors and watched bemusedly from the base of a bare, gray concrete wall that abuts the Third Creek Greenway. Irwin has come to know the gaggle of Canada geese well. He’s been cleaning and sandblasting—with the help of other volunteers—the giant retaining wall at the downstream side of the Tyson Park rugby field for several weeks.

While some wildlife—native and non-native—is still well with us, Irwin is working on a project to honor the creatures we may soon be without. In this case, the pink mucket and other endangered and threatened mussels and fishes of the Tennessee River and its tributaries.

Roger Peet, a Portland-based artist associated with the Arizona-based Center for Biological Diversity, is set to arrive in Knoxville next week to begin work on a 175-foot mural that will become a permanent piece of the CBD’s national endangered species mural project.

It will be the largest mural in the series to date, says center senior scientist Tierra Curry.

“We want to help people realize all of the cool endangered species that live in their neighborhood,” she says.

The pink mucket will be the centerpiece of the installment, but other mussels (the sheep nose and rabbitsfoot), and Tennessee Valley fishes such as the blotchside log perch and citico darter, will also be featured.

“The Tennessee River is a world hotspot for freshwater biological diversity and the Center is working to save the many amazing endangered species that call it home,” according to the center’s description of the mural.

The city of Knoxville has provided a $2,500 matching grant—agreed to before the Old City mural meltdown that’s prompted a review of the city’s public arts projects—toward the mural, which will be the latest in a series of nine CBD-sponsored public artworks celebrating regional endangered species across the country. They include murals of a dwindling caribou herd in Sandpoint, Idaho; monarchs in Minneapolis; Arctic grayling in Butte, Mont.; the watercress darter in Birmingham, Ala.; and the gray whale and yellow-billed cuckoos in Los Angeles.

Knoxville Parks and Recreation Director Joe Walsh says the project was reviewed and approved by the Public Arts Committee, and will be a unique addition to the city’s greenway system.

Walsh says the retaining wall—below the Alcoa Highway/Cumberland Avenue exit ramp across the creek from University Commons shopping center—has been little more than “a target for graffiti for a long time.” Its location by the creek—a chronically polluted urban waterway that has long been the subject of scientific attention and community cleanups—will serve to “brighten up the area.”

There are other pieces of public art along the greenway, but this is the first such mural, Walsh says. “This is something unique, and hopefully it will catch on.”

Irwin will host Peet, who is expected to arrive in town on Sunday. Irwin and other volunteers plan to prime the wall this weekend, and will assist Peet as he paints.

Curry says the mural will be painted via a sort of “paint by numbers” system that will allow community groups and individuals to easily participate.

A celebration of the mural’s completion is planned for July 10 at Tyson Park, according to Curry. Representatives of Conservation Fisheries Inc., Tennessee Clean Water Network, and the Harvey Broome Chapter of the Sierra Club, all of which have assisted with the project, will also be present. Curry says Gerry Dinkins, curator of the UT McClung Museum of Natural History and Culture mussel collection, has also loaned expertise to the project.

The pink mucket is a federally listed endangered species that has seen its Ohio and Tennessee rivers basin range dramatically reduced by the creation of reservoirs such as Fort Loudon Lake and other Tennessee Valley Authority impoundments. It relies on fish for larval reproduction, and is susceptible to fluctuations in some fish populations as well as sediment pollution.

But it is guaranteed to live on in Knoxville—in art, anyway.

“I think it’s going to be beautiful,” says Irwin, who was approached by the CBD to serve as the local point man for the project. “We need more beauty in this world.”

Curry says Irwin has served as the project’s “force of nature,” shepherding the concept onto concrete. When complete, the mural will convey a dire message with artistic subtlety, Curry says: “We are in the middle of an extinction crisis and people aren’t even aware of it.”