An Inside Look at nief-norf, the Most Important Knoxville Music Fest You've Never Heard Of - The Knoxville Mercury 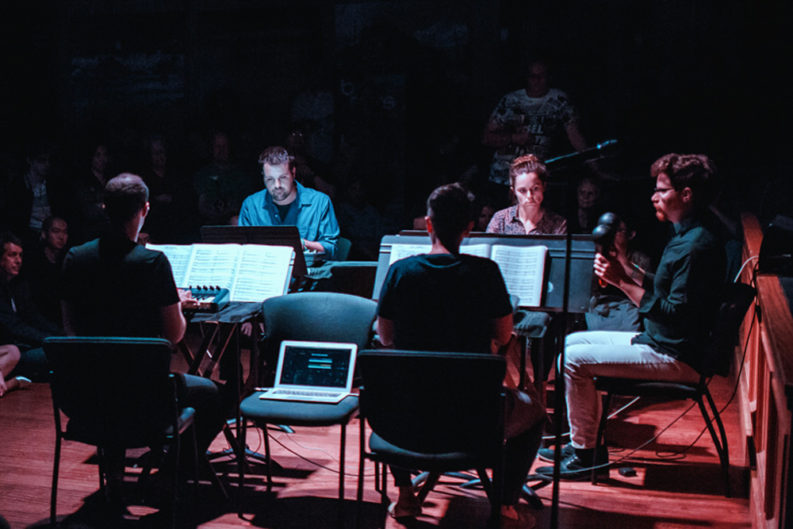 For a schedule of events, see: Astro-Bio-Geo-Physical: What to Expect at the nief-norf Summer Festival

This week, dozens of musicians, scholars, and composers from around the country have gathered in Knoxville for the nief-norf Summer Festival. For the next 10 days, in intensive workshops and seminars and in a series of eight concerts, they’ll turn the city into a cutting-edge laboratory for 21st-century avant-garde and experimental music.

Some of the music you’ll hear at nnSF will sound strange. Some will be abrasive or confrontational. Some will be beautiful, or even transcendent. Some of it might not sound like music at all. For many listeners, it will challenge deeply held assumptions about what music is and what it means. (One piece that will be performed loops sounds recorded from outer space and the inside of a pine tree.)

nnSF is the brain child of Andy Bliss, who is now the head of percussion studies at the University of Tennessee, and his colleague Kerry O’Brien, a musician and researcher now based in Seattle, Wash. They’ve held the festival every year since 2011; this is the second year it’s been held in Knoxville.

Here, Bliss says, nnSF has flourished and evolved. With UT’s state-of-the-art music facilities and the city’s network of world-class music venues, Bliss and his colleagues have seen the festival develop into an internationally significant music event that gives Knoxville a global profile as an incubator of new music. In turn, Knoxville—with adventurous and curious audiences and an abundance of performance spaces—have opened up new possibilities for the festival, allowing an academic conference to grow into a public showcase for the best of contemporary music. 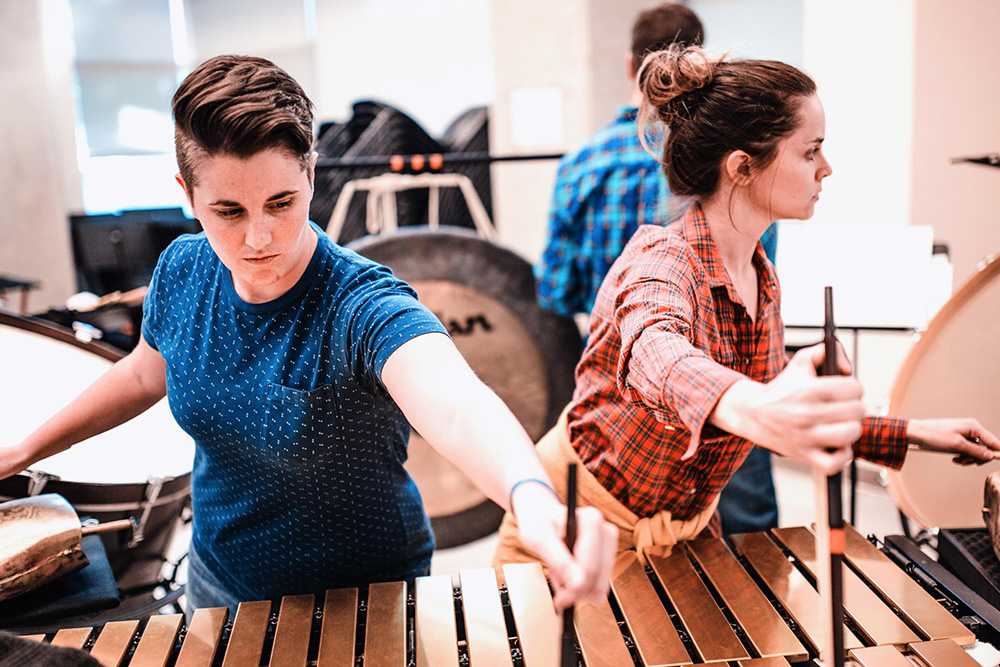 Bliss and O’Brien founded nief-norf as a performance ensemble to showcase the “challenging and boundary-pushing repertoire” of 20th- and 21st-century classical music in 2005, when they were graduate students together at Northern Illinois University. In 2011, they established the festival, bringing together students, scholars, and composers to share their perspectives on new music. The first four festivals were held at Furman University, in South Carolina; last year, nnSF followed Bliss to Knoxville, where he has been since the fall of 2011.

“The term ‘nief-norf’ came from some older graduate students who liked to call any
experimental or strange music ‘nief-norf.’ It’s meant as onomatopoeia for strange sounds, like ‘bleep-blop.’ Andy and I bonded over the fact that we secretly loved the music that these grad students were deriding. Although nief-norf was born as a derogatory term, we flipped it and created a group that specializes in this kind of experimental music.”
—Kerry O’Brien, nief-norf co-founder and research director

“I would meet one student at a small or mid-size university who would come up and ask me questions about Morton Feldman or Stockhausen or these 20th-century composers. These composers weren’t being taught at their school, but they were starting to get hip to them. And I thought, what would happen if I got that kid and this other kid I just met together at a summer festival format?”
—Andy Bliss, nief-norf co-founder and artistic director

“It’s a labor of love to produce these things, and it requires a lot of energy, energy that not everyone can afford to expend on such an endeavor. I am amazed at what Andy and his co-organizers have done with nief-norf. They consistently produce innovative and excellent programs, and rally the most talented people to the festival. nief-norf is now a community.”
—Matthew Burtner, 2012 nnSF composition fellow

“There are a couple of motivations. One is to create opportunities that would not otherwise exist for this music to be performed to the general public. Another motivation is to work with really, really bright students from all over the country and see if getting together like this might provide a spark that helps them see different possibilities in their career—what might be possible.”
—Andy Bliss 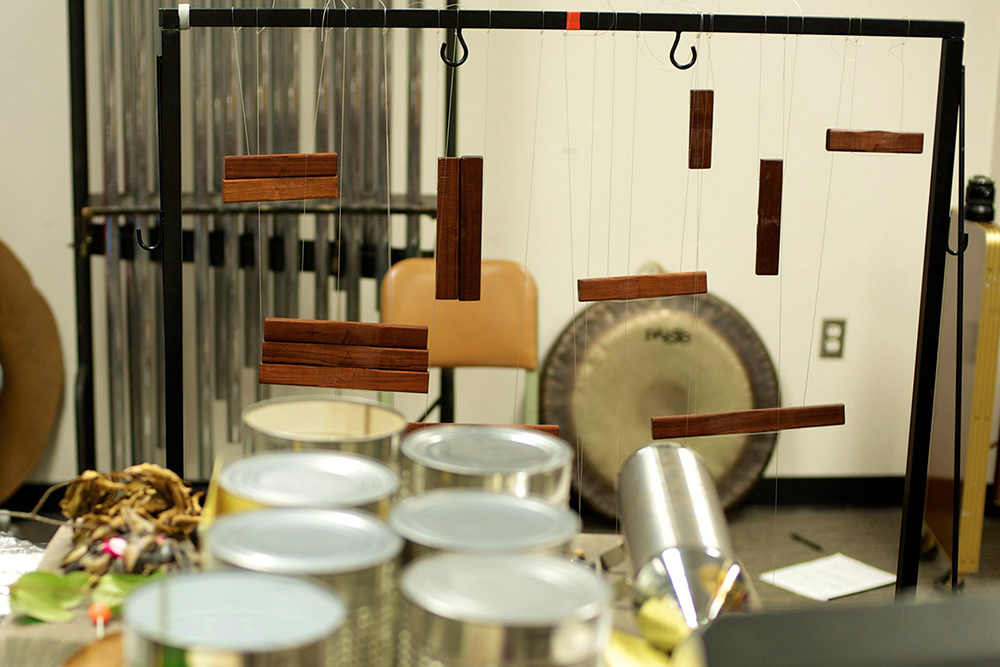 Contemporary music is often stereotyped as random noise or deliberately obscure; while music like that can be heard at nnSF, there’s a variety of modern music on the program, and much of it is accessible and traditionally appealing.

“I’ve tried to work on programming that gives people a taste of just how wide contemporary classical music is. To a curious audience member, there will be something for almost everyone at all of our concerts, I think. … We have this piece by Ricardo Zohn-Muldoon that we’re playing this year—it is breathtakingly beautiful, with a soprano and a sextet of chamber musicians. I have a hard time thinking that the average classical-music lover would not just adore this piece.”
—Andy Bliss

“I always tell people to not force the music to be beautiful. People listen to classical music always expecting to hear something beautiful. If something is cool and kind of gross, let it be cool and kind of gross. … I encourage people to let the music speak for itself. If it didn’t sound beautiful, it probably wasn’t trying to sound beautiful. Those things that make you raise your eyebrows and say ‘That was really cool, that was really interesting, I’ve never heard anything like that before,’ that’s the most interesting thing about it.”
—David Floyd, nnSF 2016 performance fellow

“Contemporary music is not all angular and squeaky and weird. We do explore those sound worlds sometimes, and where I find real beauty is where those worlds intersect with the more melodic tonal music that our ears are more accustomed to. Wilco does that all the time, and they sold out the Tennessee Theatre the last time they were here—they play tunes that are folk-like and gorgeous and then there’s a moment where the guitars are playing loud and there’s pretty much white noise. That contrast can be really stunning and really effective. Classical music’s not that different. The music we’re programming, it’s swimming around and exploring the combinations of these different filters and sounds and ways of putting these things together.”
—Andy Bliss

“The experience of taking these things that are not part of the canon yet, or they are part of the new canon that doesn’t get represented very much, it was so enriching for me.”
—David Floyd 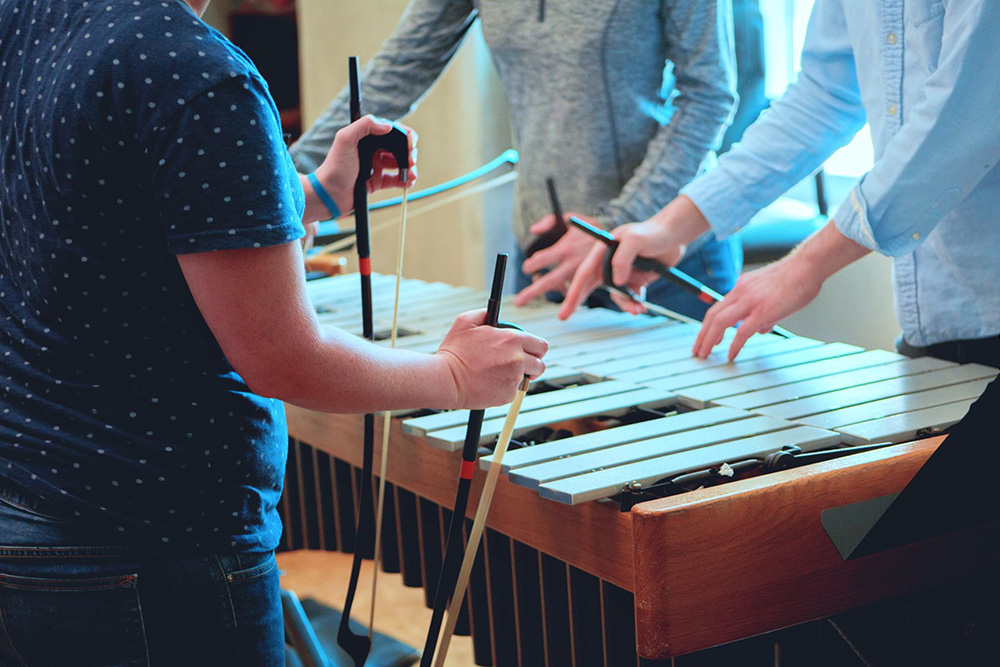 The festival brings together working composers, music scholars, and students for workshops, rehearsals, and a series of concerts open to the public. The concerts feature major works from the 20th century (this year, pieces by the legendary European composers Iannis Xenakis and Pierre Boulez), recent music from celebrity composers like John Luther Adams, Caroline Shaw, and David Lang, and pieces by the composers at the festival.

“Performers and composers bring different kinds of knowledge to the table. It’s one thing for a scholar to study a musical score or a recording, but it’s quite another thing to become familiar with music through performance or composition—to compose the music, to embody it through performance, to have it percolating in your mind and body. This can lead to intimate kinds of musical knowledge. This isn’t better or worse knowledge than scholarly types of knowledge, just different. Performers and composers have different priorities and experiences, and this affords them unique perspectives.”
—Kerry O’Brien

“Really well-established awards are not my compass when it comes to artistic direction, but it is worth noting that the people we program at nief-norf are winning Grammys and Pulitzer Prizes. These are things the classical world is recognizing as today’s version of greatness. For example, I’d been collaborating with John Luther Adams for about eight years in 2014, when he was coming to Knoxville—we were doing Inuksuit at Ijams. And a week before he came he won the Pulitzer Prize, and then suddenly people became very interested in what we were doing.”
—Andy Bliss

“I was invited to the first festival as a guest composer and two of my compositions were performed. Having the composer present to interact with the performers as they learned the piece was an especially valuable experience for the performers, and so from this grew the idea of having composers be a regular part of the festival. … For performers, the interaction with composers brings the music to life and reminds them that ours is a living tradition—something easy to forget when learning music solely from notes on a page.”
—Christopher Adler, composer in residence at nnSF 2011 and now the festival’s composition workshop director 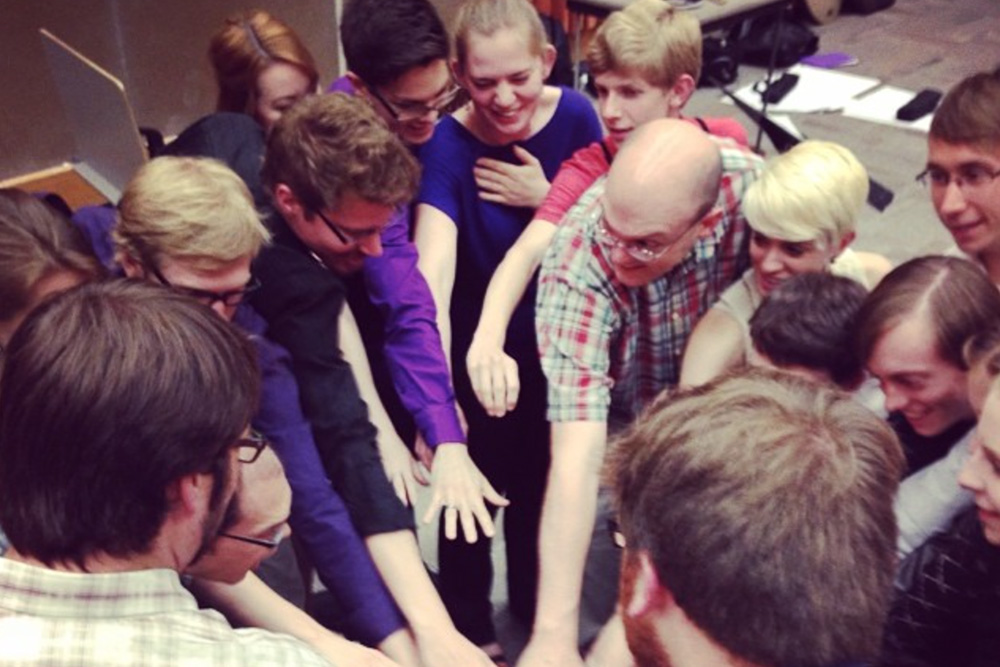 During the day, with students and faculty laboring over the intricacies of the music they’ll be performing, the nief-norf Summer Festival can have a monastic sensibility. But Bliss and his colleagues are dedicated to sharing that sensibility with the community at large. Knoxville audiences benefit from the fact that the festival is here. But part of the reason the festival succeeds here is that Knoxville allows it to be what it is.

“It’s added a whole new dimension to the festival by having it here. It took us a couple of years to figure out what the thing was and what we were doing and what we wanted to do. But now that we’re here, it’s clear to us that it’s critically important that we’re out in the community of Knoxville. We could not do this without the University of Tennessee, period—we need the music building for practical day-to-day reasons. But without the creative music-making outlets of downtown Knoxville, I think it would have a much more vanilla or static, dry feeling to it.”
—Andy Bliss

“There are many festivals around the country, but nief-norf is unique in its intensity, stylistic diversity, high level of achievement, and the thorough integration of scholarly experience into the festival context. I don’t think there’s anything else quite like it in the U.S. I would be ecstatic if there were something like this in my hometown of San Diego, because it is such a great window into contemporary music-making around the world.”
—Christopher Adler

“Some of this music really works best in the UT recital hall, which is an acoustically beautiful space—there’s not going to be sound distraction, and you can really focus on the intricacies of what the composer was trying to get at. But then other pieces are best heard while walking around the space with a beer in your hand.”
—Andy Bliss

“Such festivals push the boundaries of musical thought and design, and they can do this in a manner that would not be possible in a larger city. We expect innovative and high-quality festivals in San Francisco or Chicago. But festivals such as nief-norf … can risk pushing the envelope much further. Such festivals become the proving ground for larger cultural venues. You’ll hear it first in Greeneville or Charlottesville, and then in New York City or Los Angeles. … I consider Andy among the most important producers in the country because he can make these great ideas come to life as performance in America.”
—Matthew Burtner

“I think Knoxville is ready to have a forward-pushing contemporary chamber-music ensemble in town regularly. That’s one of the things that we’re very interested in providing for the community—opportunities to hear these incredible pieces that are an extension of the repertoire that people would otherwise have access to.”
—Andy Bliss

“It always makes me think about the riot at the theater when Stravinsky’s Rite of Spring premiered. All those people were there and they wouldn’t let the music be ugly. They wouldn’t let it be aggressive and sharp. They were so angry that it wasn’t what they expected. The other side of the coin is that people think they’re not smart enough to enjoy it or the music’s too complicated.

“Sometimes there’s not anything to get. Just let the music be and be there in the moment with it.”
—David Floyd