Astro-Bio-Geo-Physical: What to Expect at the nief-norf Summer Festival - The Knoxville Mercury 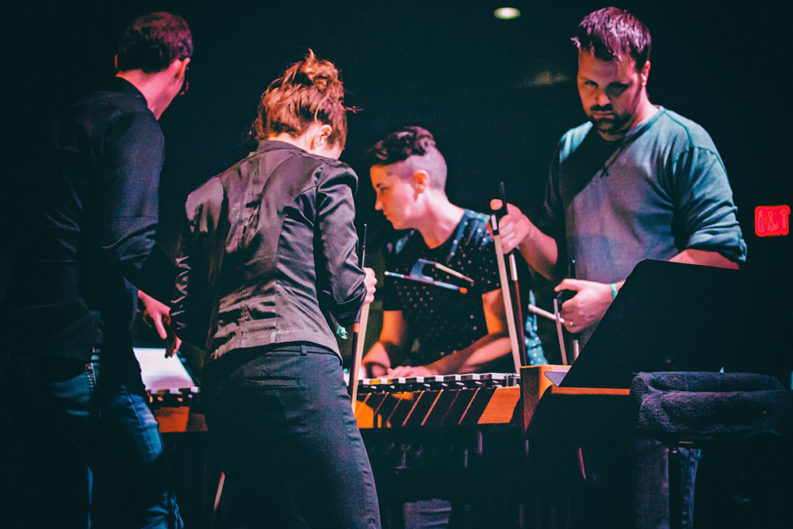 Here’s what you can experience at the 2016 nief-norf Summer Festival.

Weekend passes are available for $50. Visit niefnorf.org for more information.

Natalie L. Haslam Music Center • Friday, June 10 • 7:30 p.m. • $10/$15 at the door
The theme for the 2016 nief-norf Summer Festival is “astro-bio-geo-physical music”—“music that plugs into astrophysical, biophysical, or geophysical sources,” says nnSF co-founder and research director Kerry O’Brien. “In some cases, this is just amplifying sounds we can already hear but don’t pay much attention to, like human breath or the sounds of ambient wind.” This can take the form of something like 2016 Big Ears composer-in-residence John Luther Adams’ large-scale pieces of “sonic geography,” inspired by the vast Alaskan landscape, or the wide-ranging experimental music of Annea Lockwood, who combines found sound, nontraditional instruments, electronic music, and performance art. Music by both Adams and Lockwood as well as Tonia Ko, Matthew Burtner, and Donnacha Dennehy will appear on the program.

Ijams Nature Center • Saturday, June 11 • 5:30 p.m. • Free, but a $10 donation is suggested
This outdoor installation/concert combo—an echo of nief-norf’s performance of John Luther Adams’ Inuksuit at Ijams in 2014 and again as part of this year’s Big Ears festival—is something of a centerpiece for this year’s nnSF, showcasing the ensemble’s percussion-centric repertoire and this year’s astro-bio-geo-physical music theme. The program starts with Wild Energy, a 50-minute installation created by Annea Lockwood and Bob Bielicki that presents sounds from the natural world—trees, outer space, whales, and geologic forces—that are normally inaudible to human ears, sped up or slowed down so we can hear them.
That’s followed by Pléïades, a 1978 composition for six percussionists by the Greek composer Iannis Xenakis, one of the seminal figures in 20th-century music. Pléïades features vibraphones, marimbas, xylophones, xylorimbas, bongos, tom-toms, drums, and the sixxen, a microtuned metal keyboard built especially for this piece.

Natalie L. Haslam Music Center • Tuesday, June 14 • 7:30 p.m. • $10/$15 at the door
One of Xenakis’ most celebrated peers during the second half of the 20th century was the French composer and conductor Pierre Boulez, who died in  January at the age of 90. Boulez was, in fact, one of the most important figures in the music world in the last 100 years; as both a composer and an interpreter, he demonstrated formidable intelligence and clarity in a career that spanned almost 70 years.
“Cool, brutal, elegant, fiery, he established a kind of International Style in music, and propagated it in polemical writings and through institutional networks,” The New Yorker’s Alex Ross wrote in a column after Boulez’s death. “As a conductor, he was an exacting, absorbing interpreter of the advanced styles he favored. His death marks the end of an epoch.”
Also: music by New York composer Judd Greenstein, one of the leaders of the “indie classical” movement, and two pieces from the nnSF 2016 call for scores.

Same Is Not the Same

The Emporium Center • Wednesday, June 15 • 7:30 p.m. • $10/$15 at the door
Michael Gordon represents a bridge between the minimalists of the 1970s and the bright young 21st-century composers. He’s also one of the artistic directors of the Bang on a Can Festival. He’s written chamber music, large orchestral pieces, vocal music, pieces for electric guitar, and operas and collaborated with musicians, composers, filmmakers, artists, and ensembles from around the world.
Kate Soper is one of those bright young 21st-century composers—and a terrific soprano, too. She writes and performs absorbing but challenging chamber and vocal music, most recently Voices From the Killing Jar, a stark, witty feminist operatic song cycle from 2014.
Also: music by the prolific Italian composer Salvatore Sciarrino and a piece from the nnSF call for scores.

Music of a Place

The Square Room • Thursday, June 16 • 7:30 p.m. • $10/$15 at the door
In 2014, the year John Luther Adams won a Pulitzer Prize just a week before coming to Knoxville for nief-norf’s outdoor performance of his Inuksuit, Christopher Cerrone was one of the finalists Adams beat out for the award. Cerrone, then just 30 years old, was nominated for Invisible Cities, an opera based on Italo Calvino’s novel of the same title that The Los Angeles Times called “startlingly ambitious.” (The original production was staged in an L.A. train station, with performers and audience members—who listened to the music transmitted live over headphones—mingling and mixing together, creating “an existential confusion between reality and unreality.”)
Also: music from Michael Gordon, the 12-tone composer Charles Wuorinen, and a piece by the Mexican-American composer Ricardo Zohn-Muldoon that nnSF artistic director Andy Bliss describes as “breathtakingly beautiful.”

Natalie L. Haslam Music Center •  Friday, June 17 • 7:30 p.m. • $10/$15 at the door
For the participants, nnSF is not a vacation—the performing fellows rehearse and, of course, perform, and the 10 composition fellows are expected to write a piece of music that will premiere at this concert. The work at the fellowship premier concert won’t be as polished as what’s on the other programs, but it provides an important insight into the heart of the festival.

Jackson Terminal (213 W. Jackson Ave.) • Sunday, June 19 • 3 p.m. • $20/$30 at the door
nnSF concludes with a six-hour marathon of music by Xenakis, the cerebral Italian composer Luciano Berio, the installation artist/composer Ashley Fure, violinist/singer/composer/Kanye West collaborator/Pulitzer winner Caroline Shaw, postminimalist composer Marc Mellits, iconoclastic Dutch composer Louis Andriessen, nnSF call-for-scores winner Nicole Murphy, and more.
“The idea behind a marathon concert is that you can’t possibly sit through all of it. You just can’t,” Bliss says. “So often after a classical concert, people will go out and say, well, I like the first piece but I didn’t like the second and the third one was my favorite. There has to be a winner and a loser over dinner afterward. With a marathon concert, the conversation changes because of the listening situation. You just take it in like a day at the theme park—you maybe didn’t ride everything but it doesn’t matter because you still had a good time.”