Backstory: A Day with James Gilman* - The Knoxville Mercury 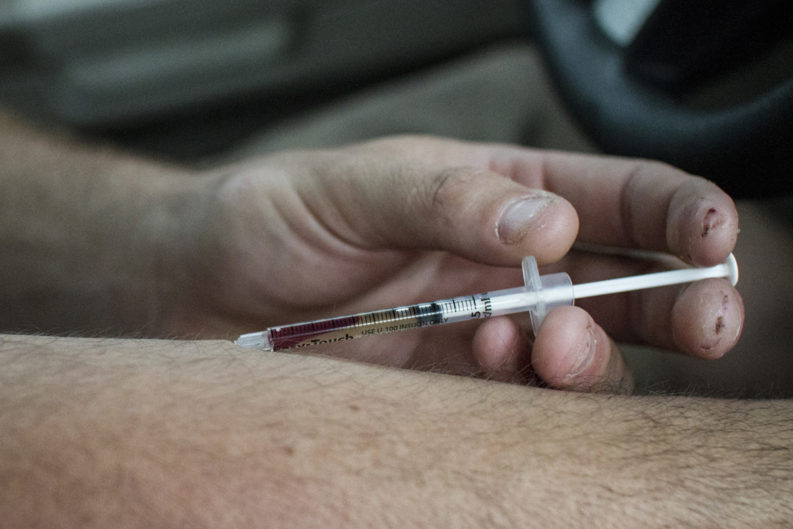 When James Gilman* picked me up in a North Knoxville parking lot, the first thing he offered up was a warning: “Are you ready for this?! Are you sure?”

Now I understand why. Gilman (not this guy’s real name, for obvious reasons) is living a life on the edge, or a life that’s probably far over the edge by many people’s standards. As I detailed in this week’s cover story, Gilman is addicted to heroin. He often steals to fund his addiction. He doesn’t like stealing, he says, but at the end of the day he has no qualms about ripping something off if it means he can afford another hit. Even just one. Even if it’s killing him and wrecking his life, yet again.

He’s stuck in a vicious cycle, one where he craves the high but, in the same breath, says he desperately wants a change. He feels powerless to stop it. He can’t bring himself to address his addiction head-on, a fact he mostly attributes to pride. He spent the past year clean and sober, until March when he relapsed after a major surgery forced him onto morphine and then Percocet for pain management. To show back up at recovery now would be to admit defeat. He expects to return there sometime to face those demons, but he very well may end up dead or in jail before he has the chance.

“People really don’t understand. When I get stuck [in this cycle], I’m just stuck. I’m so worried about going through detox that might not be a medical detox, and I really just want to call my probation officer to see what’s going on [if I have a warrant out for my arrest], but I’m scared,” he says. “I really have a lot of support, but it’s hard going back in there after a year clean and admitting that I fucked up. I’ve been wanting to, for the past two weeks I’ve been wanting to ask for help, but my pride’s got in the way.”

He says he’s agreed to talk with me—some random reporter connected through a mutual acquaintance—and to show me how he’s living because he thinks it might help others facing similar issues, or help people better understand what he and others are going through. He’s blunt. He’s candid. He spoke with me on the condition that I not publish anything that could get him in trouble. He did not say flat-out that we couldn’t publish his name, but after spending a few hours with him (and witnessing multiple felonies) I knew we would have to withhold his real name to make good on our promise. The goal was to offer a glimpse into his life, into a drug culture often impenetrable for those on the outside, not caught in its winding spire. This arrangement allowed us to get at those gritty details without compromising anyone’s integrity.

As a reporter, these types of stories are hard to tackle. Logistically it can be hard to track down someone like Gilman who is willing to talk. It’s even harder to find someone willing to talk honestly, and that’s always a concern when relying on an anonymous source. They have no stake in telling the truth, nothing to lose if we publish fallacies. (I did not tell Gilman we’d be withholding his name until after our encounter.) But that’s not really what I mean when I say these stories are hard. The hardest part is the humanity of it all.  I can relate to Gilman. I even like the guy. He’s about my same age, from a working-class background, facing many of the same life struggles, thoughts, feelings, and emotions we all deal with. He’s relatable. In that I see some of myself, but also the faces of close friends that have lost their own battle with substance abuse, mostly all fighting addictions to prescription opiates or heroin.

When health officials throw out statistics about the scope of “the opiate epidemic,” it’s easy to dismiss the numbers on a page and not see the faces. But this really is a scourge that keeps claiming lives, wrecking futures and families, and takes a toll on our entire social service system, draining tax dollars. I’m of a generation that has had a front-row seat to it all, starting in early high school. The pills were there. From my perspective, they pretty much always have been, though looking back it was a trend that happened to catch on just as my generation was coming of age.

A lot of the people I knew back then—all of us kids at the time—never really saw the dangers in it. I can’t say I was above it all, either. A few bad decisions too many and I could have very well ended in Gilman’s seat, giving an interview to a reporter for a story like this. If there’s one thing I learned from reporting on this story, it’s that addiction knows no bounds, no social class, gender, or race. It could happen to you or your family members, too, believe it or not.

Saying goodbye and leaving Gilman in his current situation was probably the hardest part. Hell, it still is. He’s out there right now likely doing the same sort of shit he brought me along for. Could I help? Should I? Sure, a grocery store may have some meat stolen, but more importantly there is someone’s life on the line. There are ethics to journalism, and for good reason, but at the end of the day we’re all human. I have seen three childhood friends die from opiate overdoses, two others that were killed in drug-related crashes, and about a half-dozen more currently caught up in the justice system for criminal acts related to their drug use. Is there a chance for Gilman not to end up becoming another statistic?

My personal perspective on this played out in Northwest Georgia, where I grew up, just west of Atlanta, in an area that has not been hit as hard by opiates as East Tennessee. If you think this is not happening in your own backyard, to friends and even family members, it’s time to open your eyes.

Read the full story: On the Front Lines of Knoxville’s Battle Against Opiate Addiction

*James Gilman is an alias. Some details have been changed to protect his identity.