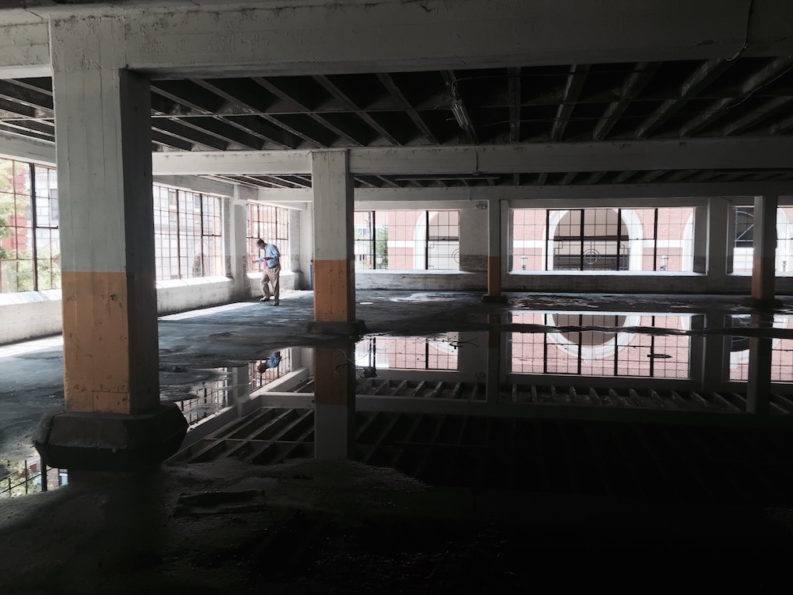 The historic Pryor Brown garage, close to demolition a few years ago, is now slated for redevelopment into three floors of apartments over ground-level storefronts, developers and city leaders announced Thursday.

At a press conference at the 1925 garage, developer Rick Dover announced his plans for a $9 million investment to turn the upper levels of the garage into 30 residential units that will be packaged with interior parking, basement storage, and a rooftop patio, while the old storefront space facing Market and Church streets will be recreated. Dover says he’d like to see professionals like opticians in the commercial space, which won’t include bars or restaurants. The facade of the 76,000-square-foot garage will be preserved as much as possible. Dover says he will pursue a historic overlay for the building that will ensure its long-term preservation.

The four-and-half-story structure, located at the site of a livery stable of the same name, was built by expert horseman and transportation maverick Pryor Brown (1849?-1936) and is believed to be one of the oldest parking decks in the country. The deck was an early example of mixed-use development because it also housed retail businesses, whose storefronts are still visible.

The building is owned by the Conley family, which will remain co-owners with Dover. Kim Trent, executive director of Knox Heritage, helped property manager Kelly Conley and Dover to work out the deal. Dover called Trent “a good dating service” and praised city and county leaders, saying he’s never worked in a “more sophisticated, intelligent and progressive” place.

The project is dependent on the approval of a 30-year tax increment financing (TIF) agreement estimated at $2.7 million, which will have to be approved by Knoxville City Council and Knox County Commission. The project will be the first submitted under a new process that will require independent financial review by a third-party expert as part of the TIF evaluation.

Dover says the residential units will be marketed as rental apartments initially, because that’s what banks will finance, but they will likely become condominiums eventually.

Knoxville Mayor Madelina Rogero credited Dover with taking on some of the city’s hardest projects. Among them were Oakwood School, Knoxville High, and the Farragut Hotel, often utilizing local government incentives such as TIFs or payments in leiu of taxes (often called PILOTS).

“This is going to be a very challenging project,” Dover acknowledged of Pryor Brown. The garage roof is partially collapsed and it contains asbestos and lead paint. Dover says his firm has already started stabilizing the garage and has lined up construction financing so he’s ready to begin work very soon, and expects to take a year to complete the renovation.

Those who attended the press conference had a chance to wander up to the second floor along a tightly grooved concrete ramp. Water pooled on the floor and white paint peeled in sheets from the brick and cement blocks, but sun streamed in the huge windows, providing broad views of buildings like the federal courthouse. Dover pointed out the old manual turntable, where cars drove to be turned toward the right part of the garage by attendants. Dover remembers when the boys parked the cars, then grabbed the handle on a continuously looping vertical conveyor belt to ride it back down to the entrance from the upper floors.

The Conley family’s Royal Properties has owned the garage since the 1990s. The company sought to demolish it in 2013 but decided against it at the last minute.

“This is the outcome we’ve always wanted,” Conley said.