Going High and Low: Two Different Runs for Paddling on the Little River - The Knoxville Mercury 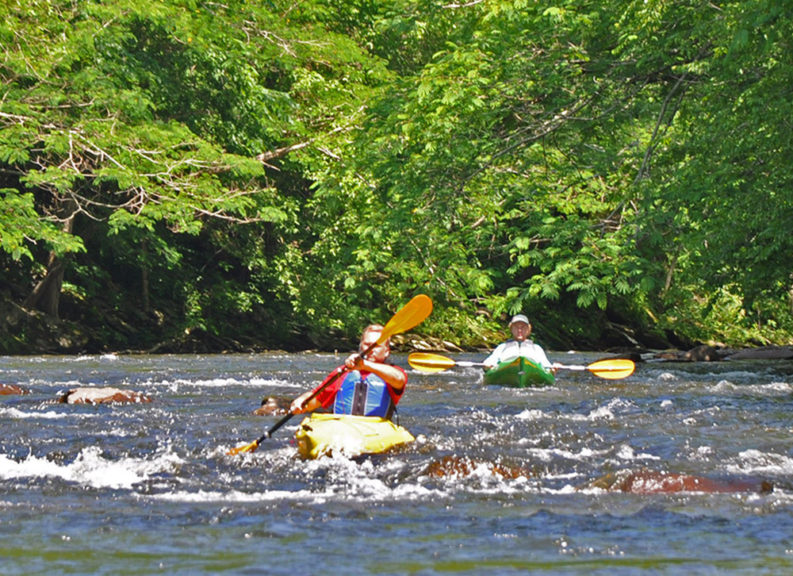 Paddling on moving water versus flat water tends to be more fun because of the surprises that pop up on a bending, swirling, wavy waterway. For example, a couple of minutes after putting in at Townsend on the Little River, I was surprised to find my boat pinned against a standing rock and filling up with cold water. I’d gone right when I should have gone left.

After disengaging from the rock and wading to a grassy island to empty my boat and catch my breath, I headed downstream again with a keener eye on the river’s mischief. This was the second of two shuttle trips that I took with Drew Crain and his son Jared on the Little River in May. Although the two trips are only a dozen or so miles apart, they offer strikingly different experiences on the same river, each of them in Blount County less than an hour from Knoxville.

The first trip, what I’ll call the lower run, starts at River John’s Outfitters (865-982-0793, riverjohns.com) northeast of Maryville and ends at the Alcoa Water Treatment Plant. The river gauge above Townsend was below 2 feet and a bit under 200 CFS (cubic feet per second). On this part of the river, with several easy shoals and rocky passages, the relatively low water would not be a concern.

River John’s has a mown lot and a bank that slopes down to sand bars where it’s easy to launch a kayak. He charges $10 to launch there and leave your vehicle, and he will also run a shuttle for you if you’re in one vehicle ($20). Drew and I were fishing for smallmouth in recreational kayaks 10 to 11 feet long. Jared, not fishing, scouted the crossings for us.

The fishing wasn’t great, but it was a relaxing run past farmland and steep rocky bluffs. I caught one bass about the size of a sardine while Drew caught a couple slightly larger, and lost a few that promised to be keepers. He blamed a dull hook for preventing him from landing these potential trophies.

We took our time, fishing on the long and frequent pools, bird watching (great blue herons, hawks, kingfishers, geese), turtle watching (one big snapping turtle), and exploring a cave, though it was Jared alone who was brave enough to back into the dark opening at our coaxing. It took us about three hours to float down to the water plant at Singleton Bend, a paddle of a little more than 4 miles. 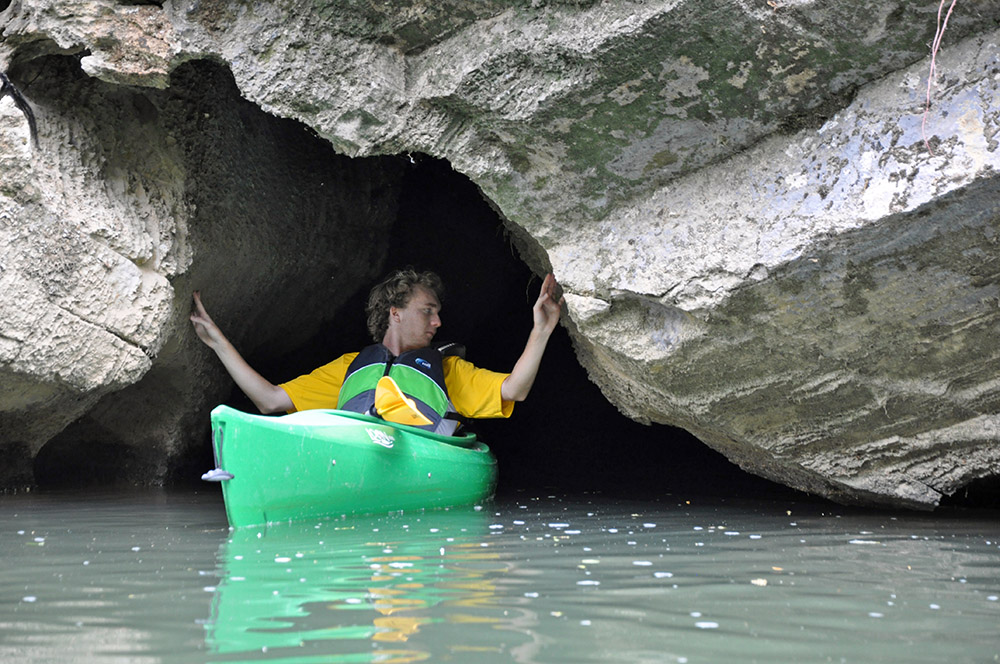 A couple of things to keep in mind on this run: at about the halfway point of the trip, you’ll see a small wooden cabin on the right bank and up ahead the tip of Brakebill Island. Take the left passage around the island; the right is blocked by deadfall.

A couple of miles later, when you see a concrete, tower-like structure on the left bank, look for the takeout ramp in the shady narrow chute just a few yards downstream of the tower.

Overall this is a gently flowing section with deep pools and plenty of time for fishing, photography, and daydreaming. Because there is very little development on this run, you’ll feel far away from traffic and commerce and dry land worries.

How to get to the lower run from Knoxville: Go to the end of Pellissippi Parkway and take a left on Highway 33. Go about a half-mile to a stoplight and take a right on Sam Houston School Road. Look for the water plant on your left and a chain link fence. When you see a gap in the fence and a gravel road, turn there and this will lead you to a small parking area near the river. This is the takeout, where I left my car.

The upper river run, starting in Townsend, is much more eventful. We ran it at about minimum flow. The gauge above Townsend was at about 2 feet, the current running at about 250 CFS (cubic feet per second). Any lower than this, and you’d be wading more than paddling.

While you don’t feel near as isolated on this run—with Highway 321 a continual presence on the left, Old Walland Highway on the right—the river itself is much wilder than on the lower run. Because of frequent shoals and shallow ledges and chutes, you have to continually scout the best passages and look for the “V” where the most water seems to be flowing. For me, scraping over rocks and gravel and bumping into boulders was fairly commonplace.

The river, so clear that you can see to the bottom of the deepest pools, had a mesmerizing effect on me as I watched it slide over rocks and raise its hackles into chop that splashed into my cockpit.

Downstream of the Cameron Road bridge, about a half-hour into our run, Drew had some luck fishing the eddies below the shoals. He caught two rainbow trout (stocked) on a rooster tail and farther downriver a hefty smallmouth.

After the Cameron Road bridge, we passed under a concrete foot bridge, and then a swinging foot bridge, the community of Kinzel Springs on the right bank. Not far downstream of the swinging bridge is a boulder field about a quarter mile long, which requires a lot of zigging and zagging at the level we were running the river.

Class V boater and kayak instructor Kirk Eddlemon, who gave me a lesson on this run, says that 450 to 800 CFS (at the Townsend gauge) is the optimal level for running this section in a recreational boat. Anything above that, he says, will be “pushy” for a non-whitewater paddler in a rec boat.

After a couple of miles, there’s a picnic area on the left bank, which requires a right passage around the island just downstream. Further on, you’ll see a cairn in the middle of the river, which means you’re a quarter mile or so from the takeout.

For a rec boater like me, this was an exhilarating run of about 4 miles that left my arms and back sore for a couple of days. It helped ease the pain that I did catch one rainbow (on a Little Cleo spoon) so that Crain didn’t skunk me.

To get to the Upper River from Knoxville: Take 321 north out of Maryville, as if you’re going to the Smokies. After 9 miles or so, take a left at Walland. You’re on Old Walland Highway. Cross the river and bear right. Take it slow on this road, popular with cyclists and bank fishers. After about a mile you’ll see the Foothills Parkway overpass (graffiti marks the spot) and a place to pull over on the right side of the road. This is your takeout where you can leave a vehicle.

To get to the put-in: Go on down Old Walland Highway about 4 miles to Cameron Road. Take a right and cross the river. Take a left on 321 and after about a half mile look for a parking lot/picnic area across from Apple Valley Country Store and Cafe for the put in. There is a dirt path leading down to the river and a good level spot at an eddy for launching.

A big help on each of these trips is the Little River Blueway map, available for free at, among other places, Uncle Lem’s Outfitters (865-357-8566, unclelems.com), REI (865-584-1938, rei.com), and River Sports Outfitters (865-523-0066, riversportsoutfitters.com) in Knoxville, and at Little River Trading Company (865-681-4141, littlerivertradingco.com) just outside Maryville on 321. With the map, created by the Little River Watershed Association (littleriverwatershed.org), you can create your own itineraries and discover a lot more about the river’s history and wildlife. 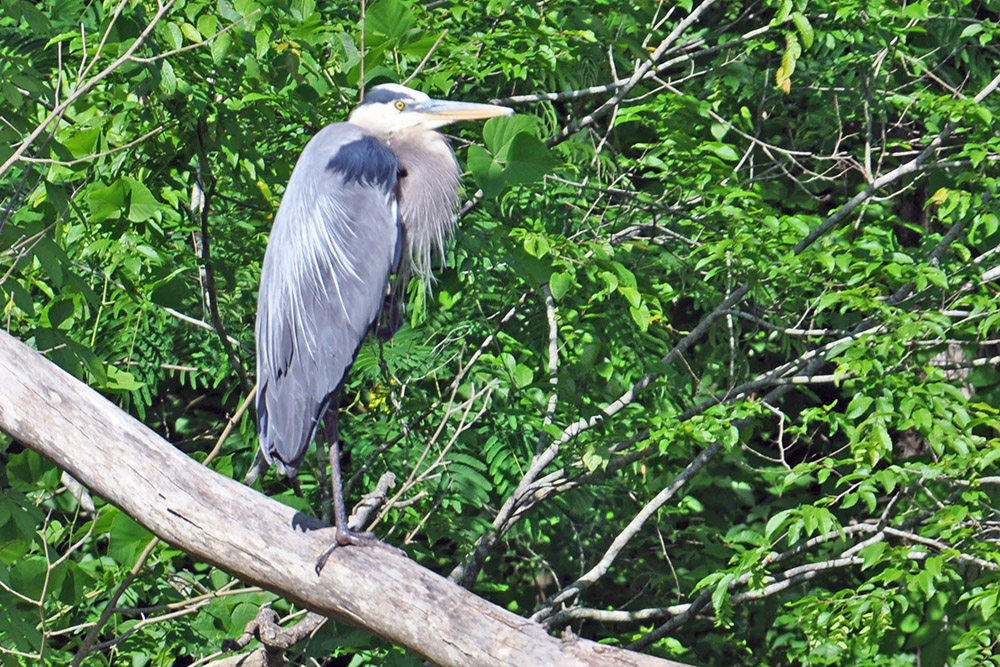