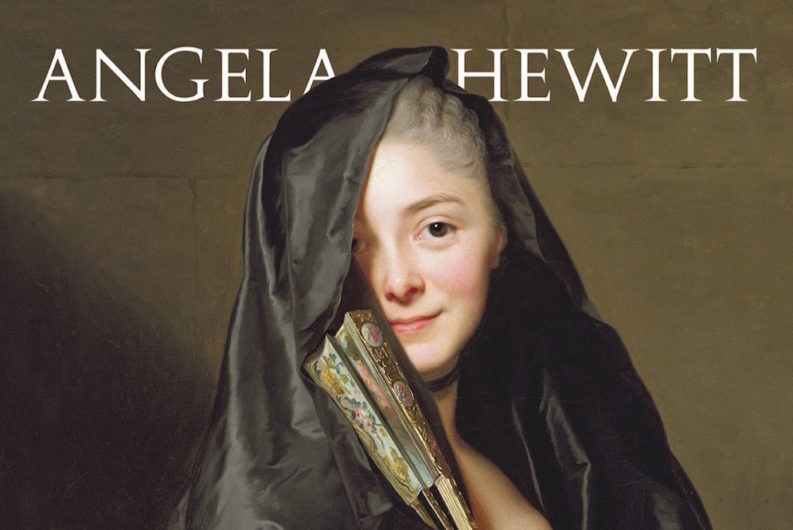 Phoenix Chorale and Kansas City Chorale, Charles Bruffy, conductor
Rachmaninoff: All-Night Vigil (Chandos, 2015)
This is one of the most beautiful pieces of choir music you’ll ever hear. You may well be familiar with it; KCPL owns two other CD versions and offers streaming access to three others. The primary source of emotional power within traditional Russian Orthodox choral music is the simple fact of unison singing—a large number of trained voices singing the same words in the same notes. Surely it’s coincidence that Rachmaninoff composed his deviant All-Night Vigil (also referred to as Vespers) just two years before the Russian revolution of 1917? To unison singing Rachmaninoff added polyphony, occasionally created by soloists singing with and over the choir. Conductor Charles Bruffy is musical director of both the Phoenix Chorale and the Kansas City Chorale. The decision to combine the two groups was either genius or obvious, and the result is breathtaking.

Angela Hewitt
Domenico Scarlatti: Sonatas (Hyperion, 2016)
Scarlatti did not invent the keyboard sonata. But he wrote 555 of them and lived and composed through the transition from the Baroque to the classical period (and from harpsichord to piano). So when many of us imagine the shape and spirit of a solo keyboard sonata, we hear Scarlatti. When assembled for recording or recital, Scarlatti’s sonatas are typically gathered in the arbitrary clusters he formed as he composed them. Since Scarlatti supported himself as a teacher, what you hear, then, often sounds like lessons and exercises. (A likely explanation for the uncommon beauty of the work is that he wrote many of them for his favorite pupil, Princess Maria of Spain, with whom he was apparently in love.) Angela Hewitt is a great ambassador on Scarlatti’s behalf. She breaks ranks and presents a program of 16 pieces, each chosen individually for its ability to complement or flatter the group. Following the ruminative “Sonata in B minor K. 87”—in which one can hear the foundation of the form and understand its appeal to a brooder like Beethoven—Hewitt races through the “Sonata in D major K. 29,” with all of its scales and Italianate filigree of looping trills.

Rachel Barton Pine
Beethoven and Clement Violin Concertos (Cedille Records, 2008)
Franz Clement is little known now; this is the first recording of his Violin Concerto in D major. During his lifetime (1780-1842), Clement was known less as a composer than as a conductor and virtuoso violinist—he began his career as a child prodigy. Here, in Clement’s own concerto, you see what a confident and capable soloist gives himself to perform. Rachel Barton Pine keeps her instrument far out in front of the Royal Philharmonic Orchestra, conducted by José Serebrier, and almost everything the orchestra plays sends attention back to the soloist. Her part requires her to be delightfully selfish, and no one will object. The familiar Beethoven Violin Concerto in D major is included here because Clement, friend to Beethoven, commissioned the concerto. According to online sources, Beethoven delivered the score at the last minute, and Clement performed its premier without rehearsing.

Youssou N’Dour et la Super Etoile de Dakar
Fatteliku (Live in Athens 1987) (Real World Records, 2015)
This concert was recorded in in 1987. It captures Senegalese superstar Youssou N’Dour and his troupe of dancers and drummers when they opened for Peter Gabriel’s So tour and then stole the show each night by joining Gabriel for “In Your Eyes.” N’Dour rarely tours these days. When he does, it’s usually soccer stadiums in other parts of the world. He’s Muslim, and he’s been outspoken in his distaste for America’s apparent Islamaphobia. But there was a brief tick between N’Dour’s debut as a 20-year-old unknown and his meteoric rise to become the owner of Afropop, and I saw this band at a Detroit lodge hall full of African expatriates. I mostly remember audience members in royal garb dancing circles around the room, dropping exotic currency at the feet of the performers, a rainbow haze over the stage formed by the airborne splinters of drumsticks, and a squat, pre-war building that shook but remained impressively intact.