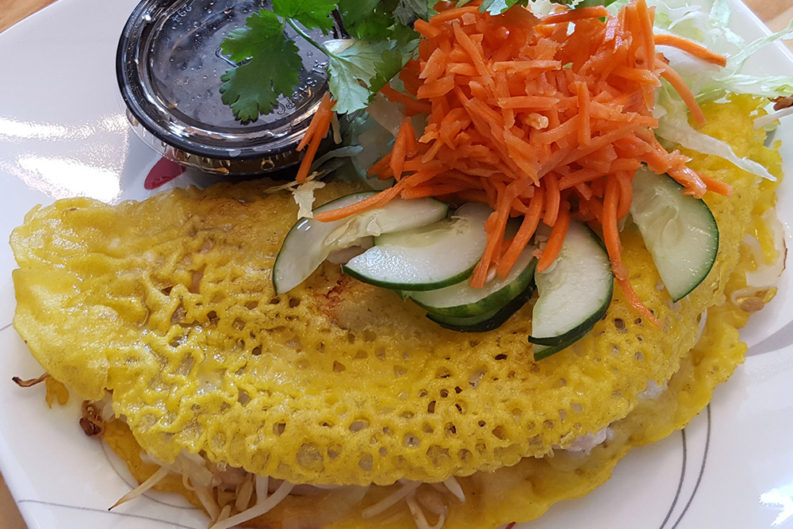 I’m not sure whether I’m a reliable witness for much of anything that happened in Knoxville during the ’90s. Fresh from college, I was in the midst of an experiential feast that introduced me to the pleasures (and pains) of life’s many indulgences. Still, certain things stand out clearly—especially the salty, sweet funk of my first taste of nuac mam. It was my earliest experience with an authentic Asian flavor—I do not count the endless platters of moo goo gai pan that marked my teenage years—and it came from what may have been Knoxville’s first Vietnamese restaurant, T. Ho. It was an unlikely place to find on Merchant Drive at the time, but that made its closure in 2007 all the more lamentable.

But here we are, almost a decade later, and T. Ho Fresh Vietnamese Kitchen has returned with a different look and a pared down menu. And, despite the intervening years, the new T. Ho seems to have recaptured much of its old magic and rekindled old friendships while making new ones, too.

Brothers Thoai and Thuc Ho revived their father Thanh’s business in March of this year, right next door to its former digs in the same commercial strip where the restaurant operated for 20 years; the original space is still occupied by the Pint House, which the brothers opened after Thanh retired. While they’re certainly involved and often visible at the restaurant, the first face you’re likely to see when you visit belongs to Omar Delgado; he’s a garrulous and friendly manager who’s also making your food right there in front of you. Both the recipes and his training come directly from Thanh, who still makes the sauces that endeared the restaurant to its original fan base; he can sometimes even be found manning the stove, as he was on my very first visit.

The new T. Ho has a modern, get-up-and-go appearance that’s reminiscent of a mall food court. One communal table for six is complemented by counters and stools that line the large windows, giving the place an open and sunny disposition. On several of my visits, other customers have been eager to chat and share memories of the old place, making comparisons to the food of yore. Still, most guests don’t stay too long because the place does a good bit of take-out business—and it shows in the investment in the packaging, all sturdy plastic that I wash and keep; it’s of better quality than most of the grocery-shelf storage stuff that has accumulated in my cabinets. 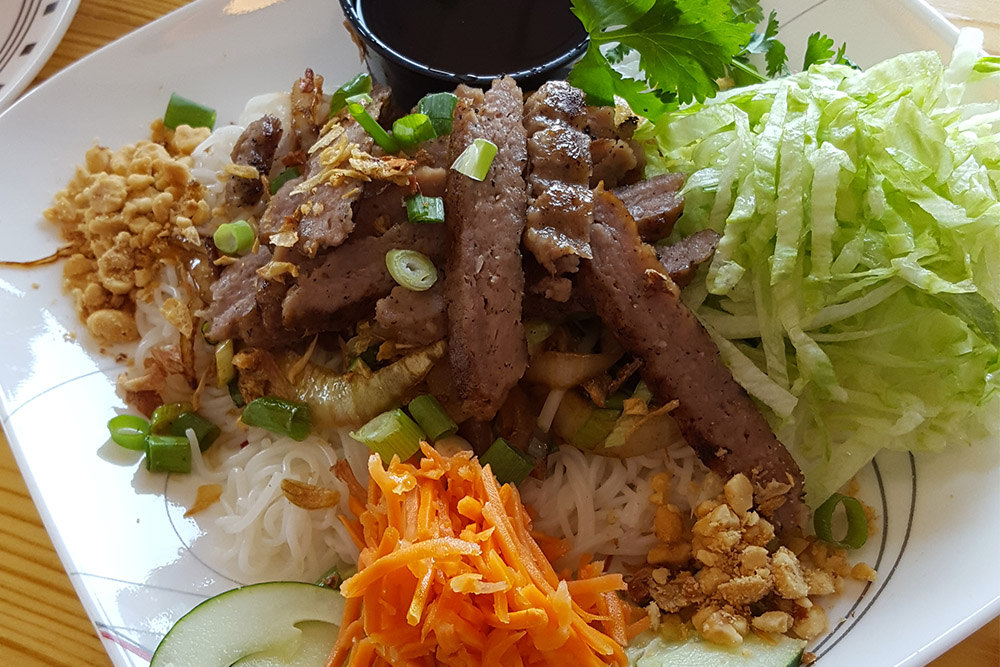 The menu has been cut back to just a handful of items, and the idea behind the T. Ho revival comes from the notion of street food. The casual, quick service idea works within reason, though the proliferation of plastic cutlery distresses the environmentalist in me. And, since all the food is made fresh to order, things can get bogged down but never for very long.

The Brothers Ho devised a two-step ordering system: Pick your entrée, then pick your protein. The advantage is that you can personalize your order by choosing your own vegetables (from sprouts to red peppers and more), though I’ve found that just asking for whatever is authentic yields better results than exerting my own ideas about what will or won’t make my meal tastier.

Pho, vermicelli noodles, a crepe, and basil rolls are available with a choice of shrimp, beef, tofu, chicken, or grilled pork. While all the protein choices are just fine—though the tofu is particularly boring (even for tofu)—grilled pork is the tastiest option by far. Ground pork is seasoned, shaped, and grilled in-house and forms the foundation of many fond T. Ho memories. In fact, Delgado says, it is the basil roll (once called the grilled meatball roll) that most people remember and want to eat again.

Wrapped in delicate rice paper, the basil roll with grilled pork, when dipped in the accompanying sauce, thrills from the first bite. Think of the light chewy wrapper giving way to crunchy vegetables followed by a nearly unctuous mouthful of well-seasoned pork, all punctuated by little bursts of sweetness from tiny shards of pineapple that are mixed into the veggies. The sauce, which Omar just calls fish sauce, is a kind of nuac mam with vinegar and spices that you simply must try. And if you’re afraid of the fish sauce, get over it—for it is the key to happiness itself in this cuisine. It’s not an overly fishy condiment once tempered by the other additions to the sauce, and it features an incredible concentration of umami: the fifth flavor, best described as deliciousness.

This sauce, served on the side, is also essential to the crepe—a light and crispy rice-flour concoction stuffed with bean sprouts, mushrooms, and onions. The stuffing itself is unseasoned and the wrapper has a touch of turmeric but not much else. A healthy splash of fish sauce elevates each bite into a savory, nearly addictive mouthful.

Vermicelli noodles, too, get a lift from the sauce that binds together the freshness and crunch of the veggies with extra punch and flavor from ground peanuts and chewy bites of fried onion. On occasion, the noodles have been a little gummy, but it’s never a ruinous moment—just pick them up for a quick dunk in the sauce and chew onward. 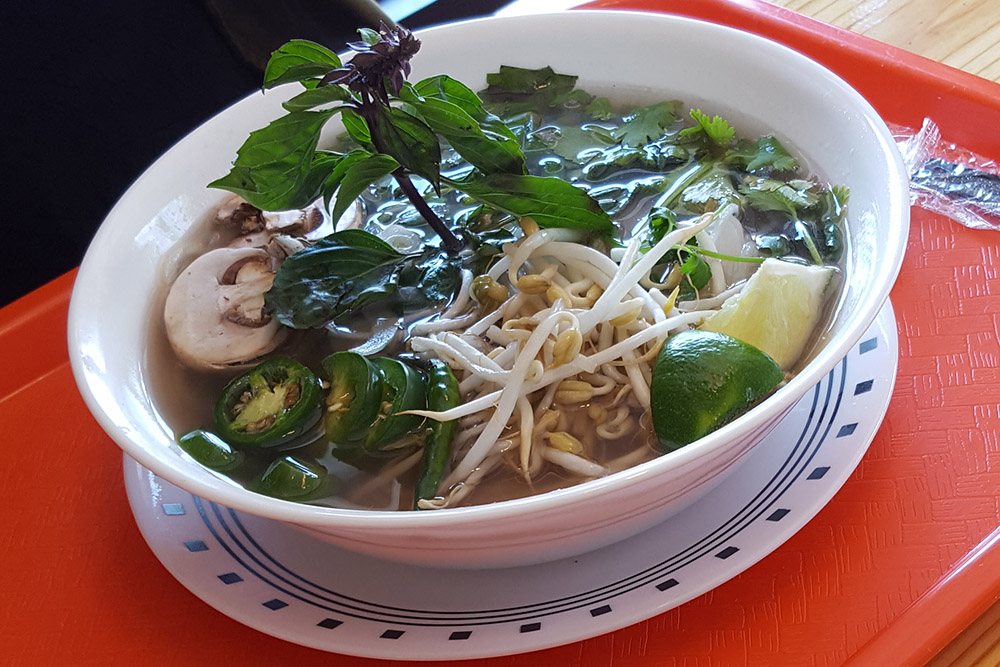 The pho soup is fast and flavorful and includes everything that you might add to it for yourself at other restaurants in town—there is no accompanying plate of culantro, basil, jalapeño, etc. The only concession to customization is the sriracha bottle that sits on the table and counters—right beside the diner-style napkin dispensers filled with flimsy wipes that are hardly up to the task of keeping messy eaters neat. The pho is good, though I learned the hard way that it’s wise to remove the lime quarters—by the end of my meal the broth had taken on a bitter edge from the citrus peel. Even so, it’s enjoyable and lively—a quality that’s enhanced by a generous addition of fresh jalapeño slices.

Although the fast-food atmosphere leaves much to be desired, the freshness and flavor of the cuisine makes this reboot a success. It may be the finest food addition to this part of town since, well, since it opened the first time.