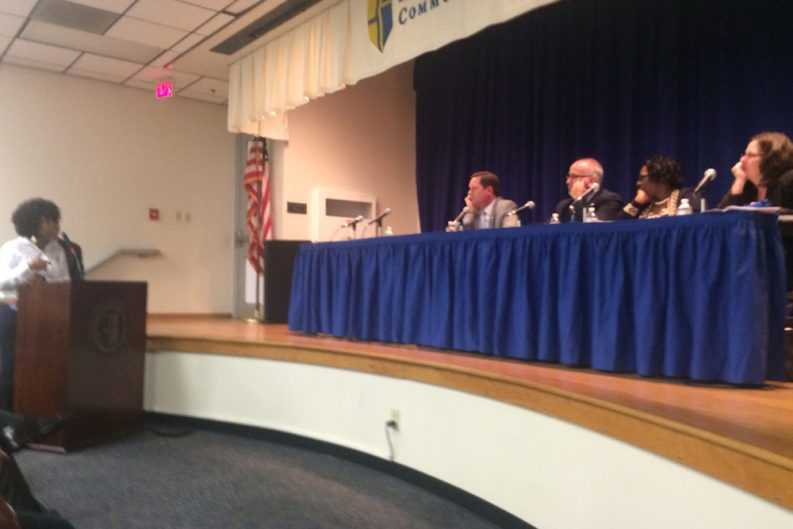 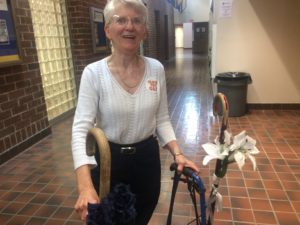 Louise McKown and her flower-adorned walker moved slowly down the hall of the J.L. Goins Administrative Building at Pellissippi State the evening of May 19. She was there to voice her support for any effort to help some 300,000 people without health-care coverage in Tennessee. The 66-year-old McKown, of Oak Ridge, is now covered by Medicare, but her struggle to find subsidized health care more than 20 years ago made her a lifetime ally of those seeking coverage for the poor.

“I’ve been in this battle since 1994,” she said after sitting through a two-hour meeting of the 3-Star Healthy Project, a controversial task force empaneled by state House Speaker Beth Harwell to seek ways to help close the “coverage gap” facing Tennesseans frozen out of both the state Medicaid program and coverage available through the federal Affordable Care Act. These “working poor” make too much for state coverage and too little to receive tax credits for ACA coverage.

One presumption in planning the ACA was the expansion of state Medicaid to provide coverage for the poor. But in Tennessee and other states, that did not occur.

After GOP General Assembly members killed Gov. Bill Haslam’s Insure Tennessee, a health insurance model for TennCare, they faced calls to take action themselves—so Harwell announced at an April 12 press conference the creation of “a task force that will delve into these ideas and formulate a specific proposal.”

The 3-Star Healthy Project will present its recommendations to the federal Centers for Medicare and Medicaid in June. From there, the plan is to set up a series of pilot programs to test the validity and financial impacts of different ideas, where successful initiatives can be phased in state-wide over time and those that don’t pan out (or where costs overrun projections) can be killed. The task force is also establishing “circuit breakers,” or financial caps that will automatically end pilot programs if the state’s share of costs increases above a certain amount. What those caps may be, or how much testing these programs might cost, is at this point still unknown.

Democrats promptly blistered Harwell’s task force, with House Democratic Caucus Chairman Rep. Mike Stewart calling it “a political charade.” Todd Shelton of the Tennessee Health Care Campaign says he and other advocates for expanding TennCare are “pretty discouraged. It seems they are looking at some piecemeal approaches,” which would only provide coverage to a fraction of those in need, and which the federal government may reject. He noted that polling by Vanderbilt University indicated 64 percent of registered voters supported the ill-fated Insure Tennessee expansion plan, and “the public has really been potentially discarded,” by state GOP leadership and the task force itself.

“We feel like basically they are kicking the can down the road,” Shelton says.

McKown didn’t much like what she heard last week, either—especially the emphasis on preventative care and ideas such as setting up health savings accounts for the indigent and working poor. That idea was described by health-care professionals at the meeting as unworkable—that it’s unrealistic to expect the working poor to accrue money in such an account and also pay copays on top of that. But it is one of three specific points the panel is tasked with, along with the preventative-care measures and work-placement assistance so people can receive private insurance plans.

The panel—which on May 19 included Knoxville Republican Rep. Roger Kane, Crossville Republican Rep. Cameron Sexton, and Memphis Democrat Rep. Karen Camper—refereed discussions ranging from the importance of smoking cessation to obesity and substance abuse prevention, as well as the need for more primary care providers in the state.

McKown thinks the panel missed a crucial health-care reality: Sometimes catastrophe strikes. In her case it was a progressive neurological disease called olivopontocerebellar atrophy (OPCA) she was diagnosed with in 1989. “You know what? I’m not overweight. I didn’t smoke, I didn’t do drugs… Please. Enough is enough,” said McKown, who first took on the mantle of health-care reform when she went without care for a few months after her COBRA coverage expired in 1994 and she had to desperately search for a willing insurer. She advocates a single-payer system, and “we’ll get over this business of funding the gap.”

She and dozens of others at the committee meeting sported “Close the Gap” stickers. That same simple message was communicated to lawmakers by silent protesters standing at the rear of an auditorium holding a banner.

Most of the Knoxville-area health-care providers and executives who offered testimony to the panel and provided materials for the record shared a similar theme: East Tennessee health care is in a world of hurt.

While recent figures based upon University of Tennessee research suggest 8.2 percent of the state population is now without health insurance, “every county in East Tennessee is far above 8 percent in uninsured (adults),” said Ben Harrington, executive director of the Mental Health Association of Tennessee. He said the number of uninsured is about 14 percent in Knox County, and is higher in nearby, more rural counties.

“Starting a pilot program and trying to chip away at 5-10 percent [of the uninsured population] isn’t going to help these folks one bit,” Harrington said.

Kane said any initial pilot program based upon task force recommendations would include about 150,000 people. “We understand that the working poor, there’s really no other option for them,” he said. He noted “at this point there are a lot of variables we are working with.”

“We want to have a phased-in approach,” Sexton said in response to Bo Carey, a small-business owner and member of the National Federation of Independent Business who told the panel other members were “wary” of an expansion of government-subsidized health-care in Tennessee. “I think anything we come up with, there will be measurable outcomes.”

Executives and health-care providers from the University of Tennessee Medical Center, Covenant, Tennova Healthcare, and Cherokee Health System concurred on the need to expand health services, bolster primary care networks, and adopt, in many cases, a case-management system for more vulnerable patients. This would likely limit visits to the ER for nonemergency ailments—a major source of monetary hemorrhage for hospitals.

“I think we all agree that the problem is not access to care,” said David Hall, chief operating officer of UT Medical Center. “It’s where and when people receive that care.” Often, those lacking a primary care physician will wait for treatment “until they’re really, really sick.” He said more than 13,000 annual patient “encounters” at UTMC were with the uninsured, and 85 percent of those originated in the emergency department. This cost the medical system $19 million a year, money that otherwise would “be able to be invested back in our community,” he said.

Mental-health needs have also driven discussion. Knoxville Police Department Deputy Police Chief Gary Holliday said more money is needed to fund a successful program in behavioral-health-based judicial diversions. The Knoxville Early Diversion Program is a $398,000 grant-funded collaboration with Helen Ross McNabb Center. Those charged with misdemeanor public disorder crimes are evaluated for behavioral health issues, including substance abuse, and are given the option to receive treatment in exchange for diversion of the case and ultimate dismissal of charges, Holliday said.

“It’s good to keep folks out of jail,” Holliday said, and the program has yielded a cost savings of $110,000 over three years. But the grant money “left us quickly,” largely because of the cost of providing health services to those in the program.

The traveling 3-Star Healthy Project panel—the legislative task force has also met in Johnson City, Nashville, and Memphis—has been besieged by numbers, but one doctor who provided testimony said raw statistics should not cast a shadow over the real purpose of trying to close the health-care gap.

“We really want to emphasize that we are talking about people,” she said.

Rep. Camper said after the meeting that failure to close the public insurance gap means “we’ll lose some of our rural hospitals,” and that common themes heard throughout the state include issues of “co-morbidity”—when a person has multiple health problems at once—worries from businesses about health-insurance costs and the need for better mental-health coverage.

She urged those in attendance to “be positive. We’re not doing this just for show.”

Sexton, the task force chairman, who also serves as the state House Health Committee chairman, called for patience as the panel works on a solution: “We know how high the mountain is; we’re willing to climb it, we just need a little time to get it right.”